I spent last Thursday through Sunday in idyllic Lakeside, Ohio on the shores of Lake Erie and was joined by nearly 1,000 other folks for much of that time. We were there for the Midwest Birding Symposium, which for the fourth time MBS bedded down in Lakeside (1997, 1999, 2009, 2011).
I've been to many a birding festival/symposium/conference but MBS rules the roost in sheer grandeur and attention to detail. There is really nothing quite like it, and I wanted to share some thoughts on the MBS just past.
I owe a BIG THANK YOU to Nina Harfmann of Nature Remains, who kindly lent me ALL photos used in this post. I took none. That's right - zilch. I was so busy leading field excursions, emceeing talks and ribbon-cuttings, giving a program, and catching up with dozens of people from all over the place that I never produced a camera at the event itself. But Nina takes fine photos, and she photo-documented the whole affair. 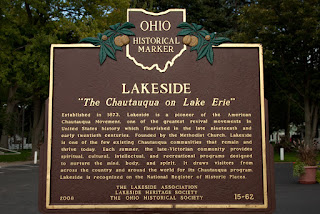 Lakeside is a tranquil gated community on the Marblehead Peninsula, and home to the MBS. Founded in 1873, Lakeside is a Chautauqua community, and as such, promotes intellectual, cultural, educational, and recreational pursuits, all under the mantle of Methodist religious values.

They let me in anyway.

For a birding venue such as the MBS, there could not be a finer place. We come just after the peak season, and as many Lakesiders are seasonal dwellers, there is an abundance of cottages available for rent. When MBS is at full whirl, it is like a town overtaken and conquered by bird watchers.

I have to give major props to Kevin Sibbring and everyone else in the Lakeside adminstration. They are the best. The Lakesiders give their all to welcome all of us, and are organizational geniuses. Not only that, but they mobilize an entire troop of Lakeside residents as volunteers. Easily identified by their green hats, the Lakeside volunteers provide golf cart shuttle services, serve food, organize venues, and help with a multitude of other tasks. As did the other major sponsors, Bird Watcher's Digest and the Ohio Ornithological Society. Hats off to everyone involved. A common sentiment that I heard over and over was that the MBS is the best run and most fun of ANY birding festival. 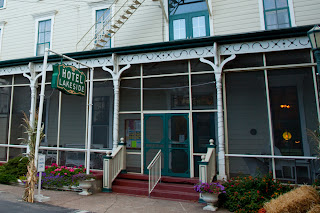 Many of us stayed at the Hotel Lakeside, which is a stone's throw from Lake Erie and smack in the heart of Lakeside. It's a cool old place, and I do mean old - the hotel went up in 1875. It even has a friendly ghost, Susan. I didn't see or hear her, but then again, I have a habit of sleeping with the lights on, a pillow over my head, and making loud humming noises until I fall asleep when in haunted hotels. 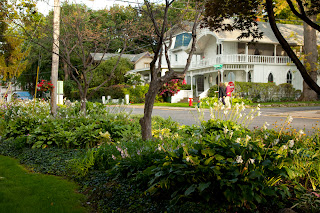 Huge chinkapin oaks and other mature trees shade Lakeside, and one can find plenty of migrants just by strolling the streets. There's no great worry about getting mowed down by speeding cars, either - golf carts and bicycles outnumber four-wheelers. 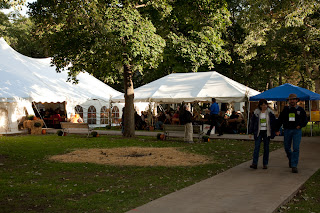 The MBS organizing committee nearly tripled the number of vendors at MBS as compared to 2009. This necessitated the erection of several large tents, in addition to using a large building. It was great, everything related to birding that one could desire was somewhere in the mix. Tour companies, optics vendors, artisans, non-profits, bird rehabbers, book sellers - you name it. 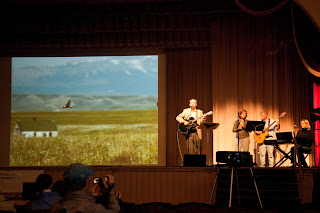 When you've got nearly 1,000 birders together, it takes a substantial hall to get them together in one place. Hoover Auditorium fills the bill. It can seat a few thousand and that's where we'd go for keynote speakers and other events. Bill Thompson - far left with guitar - served as emcee and there is no one better. In fact, the entire Thompson clan - they own and operate Bird Watcher's Digest - were all present and they're the hub from which the spokes of MBS radiate. Without the Thompson's, there would be no MBS in Ohio. And because of the Thomspon's, MBS is the benchmark to which other like events aspire.

A lot of cool things happened on that stage in Hoover Auditorium. In the photo above, the Rain Crows perform a number for the crowd. The band is, from left: Bill Thompson, Julie Zickefoose, Craig Gibbs, and Wendy Eller. On Saturday night, we also set a Guiness Book of World Records approved world record. I'm not kidding. I, I am proud to have you know, was a part of this rather wacky thing. We - 802 officially counted and authenticated participants - simultaneously did a Barred Owl call. This effort easily smashed the previous record and that wasn't too hard as there was none. But now the bar has been set and it is high. 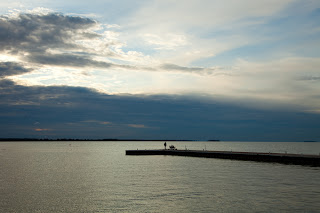 A long pier juts far into Lake Erie from Lakeside's backyard. From here you can easily see South Bass Island a bit to the west, and Kelleys Island to the east of that. Interesting birds are also seen here. Michael O'Brien led a nighttime trip onto the dock to teach people the various lisps, twits, zits, and peeps of nocturnal songbird migrants passing over in the dark. And the boys from Leica conducted a lake watch, with Cameron Cox spotting the best bird: a flyby Red-necked Phalarope. 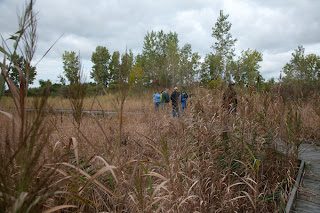 Stellar birders staff nearby birding hotspots on Friday and Saturday morning. The above is a wetland at East Harbor State Park, and I was one of the leaders at this locale. Our crews had lots of birds, including a few large mixed flocks comprised of hundreds of Cedar Waxwings, and a dozen or so species of warblers with other songbirds mixed in. Of course, some non-bird organisms were inspected such as a meadow full of nodding ladies'-tresses orchids, Spiranthes cernua. 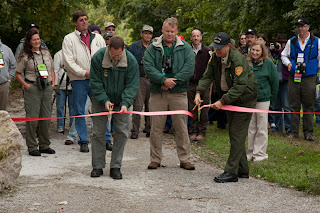 We took a little time to have a ceremony and ribbon-cutting for the brand new Ohio Lake Erie Birding Trail at East Harbor on Friday morning. Wielding the scissors is Scott Butterworth, left, who is District Wildlife Manager for the Ohio Division of Wildlife, and Ina Brolis, manager of East Harbor State Park. The trail is the creation of the Ohio Division of Wildlife with the help of many partners, and features 84 sites all along Ohio's 312 miles of Lake Erie shoreline. 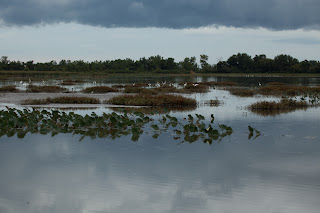 A smattering of egrets brighten a wetland at Ottawa National Wildlife in this gorgeous image. Ottawa was also an MBS birding locale.

There is no way I can encapsulate three jam-packed days involving myriad speakers and events, and attended by some 1,000 birders from 37 states and a half-dozen countries into one blog post and even begin to do it justice. Suffice to say, we had a lot of fun, learned a lot and met scores of great people. Oh, I should also mention that generous birders raised about $12,000 for conservation. That was augmented by $10,000 from the Ohio Ornithological Society for a total of $22,000. Not bad! These funds will go to help further conservation efforts at Meadowbrook Marsh. If you're an Ohio birder - or even if not - JOIN the Ohio Ornithological Society. Groups that go to great lengths to further birding and conservation deserve our support.

I am pleased to report that the Midwest Birding Symposium will once again return to Lakeside in September 2013. Be there!

Thanks again to Nina Harfmann for the use of her great photos.
at September 22, 2011

Wonderful to have met you there Jim. What a great event indeed! By the way, I stayed in the WoHoMis Lodge...and I know that place is haunted!!!

Ditto that, Robert - great to finally have met you as well!

Jim, glad the MBS went well - I'm still very bummed I missed it this year. The 2009 symposium was phenomenal! There's always next year...