First off, I know that many people who regularly scan this blog will be up at Midwest Birding Symposium this weekend. I look forward to seeing everyone. My talk is Saturday at 2 pm in Hoover Auditorium, and is entitled Birders Going Beyond Birds. I've had a lot of fun putting that together, and weaving together a tale of things great and small, birds, people, conservation, and how the pieces interconnect. It'll have a lot of the elements that you see in this blog.
Gary Meszaros kindly sent along this gorgeous photo of one of the oddest and most storied plants in the eastern United States. Read on... 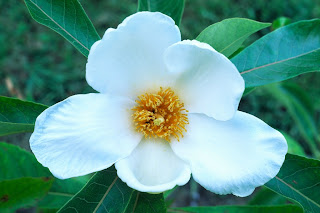 Photo: Gary Meszaros
During a recent trip to a botanical garden, Gary snapped this beautiful image of Franklinia alatamaha, or just Franklinia, for short. It is a captivating plant, with showy, pleasantly aromatic flowers that bloom in fall. The foliage turns to a bright crimson about now, often forming a striking backdrop to the snowy blossoms. Franklinia belongs to the small (in North America)  tea family (Theaceae). The genus name honors one of America's greats, Benjamin Franklin.

Today, Franklinia only exists in cultivation. It was first discovered in 1765 in Georgia, along the banks of the Alatamaha River in Georgia by the legendary Philadelphia botanists John and William Bartram. They must have had fits upon first seeing this beautiful treelet in its full glory. The Bartrams had traveled far and wide in the east, and made numerous collections. They knew instantly that the plant which came to be known as Franklinia was new.

In spite of intensive searching, neither the Bartrams nor anyone else was able to find Franklinia beyond the tiny area in which it was first discovered. On later trips, William Bartram harvested seed, and by the early 1780's had managed to grow plants to maturity. The last indisputable observation of Franklinia in its wild haunts was in 1803. For reasons unknown, this stunning species slipped over the brink and vanished from the wild just a scant 38 years after its initial discovery. At the time of his initial discovery, Bartram recorded this about the plant: "at this place there are two or 3 acres of ground where it grows plentifully."

The demise of wild Franklinia may always remain a mystery, but fortunately it lives on in cultivation, thanks to Bartram's collection and propagation of seeds. When we see a Franklinia tree, such as in Gary's photo, it is a direct descendent of the material brought to Philadelphia from the banks of the Alatamaha by William Bartram well over 200 years ago.
at September 14, 2011

I saw them blooming at Bartram's Garden in Philadelphia a few years ago. They are stunning.

There was a postage stamp that featured it. http://www.franklinia.com/franklinialinks.html