Two amphibians: One bold, the other bashful

My recent forays into the depths of southern Ohio have produced many interesting animals, including the two that follow. 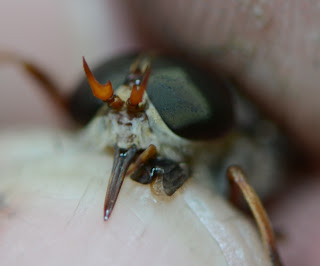 Before we get to the goodies, ever wondered why horsefly bites hurt so much? We captured this large specimen, presumably in the genus Tabanus, and made some photos of its piercing and sucking parts. Take a gander at the dagger of a proboscis stuck to its face! That's what it jabs into your flesh and rasps you with until you bleed. Small wonder that these little pests even send large horses into conniptions. I made a post with more detail about these six-legged tormentors HERE, should you want to know more. 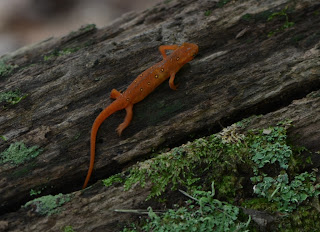 Aha! An orange salamander, boldly traipsing about the forest floor in broad daylight. It could only be a red eft, the larval form of the red-spotted newt, Notopthalmus viridescens. 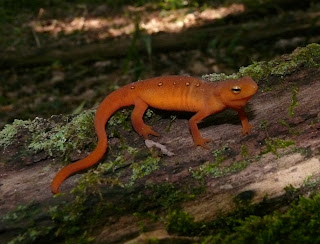 Red efts are fearless, to wax unabashedly anthropomorphic, because they are poisonous. Highly poisonous.


Fillet of fenny snake,
In the caldron boil and bake;
Eye of newt, and toe of frog,
Wool of bat, and tongue of dog,
Adders' fork, and blind-worms sting,
Lizards's leg, and howlet's wing,
For a charm of powerful trouble,
Like a hell-broth boil and bubble.
Excerpted from Macbeth, by William Shakespeare. Bill was onto something, by having his witches cast newt eyes into their foul broth. Newt or eft parts would certainly add a potent dash of tetrodotoxin, the toxic chemical that protects these little salamanders from evil-doers. 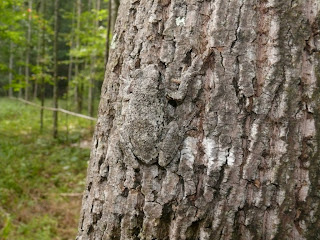 This amphibian, contrary to the eft, hides very well and its coloration is quite the contrast to an orange salamander. 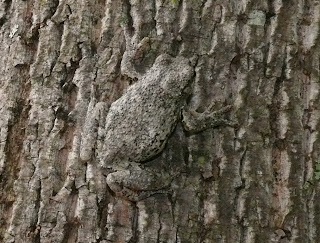 Gray treefrogs, Hyla versicolor, are chameleonlike and can change color to blend with their surroundings. This one is stuck to a tulip tree, and it meshes well with the grayish bark of the trunk. 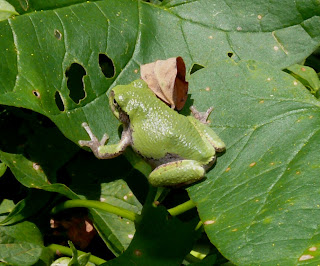 Here's a gray treefrog - same species - that we had found a few days earlier. Its coloration is a jarring contrast to the drab gray hues of the animal in the preceding photo. This one was spending time on leafy material, and wisely shifted over to matching shades of green.
at September 03, 2011