Last Thursday, I found myself on an expedition to look for birds in Mohican State Forest. We are near the height of passage for many songbirds, such as warblers. At one point, we were in an opening in an upland oak-hickory forest when we encountered a large mixed flock. The Red-eyed Vireos caught our attention first. In all, we tallied three dozen or more, all visible at once. They were joined by a Yellow-throated Vireo and a smattering of warblers: Bay-breasted, Blackpoll, Blackburnian, Black-throated Green, Chestnut-sided.
The vireos, especially, are complete caterpillar-hawks. Neotropical songbirds such as those listed above move south from the breeding grounds at the peak of caterpillar abundance, and that's no coincidence. Caterpillars are BY FAR the largest group of herbivores in the eastern deciduous forest, and long-distance migrant songbirds snap them up by the billions, collectively.
During lulls in the birding, we turned our eyes to the foliage and were able to find several of our more interesting caterpillars. 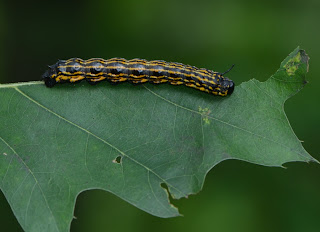 This big beauty sports the colors of Halloween. It is an orange-striped oakworm, Anisota senatoria. They're big enough that at least some songbirds would probably leave it be. A Chestnut-sided Warbler wrestling with this thing would be akin to an infant trying to wolf down a foot long hotdog. Orange-striped oakworms are especially fond of dining on red oak, Quercus rubra, and that's exactly what we found this one eating. 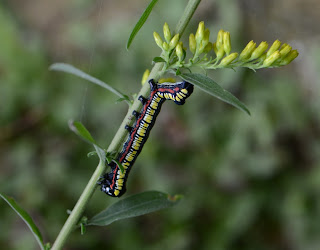 One of our most striking caterpillars is the brown-hooded owlet, Cucullia convexipennis. I can see why David Wagner chose this as one of the three species that graces the cover of his masterpiece, the Caterpillars of Eastern North America. Brown-hooded owlets shun trees, and should be sought feeding on goldenrods or asters. This one was found on gray goldenrod, Solidago nemoralis. 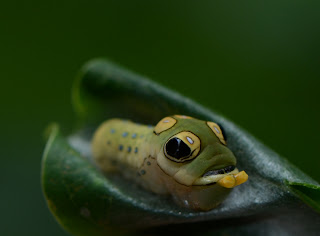 This spicebush swallowtail caterpillar, Papilio troilus, is not sticking its tongue out at you. Those orange-yellow horns are called osmeteria, and the caterpillar uses them in an attempt to ward off would-be predators. When disturbed, the spicebush cat shoots them out with great rapidity, like a switchblade suddenly snicked open. That ploy, coupled with the scary snakelike eye patches, might be just enough to startle off hungry songbirds. It doesn't work on parasitoid flies and wasps, however. We found several last instar - final growth stage - caterpillars in this spicebush, and all seemed quite depauperate. They were probably infested with parasitoid larvae. 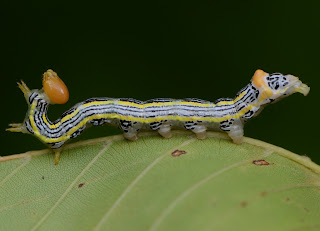 Looking a bit like a prancing steed, this red-humped oakworm, Symmerista canicosta, is a study in ornate patterning and intriguing form. As the name suggests, they prefer oaks, and sometimes break out in such numbers that the caterpillars cause localized defoliation. While supposedly confined to plants in the Fagaceae family, this one was found on witch-hazel, Hamamelis virginiana. However, there are some similar species and I may have the identification wrong. Let me know, if you know better. 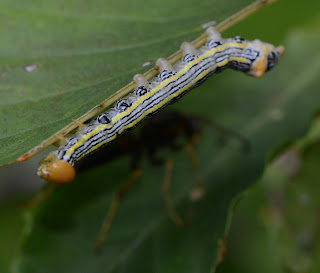 A potential grim reaper lurks in the shadows. While we were making photos of this oakworm, a paper wasp, probably Polistes fuscatus, dropped in and began searching the foliage. These wasps capture caterpillars, chew them up, and feed the masticated remnants to their grubs. Interestingly, the wasp did not seem interested in this red-humped oakworm. At one point it came so near to the caterpillar that it had to be aware of it. It may be that the oakworm is chemically prtoected in such a way that some predators avoid them. Or perhaps the oakworm was just a bit too large for the wasp to manage. 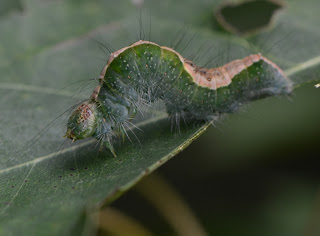 Bizarre and humped like a camel, this streaked dagger, Acronicta lithospila, was a treat to encounter. This one was eating red oak, and was in an area where there was intense caterpillar activity. We found it and many other caterpillars along a roadside opening in a mature forest, with plenty of young sapling-sized trees. Caterpillar hunting is often the most productive in such sites - not so much in uniformly mature forests. 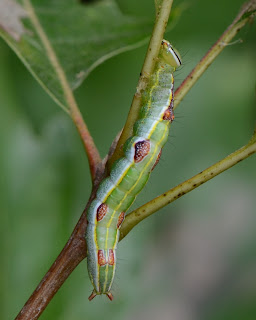 A few feet from the streaked dagger, we found this gorgeous variable oakleaf caterpillar, Lochmaeus manteo. It also was consuming red oak foliage. While we only saw this one in a quick search, variable oakleaf caterpillars are cyclically irruptive. In a boom year, according to Wagner, they can be so plentiful as to produce a steady fecal rain - their hard pellets falling by the score to the forest floor.
at September 10, 2011

Email ThisBlogThis!Share to TwitterShare to FacebookShare to Pinterest
Labels: caterpillars