No, I'm not talking about a disgruntled Ohio State Buckeye fan. Or an abnormally pigmented nut from a tree. The subject is the common buckeye, Junonia coenia, one of our showier butterflies. Buckeyes wander northward in late summer and fall, and we get variable numbers of them in Ohio from year to year. Last year was a boom year; this season has brought another bumper crop. If you watch butterflies at all, you're no doubt familiar with this ornately marked species.
But you may not be familiar with blue ones. I wasn't. Brad Deering kindly shared the following photo of a luxuriantly colored specimen that he found yesterday in central Ohio. 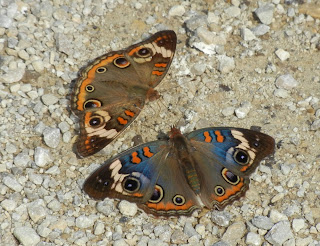 Photo: Brad Deering
Our colorful buckeye in repose and upstaging a normally colored buckeye. Quite the showstopper, eh? Buckeyes often have a bluish wash on the forewing, near those two orange bars, but nothing to the extent of this specimen. I imagine this individual is merely an exceptional example of blue pigment gone a bit wild. 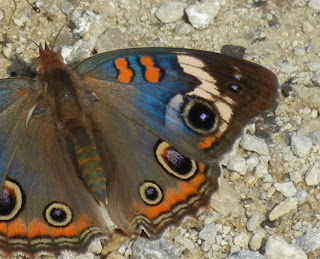 In a quick bit of research, I didn't find much about this phenomenon, but it does surface from time to time. CLICK HERE and you'll see a photo from Flickr that is quite similar to the individual that Brad found.

And then there are THESE PEOPLE. Employing the same mentality that causes the nursery trade to ruin perfectly good native plants, they are forcing the selection of blue in buckeyes. By isolating individuals that were naturally showing blue pigment on the forewings and crossing them with each other, they have apparently created a super race of wild looking buckeyes. Hopefully they are not releasing these genetically engineered specimens to the wild. If not, kudos to them for conducting a fascinating experiment that shows how rapidly morphological changes can occur in an animal population.

If you know more about "blue" common buckeyes or have seen one, please do share.
at September 12, 2011