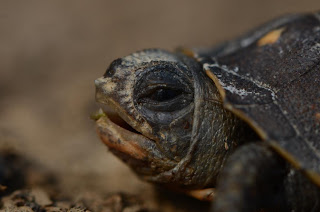 Hatchling eastern box turtle, Terrapene carolina. It was quite the unexpected treat to show up at a recent field trip rendezvous in southern Ohio, and be greeted by this little fellow. One of our fellow explorers on this fine day was John Howard, and he had found the turtlet beforehand and was good enough to hold it until we arrived. 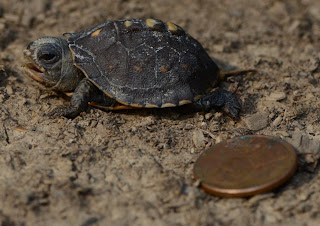 The penny provides scale. Hatchling box turtles are impossibly tiny, and as a consequence very vulnerable to all manner of predators. A typical clutch of eggs is perhaps a half-dozen, and probably most and sometimes all of the hatchlings fall prey to a predator or some sort of mishap. If the little girl - I think it is a female - in these photos survives her first year or two, her odds of living a very long life probably rise tremendously. It takes about seven years until female box turtles reach sexual maturity and begin producing eggs of their own.

I had never seen a box turtle this small before, and I imagine she is just a few weeks old. I've seen hundreds of the adults over the years; they can be reasonably easy to find. My hunch is that the hatchlings quickly go into hiding and stay in very dense cover and don't wander much. It's good that John found her, and not someone else. A ridiculous number of these charismatic turtles are taken from the wild each year and become "pets". Harvesting box turtles from the wild is a despicable act and isn't legal, either, at least in Ohio. Far too many are mowed down by vehicles each year as well. These reptiles aren't exactly speedy and are sitting ducks when they try to cross roadways. CLICK HERE for a post about that.

We liberated this little turtle in the exact same spot in which it was found. Box turtles keep a very small home range, and it's important not to take them far afield and release them in new turf. They're going to do best on their home ground, and if it is an adult that is relocated, that might be a turtle who has resided on the same football field-sized patch for decades before being uprooted. 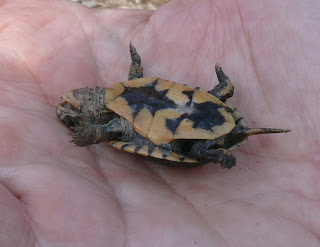 The baby turtle fits comfortably in the palm of a hand, with plenty of room to spare. The softer undershell is called a plastron, and it is already conspicuously ornamented with dark pigment. The upper shell of a turtle is the carapace. Eventually, as this turtle's plastron and carapace grow and enlarge to match its currently outsized head and legs, it'll be able to pull its extremities out of sight and seal itself up tight as a drum. At that point, the turtle will become far less vulnerable to predators. 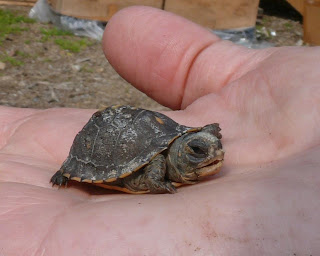 We hope that all goes well for this hatchling box turtle, and that it lives a long life. Young as it is, one can see the ancientness of the animal - maybe even more so in this little one than in the adults. If our turtle lives an untroubled life, and ultimately expires of natural causes, it will have outlasted most of the people who read this. Maybe every one of us. Box turtles certainly can live for five decades in the wild, and some undoubtedly last far longer than that. A centenarian is not out of the question.

This little box turtle certainly enriched our lives, and I hope she goes on to slowly crawl many miles and eat lots of mushrooms, bugs, and plants in her career. I certainly hope that she outlasts me!

...so, so, so cute! I've never seen such a tiny box turtle. Recently I've been studying Northern Maps and Spiny Softshells and have seen hatchlings of both, but never a baby box turtle!

Scary cute! In the mid-90s, I found an injured female box turtle up the road, in front of a site that was being developed. I took her to the vet, who taught me how to keep her wounds clean and give her a daily shot of antibiotics. She healed slowly. During that time, she laid several eggs, which she promptly ate. She couldn't be released on her home territory, since it covered in houses. She stayed with me for 13 years, till I realized she needed more freedom than I could give her. I took her to a rehabber who has large enclosures and access to protected open space. When I handed June over, Hilary remarked at her beauty and fine condition, then turned her over, looked at her all-black plastron and said, "Ooh, she's at least 80." I was floored.

Gorgeous post, Jim, hitting all the right points. Yolk sac is well absorbed and sealed over, so yes, at least 2 weeks old. It's hard to leave them in the huge old world, isn't it?

I read a university study about 30 years ago that said box turtles spent the first couple years of life beneath leaf litter in the woods. That seemed a likely place for them to find food, so it made sense that they would be there. Since that time I've found several hatchlings and dozens of egg clutches, but none have ever been in the woods. Most of the nests have been in the middle of barren prairie openings. That seems a most inhospitable place for a hatchling turtle. I think it's time for a new study.

They nest in open, disturbed areas because it's easier to dig and because of the heat from the sun. The babies seem to head for wet areas as much as the woods - another reason to protect wetlands. The babies are remarkably cryptic, and are hard to spot from even a few feet away.

What a fortuitous post. I was out driving the back roads of eastern North Carolina this past Saturday when I came upon a huge (a good 12 inches long) Eastern Box Turtle right smack dab in the middle of the road. I did a U-turn and parked in the middle of the road (there were no good shoulders) to pick him up and take him back into the woods. He certainly didn't want to be picked up and I scrambled after him while he did wheelies on the pavement (thank god the road was little traveled).

Thanks for the comments, info, and stories, everyone!

I read your column in the Columbus Dispatch and you wanted to know if anyone had spotted a box turtle in the past year.

Six years ago, a large box turtle was crossing the road in front of our house (Union County, Ohio). My son named him "Yoyo" as one of the markings on the shell looked like a yoyo. Due to concerns about the traffic, I placed the turtle on the other side of the road in the direction the turtle was headed. The area where the turtle was headed has been restored to a wetlands area with native Ohio grasses and wildflowers around the perimeter along with large stands of trees. Smart turtle to head that way.

Last week, while walking around that property, I spotted the turtle again--same distinctive yoyo marking. I'm glad to know that "YoYo" is doing well.

The turtle is very large nearing 12inches across with a high domed shell, about the size of a child's bicycle helmet. Very beautiful markings on the shell. It's amazing how old the turtle is.