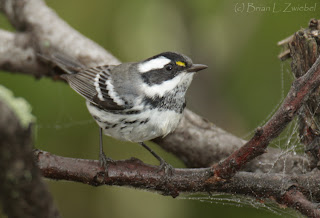 Photo: Brian Zwiebel
While down in the deep back country of Adams County last Saturday, I received a phone message from Brian Zwiebel, letting me know that he had found a major rarity for Ohio, a Black-throated Gray Warbler. I wasn't surprised that Brian found such a bird. He is a very sharp field man, and also one of the best bird photographers out there. Check out his work HERE. He was kind enough to share the stunning images in this post.

My problem, in regards to seeing the bird myself, was that Adams County is at the opposite end of the state from Magee Marsh Wildlife Area, where Brian made the find. About 230 miles apart, in fact. But word got out with extreme rapidity, and dozens of birders were able to make the scene and tick the bird for their state lists, and life lists in some cases. This is the 11th or 12th record of Black-throated Gray Warbler in Ohio, so seeing one is not something that one can count on. 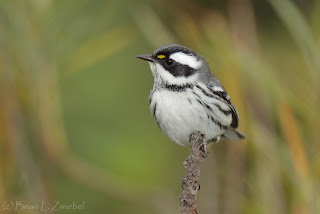 Photo: Brian Zwiebel
After spotting the bird, I doubt if Brian yelled " Ah Kah a qual!" But had he been an indian in the Chinook Nation in the 1800's, he might have made that strange exclamation. "Ah Kah a qual" is the Chinook name for the Black-throated Gray Warbler, and it's possible that explorer John Kirk Townsend heard the bird referred to as that in 1837, the year he collected the first Black-throated Gray to be documented, in Oregon.

Townsend, a native of Philadelphia, had signed on to an expedition to the Pacific Northwest at the invitation of botanist Thomas Nuttall (of woodpecker fame). This great adventure was the second trip to the far west organized by Nathaniel Wyeth, and Townsend proved himself to be a valuable addition to the party. In addition to the Black-throated Gray Warbler, he collected Chestnut-collared Longspur, Mountain Plover, Sage Thrasher, and Vaux's Swift - all new to science.

Oh, and of course, he found his namesake species, the Townsend's Warbler. Ironically enough, Ohio's only two records of the latter, in 1973 and 1983, also come from the county where Brian made this find, Lucas County. In fact, the 1973 Townsend's Warbler was found along Magee Marsh's legendary "Bird Trail", a mere stone's throw from the beach area where this latest western warbler appeared. 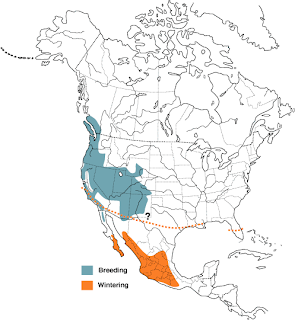 Map courtesy of Birds of North America
As can be seen from the distribution map of the Black-throated Gray Warbler, the Magee Marsh bird has come a long way to be with us. And luckily for birders, it was polite enough to hang around all day yesterday as well, which greatly upped the number of people who were able to see it. 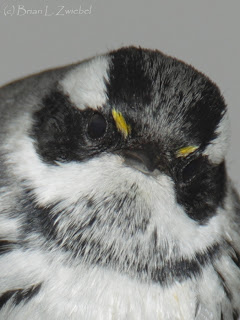 Black-throated Gray Warblers are well known for their tameness, and this bird was no exception. I would think the rare bird committee would find Brian Zwiebel's photos adequate for identification purposes.

I've been lucky enough to see this beautiful western warbler four times, most recently this last April in Arizona. Even in the west, whenever you see one, it is still a really good bird. They aren't seen as often as the range maps suggests they might be seen in Arizona and Utah.

Brian does it again! I’ve been speculating when the next one would appear in Ohio…sadly it happened while I was away. There’s always next year…

I've seen a few Black-throated Gray Warblers here in south Florida as well. The bird is a known vagrant it would seem . . . .

Incredible photos. Thanks for sharing this great find with your fellow birders. I hope one day to add this one to my list.

I just found on near Cleveland. not certain exactly what I should do with him. He was sitting on the sidewalk, maybe he is just tired from returning from the south. I tried to get him to move because there are a lot of people that walk that way, and he climbed right into a bottle, so I brought him with me :]

I live in Youngstown and have 1 in my backyard that has let me get within 2 inches. It will also play peekaboo with me