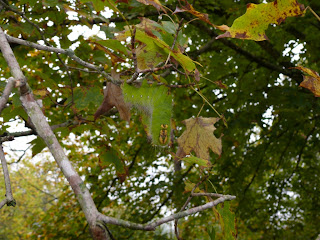 Last weekend, while in Adams County, a bit of Lepidopteran good fortune came my way. I walked out of the house that I was staying at, drawn by the chips of Blackpoll, Black-throated Green, and other warblers. Glancing up into a stately sugar maple, I spotted a truly spectacular caterpillar. 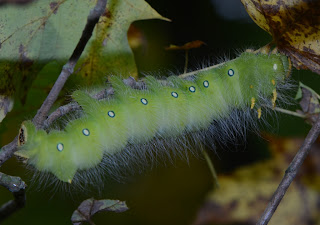 An enormous imperial moth caterpillar, Eacles imperialis, in its final instar! This thing was nearly the size of a small hotdog! Far too much for those warblers that I was chasing around to handle. Imperial cats are quite distinctive, as they are copiously beset with long silky white hairs, a row of white dots stitches down the sides, and the beast's head is armed with several small yellow horns. 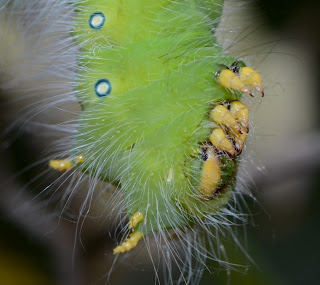 Caterpillars are little more than eating machines, and when one is the size of a full-grown imperial moth caterpillar, they can really suck in the foliage. The mouth on this bruiser is essentially a garbage disposal for leaves. It vaccuums them in at an impressive pace, and equally impressive are the giant frass pellets that regularly emerge from the other end. In fact, so large and prolific is the frass (caterpillar poop) of a jumbo such as this, that people sometimes find the caterpillar after noticing accumulations of frass pellets on the ground. Sort of like finding an owl, after spotting the owl pellets. 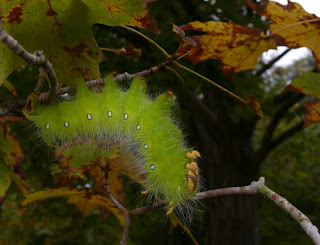 I am always interested in how caterpillars react to perceived threats, as some of them have remarkable ploys geared towards spooking off birds or other animals that might be out for a snack. When I gently prodded this imperial cat, it instantly and forcefully swung its head at my finger, as if it were going to impale me with those horns. Then, it adopted the posture in this photo - head and upper body arched down and out, as if this pose might render it invisible. 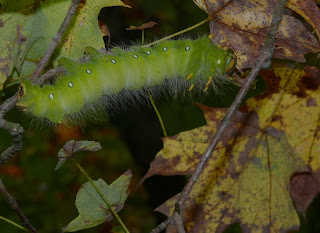 It didn't take long for the caterpillar to resume eating. My hunch is that I caught it on its last day out. Imperial moth caterpillars, after growing to maximum size and maturity, leave the tree and go to the ground. Once on terra firma, the caterpillar finds a suitable crevice, hole, or spot of soft soil and heads below ground to spend the winter as a pupa. It'll emerge as an adult sometime next summer.
Note the maple foliage in the background. As the days grow shorter, chlorophyll productions begins to shut down, and its attendant green coloration bleeds from the leaves. The underlying yellows, reds, and oranges are unmasked, and in maples, the leaves become yellowish, heavily dappled with maroon. Later they can briefly change to brilliant orange or crimson. 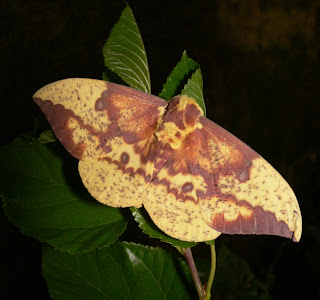 Here's an adult imperial moth that I photographed a few years ago. Note the remarkable similarity of the moth's coloration and patterning to that of the senescent maple foliage in the previous photo. It is as if the caterpillar, fueled by maple leaves, later becomes a leaf itself.

Ironically, for all of the eating that the caterpillar does over the weeks that it scavenges the trees, the moth eats nothing at all. Silk moths such as the imperial moth have no functional mouthparts, and live only to find a mate, copulate, and lay eggs.
at September 28, 2011

My husband just found that caterpillar this morning, on the ground, alive. I put it on a stick and then an open clear plastic glass so I could study it and find out what kind it was. It, in a very short period of time it got the glass tipped over and has escaped to freedom when I went inside to do some 'pillar sleuthing. It's no wonder the thing is HUGE! As big around as a man's thumb but not as long as you described. It was silly of me not to take a pic of it...hindsight...thanks for posting your pic of it, otherwise, I might not have found out what it was. An Imperial Moth Caterpillar. Beautiful and creepy with those yellow thorny teeth like things. Thanks, again.!

I found one. It's huge. I have it in a tank with peat moss. I'm afraid to keep it as I've read they're not easy ones to keep. I've had plenty of Luna caterpillars and those are easy. Not sure what I'll do with it