I'll get off the catepillar jag after this post, promise! But I've become smitten with everything about caterpillars: their appearance, behavior, interaction with plants and predators, and overall ecological importance. As a field of study, they are exquisite and provide endless intellectual stimulation.
And as a photographic subject, caterpillars are nearly without parallel in the insect world. They embody everything that I like about shooting nature. There is very much the element of the hunt involved, and that requires some fairly detailed knowledge of the quarry. How many caterpillars do you see when you are out hiking about? One must train their eye to find them. Also, objects that are long and cylindrical can be surprisingly hard to photograph well. Some thought must be given to the pose, and the photographer must make the effort to put themselves in odd positions to fire from interesting angles. 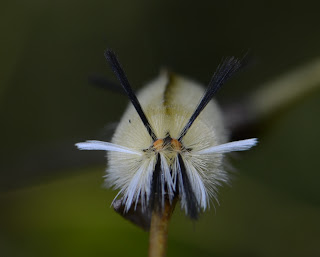 Looking straight on at a banded tussock moth caterpillar, Halysidota tessellaris. It resembles a fuzzy pipecleaner decked out with long, ornate lashes. And sporting a walrus mustache, to boot. 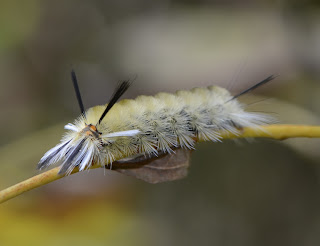 Here's the animal in its entirety. This one was feeding on the foliage of redbud, Cercis canadensis. Banded tussocks are very common caterpillars in the eastern U.S. 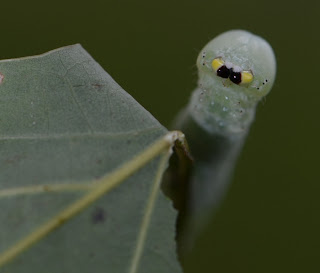 Looking like some bizarre and spooky alien from outer space, an irate white-dotted prominent caterpillar, Nadata gibbosa, lunges from the leaf of a post oak, Quercus stellata. I ticked off the animal by tapping it, and this posture is its last ditch effort to ward off the would-be predator. The caterpillar extends and bares its colorful mandibles to create the illusion of scary eyes, and thrashes and lunges. Were you a small animal such a bay-breasted warbler, you might well be inclined to leave the thing alone and search out less intimidating prey. 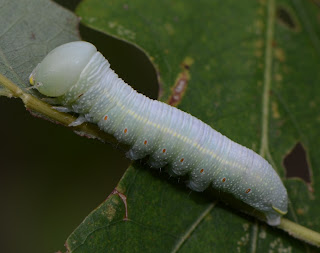 This is the same white-dotted prominent before I irritated it, peacefully snacking on oak leaves and not looking very dangerous.

The hidden world of caterpillars is indeed a strange and interesting place. I'll tip you now to an event that you won't want to miss. Next year's Midwest Native Plant Conference features Dr. David Wagner as the keynote speaker. Dave is author of the incredible guide, Caterpillars of Eastern North America and he's an incredible and engaging speaker. We'll also be conducting evening field trips to search out cool cats such as the ones in this post, and many more. CLICK HERE for conference details and block it off on next year's calendar.
at September 29, 2011

can you tell me what this guy is?

Your link doesn't work for me, flux, but I visited your blog and if its the jumbo by the spoon, its an imperial moth cat. They are wildly variable.y

Great pictures Jim! I hope you're getting your fill of caterpillars before they all disappear in a few months.