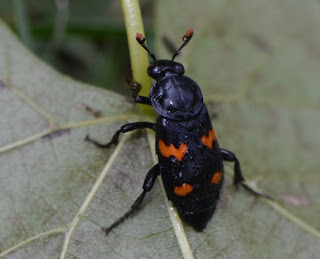 We got to see and photograph this beautiful beetle on a recent foray, and its story is by turns grotesque and intriguing. It is a roundneck sexton beetle, Nicrophorus orbicollis, and a dissection of both the common and scientific names is revealing.

A sexton is a church official tasked with oversight of the congregation's graveyard, and attendant to that role, the supervision of burials in the cemetery. That ought to give you an idea where this is going. The genus name, Nicrophorus, translates to: Nicro = death; phorus = bearing.

These large beetles are primary decomposers of animal carcasses; entomological vultures, if you will. Once a male beetle locates a mouse, chipmunk, vole or some other small, recently deceased mammal, it releases powerful pheromones that draw in a female. The carcass is, in effect, his engagement ring. Should she accept, the pair will get under the carcass and in an impressive display of strength, lift and cart the carcass to a suitable burial ground. They'll then dig a hole, roll the deceased in, and set about the all-important task of making more beetles. 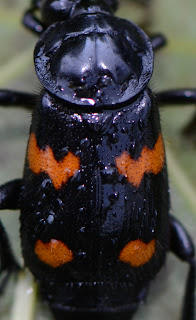 There are probably a dozen or so Nicrophorus beetles in these parts, but the large forest-dwelling roundneck sexton beetle is certainly among the best looking of their ranks.

Once the beetle pair has put the carcass six inches under, the female lays eggs in the surrounding soil. These soon hatch into small hungry beetle grubs and you can guess what their favorite snack is. The beetle parents remain with the remains, and the beetle grubs, for several reasons. There is a lot of competition for small animal corpses, and the adults work to defend their carcass from other ghoulish animals. They are also doting parents, and at least the female roundneck sexton beetle stays with her grubs until they pupate. By doing so, she can defend them against predators, and also feed them.

That's right, the adult beetles feed their grubs - an extraordinary measure of care for an insect. I, for one, would not really care for their food. The parents chew up and feed masticated bits of the corpse to their offspring. Well, I suppose someone has to live a life like this, and who knows, if you pull a kitten's tail or commit some other greivous act, you might find yourself back here someday as a roundneck sexton beetle. 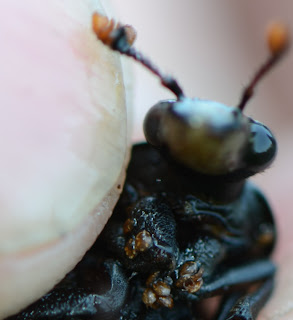 This beetle's story gets better. Enlarge this photo by clicking it - as can be done with all photos on this blog - and you can't help but to notice those tiny orangish dots that resemble little seeds. They're mites in the genus Poecilochirus, and you'll probably never see one of these beetles without its mite colony. In fact, the beetles act protective of the mites, seemingly herding and arranging them with their forelegs and endeavoring to site the little arachnids on their lower body where they might be the most protected.

Whatever the case, this is how it works. The beetle essentially serves as a six-legged taxicab, transporting its complement of mites to a carcass. Once all parties have arrived at the grisly scene, and burial is complete, the mites hop off and seek out fly eggs - their food of choice. The mites are happy; it's as if they've been picked up in a limo and delivered to a five star restaurant.

The beetles win, too. Fly grubs are major competition for highly coveted carrion, and the fewer flies that are in the picture and noshing on our sexton beetles' carcass, the better things are for them and their grubs. Hence, you'll probably never find one of these beautiful orange and black beetles without its mites.

Nature is surely a strange and fascinating realm.
at September 05, 2011

Great post Jim. Thanks for the info on this stranger-than-fiction beetle's life.