I'll get off the caterpillar spree in a moment, but before moving on to other subjects, I have to share this outrageous bag of goo. It's a long and complicated story, but through a very fortuitous series of events, I found myself up close and personal with one of our strangest caterpillars today. This species is also very seldom seen, at least in these parts. I know of one other person in Ohio has found the following animal, and many of my veteran cat-hunting friends who have been at it for years have yet to encounter one. 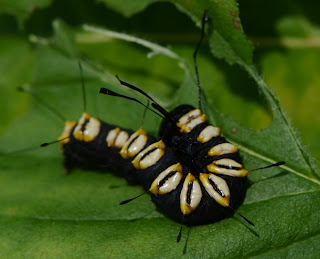 The marvelous paddle caterpillar, Acronicta funeralis. I couldn't believe my luck when it was produced, after having been found grazing on flowering dogwood, Cornus florida, at a site in central Ohio. Dr. Caterpillar himself, David Wagner - the author of Caterpillars of Eastern North America, says this in his paddle caterpillar account: "Unfortunately, this spectacular insect is rather scarce - I've never found its larva". 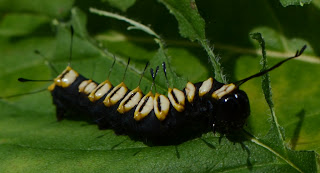 For whatever reason, the dorsal setae - hairs - are modified into stiff wiry extensions tipped with paddlelike caps that resemble tiny canoe paddles. The effect, especially in person, is quite remarkable.

As with many of our most spectacular caterpillars, the adult moth is rather a Plain Jane. It is called the funerary dagger moth, and it wouldn't warrant near the attention that its bizarre larva does.
at September 11, 2011

Fantastic! There are cool things no matter where one lives!

I found one at Dillon State Park on Thursday, Sept 15. My daughter (4) spotted it from 10 yards away and ran over to take a look. Even got a picture of it.

Awesome, Chris - you are one the fortunate few who has laid eyes on the amazing paddle cat!

I just found one in Olmsted Township on September 11, 2017! Took two photos of it. Want one?

Found one of these on my buttonbush in SW Virginia - very snazzy little creature. I planted a native plant hedgerow and really enjoy spotting and ID'ing caterpillars I have never seen before.