Requiring a bit of a respite from various desk-bound tasks this afternoon, I wandered out to our "weedy" little patch by the office. I snatched the Panasonic from the car's trunk first, just in case. It wasn't long before I heard the rapid guttural chirps of multiple Japanese burrowing crickets, Velarifictorus micado, out back of the building. Aha! thought I - I shall finally photo-document this ever-increasing invader. I first started hearing these Asian crickets about three years ago, and now hear them everywhere. In fact, one sings nightly from a crevice under my back porch steps. Getting a photo of one is a bit like playing whac-a-mole. I prod the partially concealed little singer to coax him from his burrow. He briefly pops up, I ready the camera, the cricket goes subterranean, I prod with twig again, Up, Down, me never fast enough with the camera's trigger.
Tiring of the cricket's game, I wandered into the goldenrods seeking easier fare. 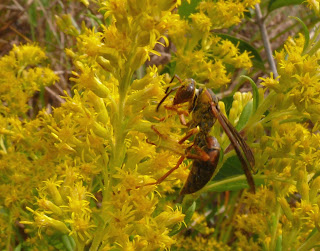 We have a nice patch of Canada goldenrod, Solidago canadensis, and it is now at peak bloom. Goldenrods are beacons for all manner of pollinating insects, and trust me, you'll never want for macro subjects when around these plants. There were plenty of Northern paper wasps, Polistes fuscatus, working the flowers and the one above is so thoroughly drenched in pollen that its field marks are nearly obscured.

Paper wasps pack a nasty punch. We can refer to the Schmidt Sting Pain Index to see just how painful the sting of this very common wasp is. If you've not heard of this rather bizarre excercise in scientific masochism, an entomologist named Justin Schmidt set out, a few decades ago, to quantify and compare the stings of various insects in the Hymenoptera. He did this by letting stinging insects sting him, of course. His magnum opus, first published in 1984, is the aforementioned Schmidt Sting Pain Index. Its scale goes from 1 to 4+, with a 1 being a very mild, only slightly painful sting. Our paper wasp weighs in at a 3, and its sting is described by Schmidt as follows:

"Caustic and burning. Distinctly bitter aftertaste. Like spilling a beaker of hydrochloric acid on a paper cut".

Ouch. And what a hand's-on scientist is Mr. Schmidt. 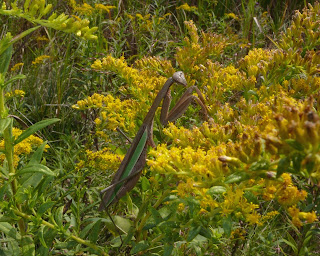 But there always seems to be a bigger, badder guy (female in this case) that comes along, and I noticed several large Chinese mantids, Tenodera sinensis, patiently stalking the flower patch. Given the number of nectar-seeking wasps that were about, I kept a watch on things. 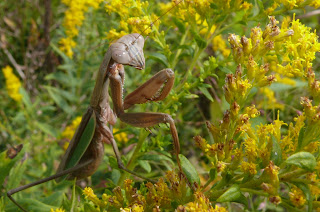 A mantid slowly and swayingly works into good position below a heavily visited panicle of goldenrod blossoms. These insects don't miss much, those large eyes instantly locking on to the slightest movement. 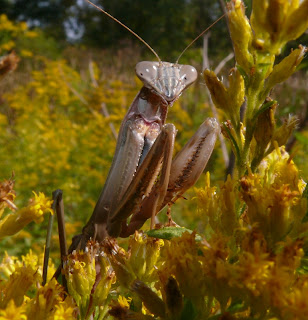 I moved in a bit too closely with my lens, and she gave me the evil eye. After all, I was horning in on her hunting! 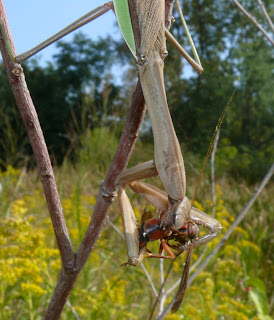 Bingo! She eventually lunged and seized a paper wasp, displaying utter disregard for the wasp's formidable 3 ranking on the Schmidt Sting Pain Index. Whether the wasp stung her I don't know, but I'm sure it tried. Given that the mantid instantly immobilized the potentially dangerous stinging insect with vise-like front legs, the wasp probably couldn't get at her. When I moved in close to make some photos, I could clearly hear the rather dry crunching as the mantid's powerful mandibles made mincemeat of #3 on the Schmidt Sting Pain Index.

And then my 20 minutes of documenting life in the goldenrod patch was up, and it was time to return to work.
at September 22, 2011

I'm glad you decided to stick around the goldenrod. Your pictures are good but the fact that you know what you are talking about makes it even better. I wrote about golden rod a couple days ago and I basically said, "how pretty."
nellie

Thanks for the comments, and Nellie, if I weren't so long-winded I probably could have essentially just said what you did in your post!

Wow. Not often someone can capture that kind of action. Amazing series of photos.

Sometimes the wasp wins when the mantid is small.

Jim: As always, you have a treat for us. The mantid piece is very well done.

A bit of natural history trivia...

Your mantid is a female. You can sex T. sinensis by counting abdominal segments. Males have 8, females 6. Also, she looks gravid. Mantids are about a week away from laying egg sacks.

What a great break - thanks for sharing those most fascinating pics.