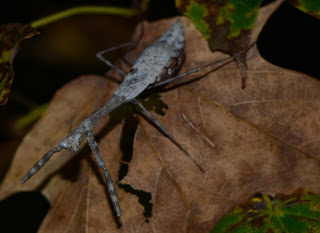 A female Carolina mantis, Stagmomantis carolina, stares inquisitively at your blogger. I had the good fortune to find several of these charming native mantids in southern Ohio last weekend.

A short while back, I wrote about the non-native Chinese Mantis, HERE. One tends to see far more of those than the much more diminutive native Carolina mantids. I have heard it postulated that the larger more aggressive introduced mantids will displace their native brethren. Could be; I certainly see few of the Carolinas and scads of the Chinese.

Carolinas are much smaller than the Chinese mantids; perhaps half that size. They're also a pleasing gray color, dusted and dappled with ashy blotching. 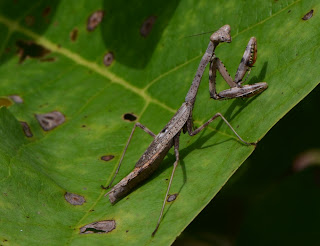 Here's a different female Carolina mantis, found the same day as the one in the first photo. It has been my observation that this species tends to be quite arboreal and I've found most of my specimens in the low hanging foliage of trees.

I believe the one above is gravid, judging by her swollen abdomen. Hopefully her mate made it out alive. Some estimates have it that up to one-quarter of males perish shortly after consummating their relationship with the female. The smaller, weaker male is set upon, and eaten by the cannabalistic female mantis. I don't like that, personally. I find it rather rude.
at September 30, 2011

Wouldn't want to be rude.

"The smaller, weaker male is set upon, and eaten by the cannabalistic female mantis. I don't like that, personally. I find it rather rude."

Thus providing a good, nourishing meal to increase the likelihood of healthy, viable eggs: the ultimate sacrifice for the next generation. ;o)

Called that one right, anonymous. The buckeyes won't be winning any titles this year.

It's a foolish strategy, this cannibalizing the males, wren. Everyone knows that males are more important :-)

Now that I had my fun with the Buckeyes, I'd like to make a more serious comment about cannabalism. By eating ones mate, the male can not bred with multiple partners (so sorry fellas). Each female will have her own unique mate, therefore increasing the species genetic diversity. Could this in turn speed along evolutionary changes that help the species adapt more quickly? I'm not a scientist, all this birds and bees stuff is just for fun, but that's my two cents worth.