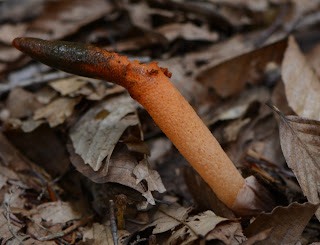 While on a recent excursion through some Hocking County forests, our crew stumbled onto one of the stranger fungi to be found: a stinkhorn. This particular beauty is sometimes known as the Devil's dipstick. More formally it is Mutinus elegans, a member of the family Phallaceae. A rather suggestive name, the latter, but even in this fading specimen it isn't hard to see how the family got its name.

Mutinus elegans has the distinction of being - probably - the first species of fungi named in the New World. A Brit, John Banister, described it in 1679 and the missionary Banister may have been suitably horrified at what this oddity seems to suggest. However, history does not record his reaction to the bizarre fungus. 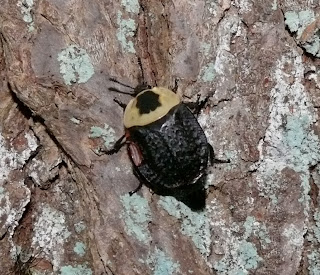 As we approached the stinkhorn, I noticed a scurrying movement in the shadows below. A bit of rustling around and we spooked out an American carrion beetle, Necrophila americana. The gelatinous spores of stinkhorns smell foul, like overripe meat, and the malodorous scent attracts insects that make their livelihood by exploiting dead animals. I'm sure if one were to prostrate themselves near some stinkhorns and quietly watch, there would be all manner of ghoulish visitors stopping by.
at September 13, 2011

We had quite a few Stinkhorns in a section of our flowerbeds last summer, but none this summer. Not that I'm complaining, as ounce for ounce, there aren't many things that sting worse than these little things.