Today dawned cool and crisp, with scattered clounds scudding across a breaking sky. Yes! No rain on the horizon, which means it's a good day to ride the bike to work. So out came the Ducati, its rich silky baritone amplified by a Termiglioni racing exhaust, no doubt delighting all who came within earshot of my commute. There is nothing quite like the deep bassano of an Italian L-twin motorcycle.
Anyway, riding the bike netted me a cool spider. It was the first time I'd had it out in nearly two weeks. When I take the car, I just hit the garage door opener as I near the dwelling and whisk into the bay, closing the door behind me. With the bike, I have to dismount in the driveway and go punch in the keypad code. This simple task put me on proximity to a wall I hadn't scanned in a while, and a very interesting little spider has taken up residence there. 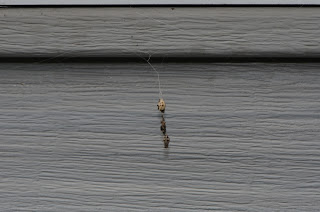 Glancing over at the wall, I noticed what looks to be a linear line of debris dangling from a silken thread. One could be excused for not giving this strand of a second glance, other than to perhaps brush it off with a broom. 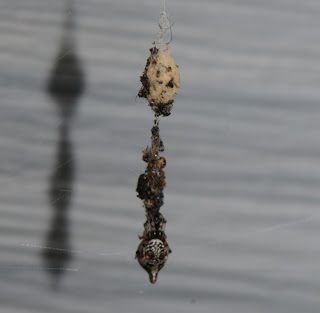 But I had become wise to the ways of the cryptic little trashline orbweaver spider, Cyclosa turbinata, some time ago and knew that the trash string was worth a closer look. She's in this photo, and nearly her entire life story is laid out before our eyes.

At the top is her egg case, and even it is carefully decorated with bits of debris. The core of the string is a dense tangle of various insect parts, plant bits, and who knows what else. This species is the Sanford & Son of the spider world. And there, at the bottom of the trashline, is our spider, looking all the world like part of the trash. 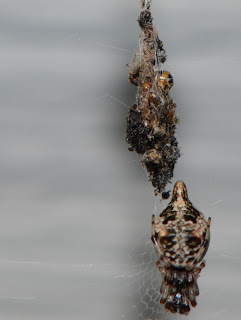 I gave her a gentle prod, and she stepped away from the trashline and we can now clearly see that a spider is involved with this oddest of webs. She is facing down, and if you click the photo to enlarge it, you'll see the faint outline of her major web. This is an orbweaving spider and as such, it creates a fairly sizeable circular web. The trashline is constructed vertically in the main web's center. But like the spider, the core web is a fine and delicate affair, its silken strands like gossamer and scarcely visible. It's the trashline that'll catch your eye. 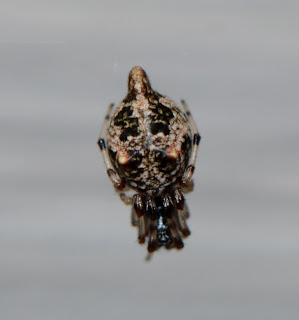 A bit more poking and she scampered out into the open, allowing me photos unfettered by trash. Once again, she is facing downward, and as is the typical posture, has her legs tucked in closely to the body. Look carefully and you can see what I assume are her fangs, shiny and metallic blue-green.

Why do trashline orbweavers build mini landfills? I don't know. Perhaps to better conceal themselves, both from would be predators and prey. And perhaps the string of trash lures flies or other scavengers, who then get caught up in the nearly invisible orb web.

This is a very common spider and if you keep a watch out you're certain to see one sooner than later.
at September 27, 2011