The joys of ragweed

There are about 1,850 species of native plants in the floristically diverse state of Ohio, and two of those natives are ragweeds (there is arguably a third, but it is too scarce to warrant inclusion). This pair, the common and giant ragweeds, probably rank near the top of the despicable plant list. The ragweeds have tiny, roughened windborne pollen, and it is this pollen blowing on the wind that is a major source of hay fever, the bane of many who venture outdoors.
But as with all native plants insofar as I have become aware, ragweeds have their value, if not to us. As these jolly green giants have been around for a long time, a whole platoon of insects has co-evolved to exploit the plants. Thus, ragweed stands spawn a fascinating ladder of biodiversity. I'll probably win no friends by going to bat for these botanical underdogs, but it is worthwhile to note the value of even the most despised organisms. 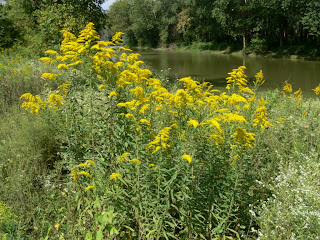 First, to dispel a myth. This is not ragweed, nor is it the source of hay fever. In a classic case of guilt by association, Canada goldenrod, Solidago canadensis, or other goldenrods are often accused of being the source of airborne irritants that trigger people's suffering. Not so, the showy, conspicuous wreaths of goldenrod flowers merely bloom along with those of inconspicuous ragweed flowers and often share the same general habitats. Thus, fingers are wrongly pointed at the handsome lemon-colored blooms. 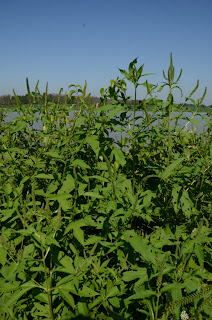 This is giant ragweed, Ambrosia trifida, in its full glory. The spikes of inconspicuous green flowers jut above the massive plants. Our other native is common ragweed, A. artemisiifolia, which is much smaller in stature. Both species are abundant and widespread, occurring in all 88 Ohio counties and far beyond. 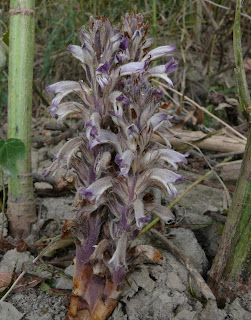 But life forms much more interesting than the ragweeds themselves have an interwined dependence with the coarse giant "weeds". This is a fascinating little parasitic plant known by the rather distasteful name of river broomrape, Orobanche riparia. It grows on the roots of ragweed, and was thought to be long gone from Ohio until Daniel Boone rediscovered it in a ragweed forest last year. That interesting story may be read HERE. 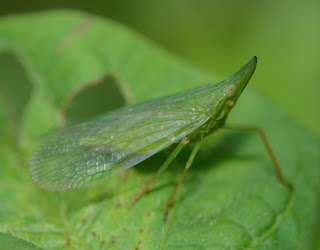 I am increasingly learning that, if you wish to find cool bugs, boldly venture into or at least around the edge of ragweed thickets. This is an example of what I believe must inarguably be termed a "cool bug". It is one of the species in the genus Rhynchomitra (I don't know which). It is certainly one of the more interesting of the bajillion species of hemipterans known as planthoppers. They make their living by sucking the sap from plants, and at least some are not so high and mighty that they shun ragweeds. 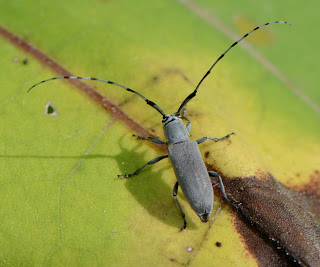 We were quite pleased to come across this magnificent longhorned beetle recently. Quick on the draw in this case, I managed one pretty good photo before the beetle vanished into the thicket. It is Dectes texanus (no common name). While the beetle looks large and impressive in this photo, it is actually less than a half-inch in length, discounting those marvelous antennae. Like some other amazing borers, this one spends much of its life cycle burrowing through the stems of plants, and Dectes texanus is especially fond of ragweeds. Perhaps it could be dubbed the "ragweed borer". 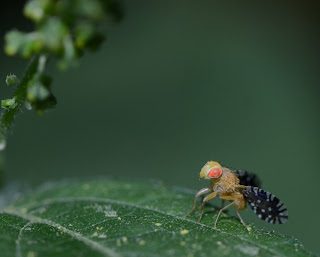 This gorgeous little fly may take the cake in the wacky world of ragweed-dependent bugs. It is the festive fruit fly (my innovation), Euaresta festiva. These tiny flies mostly go unnoticed, which is a shame. They'd be measured in the millimeters, and are so small as to be dismissed as inconsequential gnats or something equally uninteresting from afar. Be sure and click the photo for an expanded view of the critter.

Festive fruit flies are utterly dependent upon giant ragweed. They lay their eggs in the flower clusters - some blooms of the ragweed are in the upper lefthand corner of the photo - and the larvae ride out the winter within the seeds. Come late summer, and the astonishing adults are capering about the ragweed foliage, engaging in eccentric courtship displays. If there is one compelling reason to inspect giant ragweed stands, it is because of the possibility of seeing this marvelous fly.

The genus of ragweeds is Ambrosia, and that translates to "food of the gods". That may be overstating the case a bit, but festive fruit flies sure like the stuff.
at September 07, 2011

Ragweed can send me into fits of sneezing and runny noses but I had no idea it had so many important and specific relationships with so many insects!

I was heavily disappointed this year that the giant Ragweed stand where the Orobanche was found disappeared. Dan and Jim Decker checked on it earlier this year to find no Ragweed at all in the spot. Funny how things can change from year to year!

Since most people rely on common names when speaking about wildlife in everyday conversations (not scientists, of course, but most people), I'm always intrigued by species that don't have a common name. And, I love the idea that that means you're free to make one up yourself, as you did with the festive fruit fly!

Nice blog Jim but how dare you use "floristically" in a sentence! Lol.

I IDd a plant for some folks recently that was growing in the border around their garden pond. It was Giant Ragweed, so I told them they could leave it there if they wanted an 8-foot pollen bomb in their yard. Cool to see some of the life that uses them though.
Brian

When we were searching for the fabulous Amorpha Borer, I wasn't too bothered by the Giant Ragweed at first. It wasn't until one was held out of the way for me on the trail and I watched the pollen trickle off the plant into the air that I began to worry. I suffered from that contact for a couple of days!

Fascinating relationships that you have uncovered and shared with us here. Thanks for the info!

If I can pose a question in response to Andrew's note about the disappearance of the ragweed stand associated w/the broomrape: Did it just not bloom this year, or did it get mowed down? Has there been some kind of habitat change in the area? Just curious. Thanks.

Thanks for your comments, everybody. I'm glad that the post stimulated a bit more awareness of ragweeds, although I doubt it will spark a ragweed fan club.

Heather: the ragweed stand Andrew cited didn't get mowed - it isn't in an area where they cut things down. Giant ragweed is an annual, although given its robustness many people probably assume it is perennial. Annuals often boom and bust from locale to locale, depending on localized conditions.