Those of you who have followed this blog for a while may recall my fascination with a certain beetle that we call the "amorpha borer", Megacyllene decora. I first laid eyes on the bug three summers ago, and instantly became fascinated with the gorgeous insect. I was with some topnotch field people, and none of us knew what it was in spite of the animal's extremely showy and distinctive appearance.
In an effort to learn more about the beetle, we organized The Great Borer Expedition I, last summer. Success came our way, and we found two of the beetles. But only two, and that was after several hours of searching appropriate habitat. 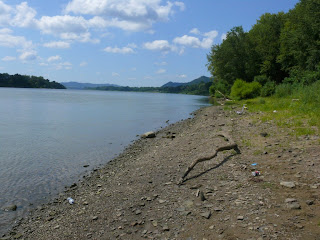 Flash forward to the banks of the Ohio River between Portsmouth and Cincinnati, and The Great Borer Expedition II, which took place last Sunday. Eight hardcore beetle enthusiasts gathered near what we now know to be Ground Zero for Ohio amorpha borer sightings, briefings were had, and out we set. 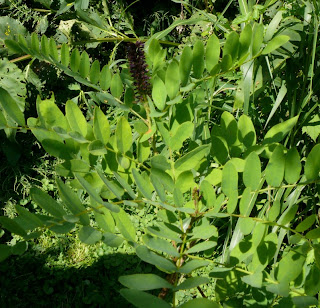 We believe that this beetle is rather rare in Ohio, and possibly even rarer than "rather rare". Other than Eric Eaton, who first identified our beetle for us after we couldn't find it in any books, I don't know of anyone outside of our expedition members who has actually seen one of these things in the wild, in Ohio. Eric lived in the Ohio River town of Cincinnati for eleven years, yet only saw one of these beetles in that time.

Anyway, Megacyllene decora is quite host-specific, apparently, using only plants in the genus Amorpha, which are part of the pea family (Fabaceae). In Ohio, that leaves only the plant in this photo, false indigo, Amorpha fruticosa. It reaches its NATIVE northern limits along the banks of the Ohio, although it is widely introduced and established northward. So, one must look for good-sized stands of this stuff on or near the Ohio's river banks, then start searching flowering patches of late-flowering thoroughwort, Eupatorium serotinum, and early goldenrod, Solidago juncea. The adult beetles come to these plants to seek nectar. 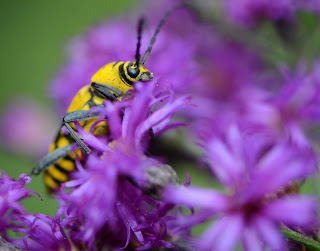 Well, I know you've been eagerly waiting to know if we were successful. The answer is a big fat YES! After poking about for a bit, John Howard excitedly called us over, and there she was. The group was elated, and with good cause. It was a life beetle for everyone, save seasoned borer veterans John and I, but this is much more than a new tick on a list. Here our quarry peeks coyly from a wreath of tall ironweed, Vernonia gigantea, flowers. I mean, just look at that thing! What's not to like? 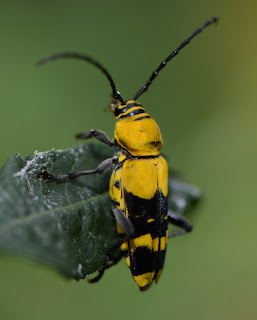 Despite close searches over a few hours, we could only locate this one beetle. We think that it is the females that visit the flowers for nectar, perhaps to gather an infusion of energy and nutrients to help them complete their reproductive cycle. Most of this borer's life is lived as a grub, boring through the tissue of its host plant. Good luck finding one at that stage. The adults, we think, only emerge briefly in late summer, so one's search window is rather narrow.

Even the fabled Bug Guide website has but eight photos of this beauty, which is circumstantial evidence of how rare the beetle may be. If it were widespread and frequently seen, I can about guarantee that there would be plenty of other photos. And of those eight photos, one is mine, and two are of pinned specimens. 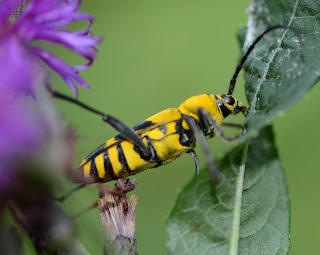 As the amazing amorpha borer clambered about, allowing the paparazzi some photo ops, I was able to make this photo showing the prominent tigerlike striping of the abdomen. This beetle is apparently yet another wasp mimic, and even resembles a big wasp or hornet when in flight. 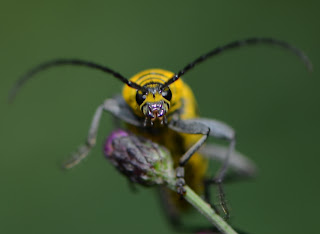 At one point, the beetle got all up in my grill, letting me see its formidable mandibles. We didn't handle it, but had we, whoever was doing the holding would have felt the power of the incredible amorpha borer's jaws as it would have certainly put the pinch on them. 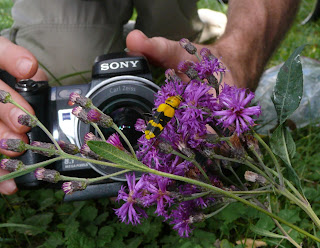 A great many photos were made of the bug, and there may be other images emerging on the Internet that are better than mine. Megacyllene decora is particularly appealing aesthetically in part, I think, because its dominant color is a very interesting shade of tangerine. I am hard pressed to cite another beast, bird or otherwise, that matches this hue. The black markings provide fascinating and artistic contrast, and the overall effect is quite striking. Couple the beetle's showiness with its apparent rarity and you've got an animal that captivates people. At least strange people such as myself and some of the company that I keep. 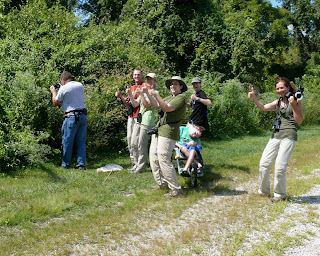 Expedition members display their elation at discovering this chitinous pot of gold at the end of the Amorpha rainbow. From left, we've got the always searching John Howard, David Hughes, Laura Stalder, Heather Aubke, Derek Hennen, John's son Andy who has had his fill with the beetle-hunting by this time, and Nina Harfmann.

I appreciate everyone who participated in this year's Borer Expedition. And of course, we didn't just see the borer - scads of other interesting life forms were noted and photographed. I could probably make 20 blog posts from trips like this and all of the stuff that we find.

If you know anything, anything at all, about Megacyllene decora the amorpha borer, especially based on firsthand field experience, please let me know.
at August 30, 2011

That's a lot of thumbs up (and a lot of pairs of khaki pants!) from some happy beetle seekers! That really was a lot of fun. I'm with you in that I have so many photos that I could blog about all those bugs for weeks! Here's a question though - in looking at the USDA range map for false indigo, it seems this plant also grows in Meigs Co. I'm guessing no one has ever looked down that way for this beetle? I just might have to scout out some Meigs Co. false indigo bushes next summer... For now, though, my account of the expedition is in the works.

You mean there is more to nature than birds?! Well, I'll be.

Thank you, Margarethe - we were indeed pleased!

Absolutely, Heather, Amorpha does grow up and down the length of the Ohio River and if you locate nice patches in Meigs County, hunt for this beetle. It must be other places.

But, I was in a riverbank site in Gallia County last year at prime time for the beetle, and it was full of the host plant and the nectar source plants. Couldn't find a single beetle, in spite of many hours of searching.

I still think we need to come up with a t-shirt. (As if snooping around with binoculars in the bushes doesn't arouse enough attention from onlookers!)
The most beautiful creature in the world deserves a space front and center as we go galavanting in search of borer beetles, and what better way to advertise how much fun getting out in nature can be!
It must be able to be worn with khaki, though.

Yes, a T-shirt would be fine, Nina, but I am thinking along the lines of a bright tangerine jumpsuit, circled with black striping in the manner of the beetle. The uniform would be completed with an orange beanie cap rigged with long antennae.

Where did you take the picture of the river bank at in the first image of this article?