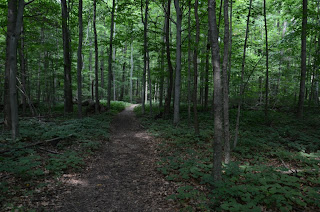 A rich beech-maple forest, one of the commoner woodland types in glaciated Ohio. Such places produce a bonanza of wildflowers in spring, but far fewer flowers of the forest floor during the dog days of August. But even in the muggy, buggy waning days of summer, such places do have their noteworthy charms.

I was recently invited to join a small foray into a north-central Ohio forest by Cheryl Harner, who had been keeping tabs on one of the most significant - at least to a botanist - plants that occurs amongst the beech and maple. 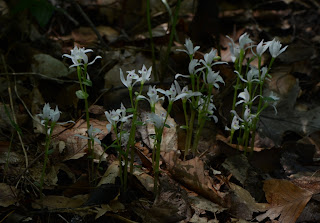 Few botanists spend much time exploring beech-maple forests in the heat of August, and that in part may explain the apparent rarity of the subject at hand. But if you do venture into such places, you may be rewarded by a small white drift of blooms barely rising out of the thatch of leaf litter. If you are near enough that the ghostly white flowers catch your eye among the sun-dappled shade of the forest's floor, you'll undoubtedly move in for closer inspection.

And discover one of our most mysterious orchids, the ornithologically named three-birds orchid, Triphora trianthophora. I had only seen this species one other time, and that population was in a remarkably similar setting albeit 100 or so miles away. 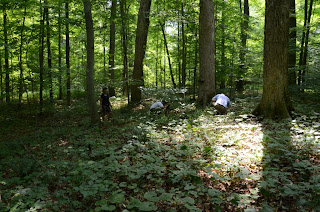 Cheryl, Andrew Gibson, and Warren Uxley get down low to better admire the diminutive orchids. There were perhaps 100 of the plants growing in a ring around that sugar maple, Acer saccharum. Where I had seen three-birds before, they were growing in much the same way but were encircling a beech, Fagus grandifolia. Those two tree species, which together form a classic forest composition, are the two species to key in on when seeking three-birds orchid.

In many of the populations of three-birds orchid that I have some knowledge about, it seems as if the plants typically grow in a "fairy ring"; they encircle the base of a large tree as these plants were. Conventional wisdom has it that Triphora seeds are probably wind dispersed, as they are tiny and dustlike. Each fruit capsule contains hundreds if not thousands of seeds. However, I wonder about this and think someone needs to do further study on the dispersal of this strange little orchid.

Oftentimes, when one sees a plant growing in profusion in a ring around a large tree, it is probably the result of their fruit being harvested by arboreal ants. The insects collect and haul the tasty seeds to the tree, and rather than lug the whole seed up the trunk, they bite off the nutrient rich seed base and leave the seed proper on the ground at the tree's base. Over time, a profusion of plants springs up around the mother tree. I wonder if that isn't what happens with this orchid, especially as dense forests are largely sheltered from strong winds and not the sort of places that one would predict that the evolution of wind-dispersed plant fruit would occur. 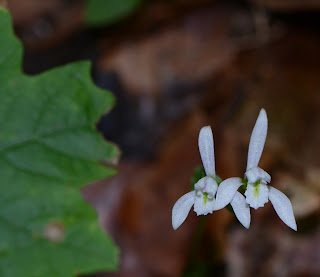 A pair of beautiful three-birds orchid flowers. Fittingly, they arise by the sapling of a sugar maple, one of their companion species. Three-birds have a largely synchronous bloom in a given population; all of the plants flower pretty much simultaneously and if you aren't present in the few day period that the flowers are out, you'll miss the show.

Some seasons, the three-birds never do appear above ground. They live a subterranean existence as tuberoids, intimately interwoven with certain types of fungus which are required to help fuel the orchid's growth. 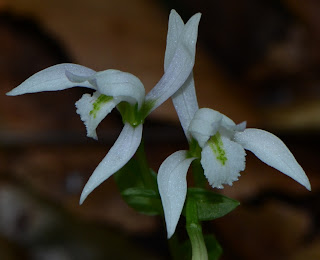 The genus name Triphora means "bearing three" in reference to the fact that each plant often produces a trio of blooms. Use a bit of imagination, and the freely spreading sepals might suggest the white wings of a flying bird.

It was truly a treat to once again see this mysterious little denizen of the late summer forest, and ponder its mysteries.
at August 09, 2011

Ha, what are the odds we both publish our respective posts mere minutes apart!

Loved your take on the exciting foray, as usual yours just does the job some simply yet with fantastic detail.

Regarding the arboreal ants theory, I agree there must be something to explain that ringed formation around a hardwood tree, especially if you've seen/heard it before. However, orchid seeds lack any covering or endosperm and I'm assuming that would prevent the ants from having much interest in an un-edible seed? Just a thought, I could be wrong. I completely agree more research needs to be done on this remarkable plant.

Great pictures, great post, and great thoughts on the dispersal! Such an exciting opportunity!

Thanks for the comments, guys. It may be that ants - or whatever - are lugging the entire fruit capsule to the tree, and losing seeds in the process of moving material. I just don't know, but there must be an explanation for the odd growth habit of this plant and I suspect animals are the culprit.

A mystery for someone to solve.

It's good to see that this population is still going strong. I just happened to stumble upon it, I think, in 2007 or 2008 when I spotted the large maple tree and went to measure it with a DBH tape. What a nice surprise that it was ringed with Three-Birds orchid!

Good work, Tom! I wasn't aware that it was you that discovered this site, but am deeply appreciative that you did!

Yep, Tom is the man!

Perhaps the fungus this orchid needs is only found on maples, beech, perhaps other species tree roots and only grows out to the distance of the roots. Maybe those seeds that don't land in a specific fungus area don't germinate. Just a thought.