We are about at the acme of caterpillar abundance and diversity. The winged creatures - butterflies and moths - that produce these wriggling bags of goo as ACT II of their four-pronged life cycle (egg, caterpillar, cocoon/chrysalis, moth/butterfly) are but the most obvious and often very ephemeral stages of an incredibly important group of animals. Caterpillars are by far the most numerous herbivores in the landscape, and without them there would be utter ecological collapse. Most of our songbirds would vanish, many other animals would disappear, plants would run amok, and many of the products that we depend upon in our daily lives would vanish as well.
Get rid of caterpillars, and it probably wouldn't be long before we'd go down the tubes as well.
In my wanderings of the last few weeks, I've had the good fortune to cross paths with some of our coolest cats. Ironically, in most cases the adult moths that most of these will become if all goes well are obscure little brown jobs that are seldom noticed. 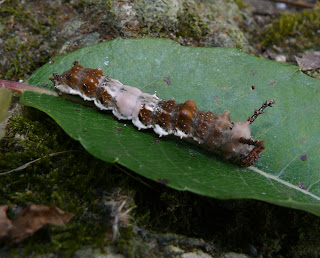 This is the caterpillar of the viceroy, Limenitis archippus, the sole butterfly amongst the examples in this post. These caterpillars feed on various species of willow, and are bird dropping mimics. And one must admit - they do look rather unappetizing! 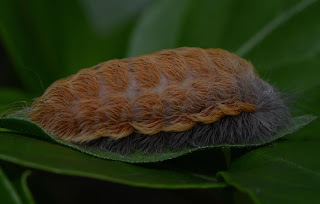 One of our more bizarre caterpillars is that of the black-waved flannel moth, Megalopyge crispata. It resembles a tiny turtle that has been covered with shag carpeting. Look, but don't touch - there are spines under that fur that can deliver a punishing sting. Black flannels eat a wide variety of plants, and we found this one on the non-native bristly smartweed, Polygonum cespitosum. 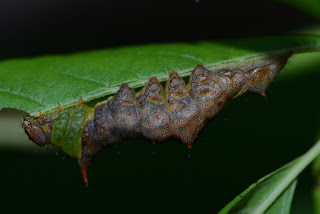 Checkered-fringe prominents, Schizura ipomoeaea, are outstanding leaf mimics. They eat their way into the leaf - box-elder, Acer negundo, in this case - and their body becomes one with the leaf. The brown coloration of the caterpillar even mimics dead leaf tissue - perfect for blending with late season leaves that are often dappled with necrotic tissue. 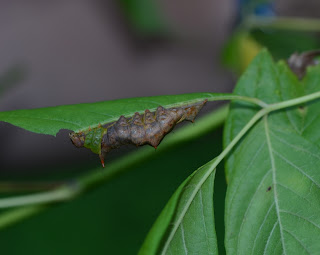 Seen from further afield, the caterpillar is scarcely noticeable and it takes a sharp eye to spot one. The goal is to mask oneself from the prying eyes of birds, which are a major group of caterpillar predators. 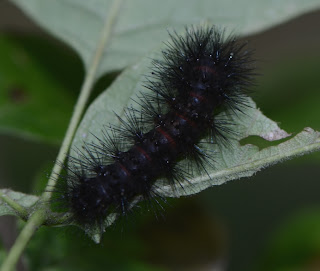 A study in bristly architecture, this is the caterpillar of the giant leopard moth, Hypercompe scribonia. These caterpillars, like many other moths, are polyphagous, meaning that they'll consume many different species of plants. Butterfly larvae are far more finicky a a rule, and in some cases butterfly species will only eat one species of plant. Unlike some other other moth caterpillars featured here, the adult giant leopard moth is a very cool and extremely distinctive animal. 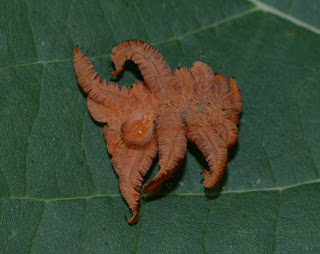 Some would cast their vote for the monkey slug, Phobetron pithecium, as our strangest caterpillar. This group of moths is primarily tropical, and it is thought that the caterpillar's appearance is meant to mimic a shed tarantula skin. Whatever it is doing by looking like this, the effect is overwhelmingly bizarre and most people would probably not even recognize it as a caterpillar. 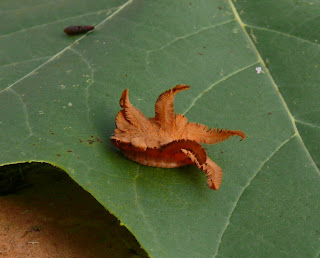 Seen from a lower perspective, the monkey slug appears even more outlandish, almost like a starfish. We found this one snacking on the foliage of a sycamore, Platanus occidentalis, but they'll consume many other species of trees. 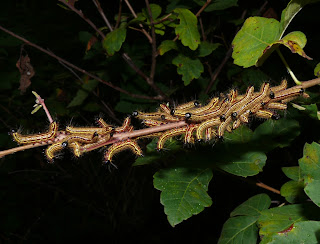 Grouped en masse and resembling a thickened twig are these spotted datana caterpillars, Datana perspicua. The individual caterpillar is quite striking, being prominently striped with bold bands of lemon and maroon. When agitated, the spotted datana often arches each end skyward, bending itself into a C shape. For a moth, this is a selective species, apparently only feeding on sumac. These were on a fragrant sumac, Rhus aromatica. 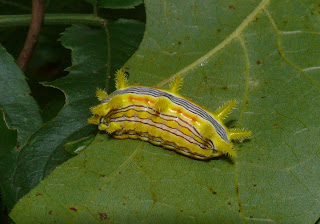 ﻿This one is high atop my list of favorites. It is a stinging rose caterpillar, Parasa indetermina. They are beyond outrageous in appearance and resemble a colorful sea slug. Those columns of spines aren't just for ornamentation - they pack one heck of a sting, supposedly. Stinging rose caterpillars can be diverse in coloration, and in some individuals the lemon-yellow is replaced by orange, red, or even pinkish tones. Like many moth species, they're garbage heads that eat many plants. We found this one on a sycamore. 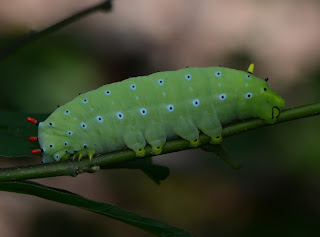 Finally, the jumbo of this crew and a truly spectacular beast, the promethea moth caterpillar, Callosamia promethea. This one was probably nearing pupation time and was huge. We could see it from some distance, and it had defoliated a good chunk of the spicebush, Lindera benzoin, that it was feeding on.

When you're out and about, carefully scan leaves and plants and sooner than later you'll find some very cool cats.
at August 24, 2011

the monkey slug is possibly the strangest creature I've seen in awhile...besides the snub nosed monkey.

Some great caterpillars, Jim - you hit most of my favorites. My favorite is the spicebush swallowtail, which you mentioned recently. I like the way they change their mimicry strategy from bird dropping to snake. I've got some pictures up at: http://www.marietta.edu/~biol/biomes/spicebush.htm

I've not seen viceroy cats before. Since they mimic Monarchs in their butterfly form, I assumed their caterpillar would be similar to the Monarch too. Quite the contrary! Thanks for opening my eyes to that.
How much do you know about the Giant Leopard Moth caterpillar? The reason I ask is that I came across something black and bristly like this the other day, but it was not a living caterpillar (although I'm sure it had been at one time). It was in pieces, and the pieces showed a hollowed out interior and the exterior (the part that the bristles were attached to) was very exoskeleton-like - quite rigid and "crunchy," if you will. Perhaps a molt from one instar to the next? What do you think?

I agree, flux - the monkey slug is straight out of bizarro world.

Thanks Dave, and that's a great site with excellent photos. At least caterpillars generally don't have to worry about dragonflies!

Viceroys are actually close relatives of the red-spotted purple, Heather. Look up a photo of the latter's caterpillar. Sounds like you found the husk of a caterpillar that had been victimized by a tachinid fly. Giant leopards are supposedly quite vulnerable to that.