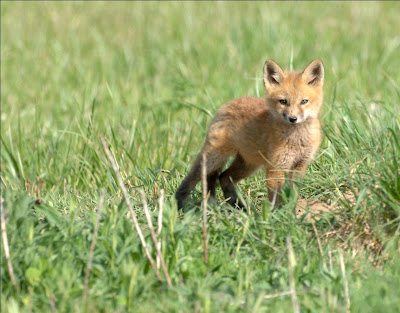 I recently wrote a piece about one of our handsomest mammals, the Red Fox, which appeared in last Sunday's Columbus Dispatch. At the end of the column, I asked readers to let me know of any foxes that they had seen within the limits of Interstate 270 - Columbus' outerbelt , which largely defines the city and its suburbs. And only sightings from within the last year, so as to get an up-to-date snapshot of their frequency in our city.

Well, I received 53 e-mails from area residents, and two things became obvious. One, Red Foxes are thriving within the city, and two, people really like these animals. Their larger brethren, the Coyote, tends to provoke a much more negative and often semi-fearful response; not so with the fox. People often spoke quite fondly of their encounters and made mention of the pleasure they got from having the opportunity to observe and admire these clever little animals.

Following is my Dispatch column in case you would like to read it, and after that is a map that I made that shows the approximate locations of the fox reports that I received.

“If the lion was advised by the fox, he would be cunning.” — William Blake

Sly, svelte and good- looking, the red fox is your neighbor — although you might not know it.

One of our most interesting mammals, foxes are adaptive and faring well, even in suburbia. These clever beasts recognize us as one of their few enemies, and that, coupled with their mostly nocturnal habits, keep the fox largely out of sight and mind.

A red fox is worth a gander, if chance permits.

It’s testimony to the fox’s good looks that especially pretty women are called “foxes.” Bright-eyed and bushy-tailed, the fox is endowed with a gorgeous coat of burnt orange. A white breast and dark legs give the impression that it wears black stockings and a bib. The incredible white-tipped tail can be well over half the animal’s length. It serves as a rudder on aerial leaps and helps balance the animal when in full gallop.

Foxes are canids, the same family that your dog belongs to. They do look doglike, albeit small: A 15-pound fox would be hefty, and they’re only 31/2 feet long. Were it not for the thick coat, a fox would be but a wisp of itself.

Foxes act catlike in spite of their canine lineage, as anyone who has watched them hunting mice knows. They’ll furtively stalk prey, then pounce in a stiff-legged leap, deftly seizing the victim.

Red foxes pair up in winter to breed. Their dens are usually modified woodchuck burrows, but they’ll use rock piles, hollow logs or other suitable crevices. The babies — kits — are born in early spring. Watching an active den is a treat. The kits, which usually number a half-dozen or so, cavort and tussle near the entrance like kittens. The parents bring wounded chipmunks and other small prey so that the youngsters can practice the craft of killing.

Foxes aren’t strict meat-eaters, though. They’re omnivorous: They eat a variety of foods. During summer and fall, berries and other vegetable matter become dietary staples.

I once drove by a rural farmhouse with scads of chickens in the yard when something caught my eye. It was a red fox, frozen stiff as a statue, paw in the air and poultry on its mind, looking straight at me. Busted, the fox scampered off.

The clever creatures aren’t usually chicken thieves, though, and are far more beneficial than detrimental. They’re inveterate mousers and partial to the rabbits that plunder your garden. Fluffy should be safe, too: Cats are usually too much for a fox to handle.

In 1962, 70 of Ohio’s 88 counties offered bounties on foxes. People didn’t understand the importance of predators, and foxes were vilified as killers of “good” animals. In 1975, the archaic bounty practice was banned.

Today, red foxes are common in every Ohio county and plentiful in urban areas such as Columbus.

Naturalist Jim McCormac writes a column for The Dispatch the first and third Sundays of the month. He also writes about nature at jim.mccormac.blogspot.com.

Further afield
• Let me know whether you’ve seen any red foxes during the past year within the bounds of I-270. Drop an e-mail to ambrosia@columbus.rr.com.

• One of spring’s great natural phenomenons is the running of the salamanders. Naturalist Chrissy Pheifer will present a program titled “Salamanders: The Mystery and Journey” at the Columbus Natural History Society meeting at 7:30 p.m. March 14 in the Museum of Biological Diversity, 1315 Kinnear Rd. 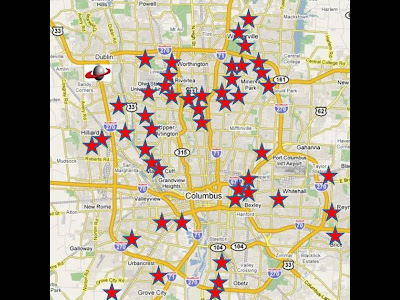 Locations of red fox sightings in Columbus, Ohio, over the past year. A few of these foxes are local celebrities and were reported by multiple observers. And I'm sure there are plenty of others going unreported. Thanks to all who shared their sightings!

I love this project! I would quibble with the statement that foxes are mostly nocturnal, though. We “fox-chasers” (you can’t call it fox hunting as killing is not the goal in any way, shape or form) see many fox after eight in the morning, and then there is the notorious “four o’clock fox,” for which we change our casting time for later in the day to specifically give chase. It is my observation that the time of day in which a fox will leave their dens to forage is dependent on the season. When it’s hot, they’re out mostly after dark. Cool to colder days, I’ve seen them afield after ten AM and as late as five. Vixens bring their kits out in the sun for late afternoon to evening clown-abouts, as well as to warm-up after a cool night. I would posit that their hunting patterns follow that of their prey. So, being a big fan of mice, “Reynard” would be afoot when “Mickey” is out-of-doors. Unless, of course, the pickings are slim- that does tend to change the game.
I have also noticed a few other things about lovely Reynard the Red: when a fox is afield, one can usually observe a bird of prey overhead. This is fairly typical in a low- to middle-cut field, where I think the fox is causing the mice to scram and the hawk is taking advantage of the mice that get too far ahead. This is not cut-in-stone, but I’ve seen it enough to scan fields when I see a hawk winging overhead. Additionally, I think Reynard prefers to keep his beautiful, red coat dry. A coyote, on the other hand, seems to be the Jeep of this predator group and will go out in pretty much any kind of weather and do well in it.
The last two seasons here in Cincinnati have been a bit “blank” in the fox department and there was concern about the coyote moving in and taking over. But this winter has been better, with an viewings of red fox and an increasing mouse population (a mixed blessing in a barn full of horses, but that’s what black snakes are for, right?) and we hope the fox will have better litters with better groceries available. But with the increase in population brings an increase in the likelihood of mange, which will eventually put our population out of whack again. It is a wild and wonderful wait-and-see, no?
Good luck with your project and keep us posted!

Thanks for some interesting comments, Clara. I will stand by my statement: "their mostly nocturnal habits" as it applies to red foxes. The vast majority that I've seen have been at night, and the literature on these mammals backs up their preference for hunting under cover of nightfall, or in the twilight hours just before dawn and at dusk.

It may be that you and your compadres are "chasing" them from cover during the day, and that's why you see so many. I have seen people engaged in this practice of "fox-hunting" combing the fields on horses, and often with dogs. Small wonder Reynard bounds from his lair and across the meadow :-)

Anyway, thanks for the comments.

I missed your dispatch article but back in early February I saw one walking across the ice just north of the Hayden Run/Bethel Road bridge over Griggs Reservoir.

Just saw one near Feder Rd and Hilliard-Rome Rd. Just outside 270 .