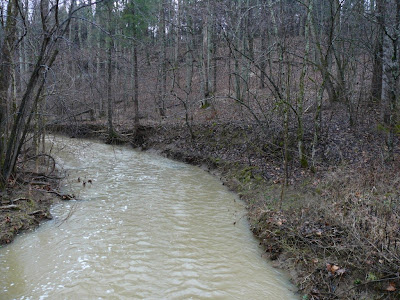 A slightly swollen and roiled creek flows by what, at first blush, appears an ordinary wooded slope. It's not - heavy sheets of dolomitic limestone lay just under the surface. The presence of this rock creates just the sort of thin limey soil favored by one of our true harbingers of spring. Those of you that live up here in the Midwest's northern latitudes, take heart. Following is the most surefire botanical indicator of Spring that I've yet seen.

On my way back from yesterday's Amish Bird Symposium in southernmost Ohio's Adams County, I stopped off to have a look at our largest population of Snow Trillium, Trillium nivale. Don't know that I would have, ordinarily, but John Howard tipped me that he'd seen a few plants in bloom there the preceding Wednesday. 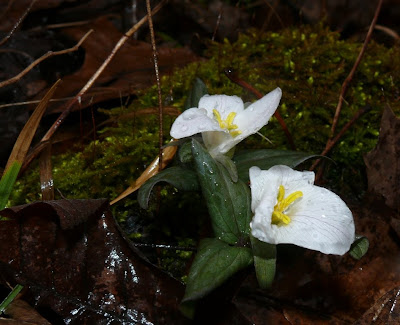 Upon arrival at the rocky slope, it took only seconds to spot tiny white flecks of white glimmering in the dim rainy woodland. Yes indeed, the trillium were bursting forth in profusion - the earliest I have ever seen them, at least at this site. I've photographed them at this spot in at least two other years, and on both occasions the population was near peak bloom about one month later than this date. Snow Trillium, from my experience, are rather fickle as to when they flower, seemingly not so tied into a specific photoperiod - length of day - as our other plants. 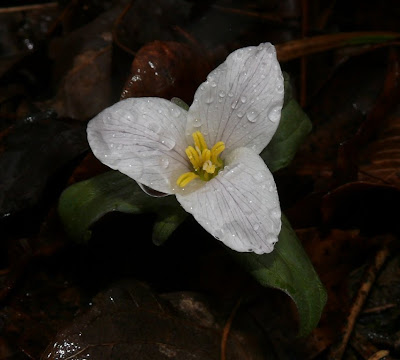 This is the smallest of Ohio's eight trillium species, and easily the earliest of the lot to bloom. Its specific epithet - nivale - means "snowy", and it isn't uncommon to see a patch that gets carpeted with a late snow, the flowers poking forth from a snowy blanket.
Snow Trillium is one of nearly 100 species of vascular plants that was discovered and described to science from Ohio. The type locality - the place of the original discovery and collection - was along the banks of the Scioto River near Columbus, in 1834. John Riddell was the collector and his type specimen still exists, safeguarded in the New York Botanical Garden. If you want to see it, click HERE.
Every week will bring new plants pushing forth and spreading their petals. March is a welcome time of year after these cold and snowy past few months.
at March 06, 2011

That's so cool! I have never seen these, I would love to come upon some this season! Nice photos : ) I will have to figure out where they can be found near me, I'm sure they probably bloom a bit later up in the Northern counties...

Thank you for sharing this sign of spring and its interesting history.