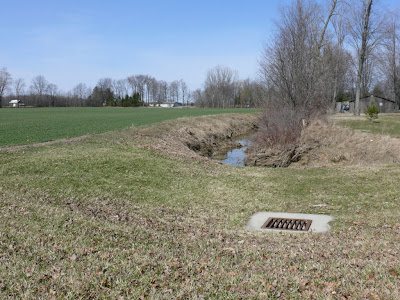 Humble beginnings. This is the origin of the mighty Olentangy River, a stream well known to central Ohioans. Water washing off a field in southeastern Crawford County, some 90 river miles north of its mouth, form the Olentangy. This field runoff is shunted into a culvert, and then into that ditch in the background. 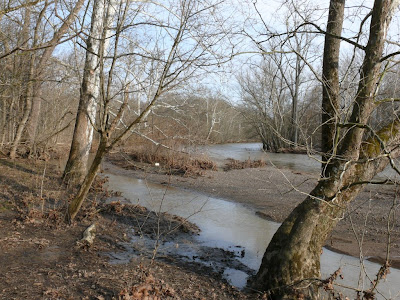 The Olentangy River at Highbanks Metropark, not far north of Columbus. By this point, the stream has become much larger, and far wilder. Many interesting creatures live in and along the river over its 97-mile course, and its corridors provide some of the most noteworthy scenery in central Ohio.
I am giving a program on the Olentangy on Tuesday evening, March 29th at 7 pm at the Friends of the Lower Olentangy Watershed (FLOW) meeting. Location: Worthington Library, Northwest Branch, 2280 Hard Road. It's free and all are welcome. FLOW is a good group to become involved with if you are interested in the Olentangy River.

Olentangy is a funny word, but Columbus residents know it well as our premier stream.

It's a Delaware Indian name meaning "river of the red face paint." Good thing they changed it from the previous Delaware name: keenhongsheconsepung, which means "stone for your knife stream."

I grew up near the banks of the 97-mile-long Olentangy River, in Worthington, and it had a profound effect on my life.

As a lad, I frequently sneaked off to the river with my best buddy to look for turtles, fish, birds, whatever. We would grab the biggest floatable log we could move, set it adrift and hop on. Ensconced on our primitive vessel, we navigated what, to our preteen minds, was an uncharted wilderness full of exciting creatures.

Jeff and I would be dumbstruck by massive great blue herons - to us, pterodactyls croaking their displeasure at our intrusion.

We would marvel at the great springtime runs of redhorse suckers, with dozens of the big fish clogging the riffles.

Alien-looking softshell turtles were sought, captured and imprisoned in streamside enclosures of rock. We quickly learned that softshells are expert tunnelers and could dig their way to freedom.

Once, while I was wading in a clear pool, a Northern watersnake darted from a stone bridge abutment and killed a sunfish a foot from my thigh. That fired my 11-year-old imagination - as did the jumbo crayfish with the powerful pinch and the occasional mink with its silky, sinuous gait.

The Olentangy River is a linear ribbon of biodiversity - and a natural treasure for Columbus.

It hosts dozens of fish species, including threatened bluebreast darters. A half-dozen rare mussels burrow into its substrate, filtering food particles from the water. The white trunks of giant sycamores delineate its course, providing sanctuaries for barred owls and yellow-throated warblers.

Cliff swallows build globular mud adobes under the Olentangy's bridges. This is the same swallow that made San Juan Capistrano, Calif., famous. It is but one of dozens of species of birds that breed along the Olentangy.

In the early 1830s, botanist John Riddell noted a gorgeous purple-flowered aster along the river near Worthington. He gave his discovery - the sky blue aster - the fitting name of Aster oolentangiensis. The stunning plant is a fitting tribute to one of Ohio's most remarkable streams.

This is a beautiful write-up about the Olentangy. That's awesome that you called GBHs Pteradactyls because that's what I call them too, they are so prehistoric! I love the anecdotes of exploring that beautiful place as a kid. That was me and buddy Chia, I can totally relate. Such great times, but, like you I'm gonna continue exploring Ohio my whole life! I feel similarly about the Grand River. I grew up in Mentor and my buddy in Chardon. We used to explore Big Creek and the Grand : ) Such a beautiful river. I too hope that this places are just as healthy for our kids.