Today is "Buzzard Day" in Hinckley, Ohio. This now legendary rite of spring features the Turkey Vulture, and its return to northeastern Ohio. Their return is symbolic of winter's demise and warmer days to come for the snow-encrusted igloo-dwellers who live up there.

Ringmaster Bob Hinkle, chief organizer of the affair, mounts his perch in the pre-dawn hours, often surrounded by dozens of buzzard enthusiasts. They eagerly await the first vulture, and its identity must be confirmed with an official confirmation from Mr. Hinkle. They never fail to spot one of these macabre masters of the air.

Of course, various ignorami have the temerity to report vultures in the vicinity of Hinckley prior to March 15 and Buzzard Day. These bat-blind fools must be looking through fogged up binoculars and using hopelessly smudged and water-stained Sibleys as a reference. Bob Hinkle's research has clearly shown that pre-Buzzard Day "vultures" are Creagles - hybrids between crows and eagles. They do look a bit like buzzards from afar, to those of unsound mind and 20/400 vision.

Anyway, I was at the other end of the state last Saturday, where sighting of pre Ides of March vultures can be legitimate. And I saw some. Reality Check: some could construe the following photos as somewhat gruesome. 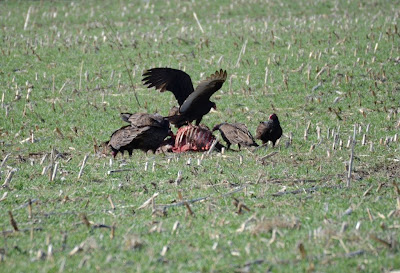 A platoon of Turkey Vultures frolicks in a Pike County field. They are making a meal of a road-killed white-tailed deer. 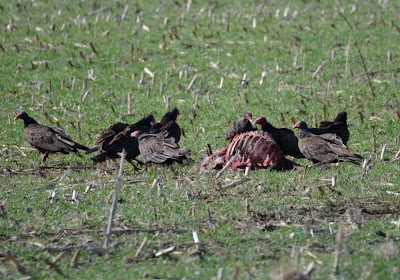 As a young lad, I would occasionally lie on my back and watch the vultures languidly floating high on thermals. Their flight was so effortless and graceful that it made up for the birds' awkwardness when grounded. What a thing, thought I, to be able to fly like that. 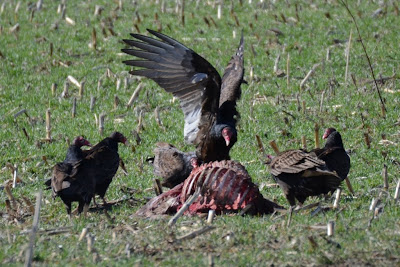 And so it would be - if you didn't have to partake of their dietary fare. Vultures dive into unspeakably nasty roadkill and such that could gag a normal person at 50 yards. I don't think the ability to soar like an eagle - or creagle - would be adequate compensation.
at March 15, 2011

This was a hoot!
Yep, I witnessed many Creagles in the Toledo area last week.