I respect and admire mail carriers. Their job is real work - the delivery of all kinds of mail, in all kinds of conditions, year-round. And I am quite glad to say, the U.S. Postal Service has never lost one of my letters or packages, and I send a lot of stuff out. I find that rather remarkable.

Anyway, in the course of executing their duties, mail carriers encounter lots of stuff. Dogs, probably the occasional irate person, ice, floods, snow, you name it. I'm sure that, over the course of a career, a carrier could probably write a book about their experiences.

But there's always the chance for something new and completely unexpected, as Washington County carrier Tammy Taylor discovered recently. 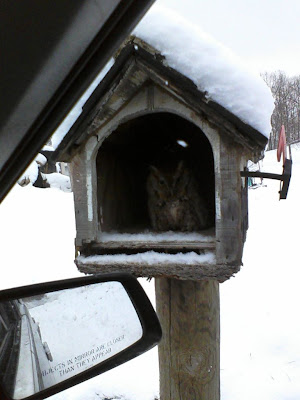 When Tammy wheeled up to one of her customer's boxes and reached out to stuff in the mail, this little fellow was glaring fiecely from within. An Eastern Screech-Owl! Screech-owls are cavity-dwellers, both for nesting and often for roosting. They are somewhat notorious for turning up in odd places. 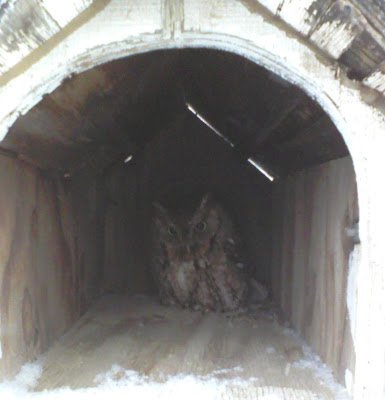 Eastern Screech-Owls come in two color forms, correctly termed "morphs": red, and gray. Sometimes there is an intermediate browinsh morph as well. Red morphs tend to become more numerous southward and are the dominant morph encountered in southern Ohio, and that's what this bird is.

I really want to thank Tammy Taylor for photographing the owl, and Kathy Lucas for sending them my way. No word on what Tammy did with the mail. Who knows, maybe this is a "mail owl" and took the material on its next leg. That's what owls were used for in Harry Potter (yes, I read them all).

The U.S. Postal Service may have to restate its position: "Neither snow, nor rain, nor heat, nor gloom of night nor savage little owls stays these courageous couriers from the swift completion of their appointed rounds".*

*The U.S. Postal Service actually has no official motto. The one above is often attributed to the Service, but apparently originated some 2,500 years ago with Herodotus, a Greek historian. It was engraved prominently on one of their buildings back in the late 1800's and has been associated with th Postal Service ever since.
at March 12, 2011

I put up an Owl box...
I carefully measured the height on the tree.
I made sure it is facing the proper direction.
I've even had Screech Owls in our yard sitting on our feeders!
No owls nesting.
Yep, I have squirrels in the owl box.
Still.

I put the mail in the box with the owl and went on to the next box!