If you are looking for a good time on the cheap, come on up to the little town of Shreve in Wayne County, Ohio on Saturday, March 26th. That's the date of the now legendary Shreve Migration Sensation. For the admission price of $10.00, you'll get more bang for the buck than any other event. 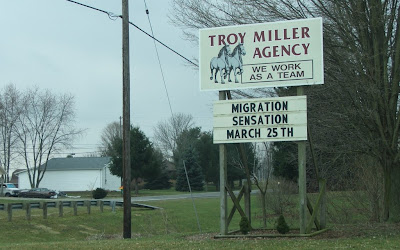 Shreve is a beautiful community nestled in the gently rolling hills buffering the Killbuck Valley. Good thing we aren't holding this event about 11,000 years ago, when a ferocious torrent of water burst through the retreating Wisconsin glacier and carved out the valley and shaped those rolling hills. We would have been flooded out, big time. 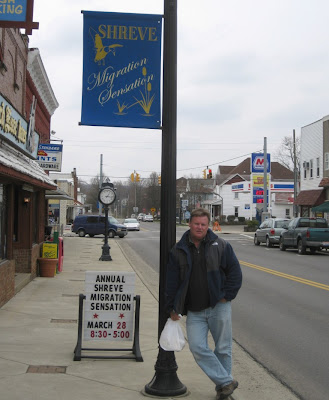 Your narrator leans against a post in downtown Shreve. Note the sign, and the flags flying from the streetlights. This town of about 1,600 people really gets into the act; it's impossible not to when your town swells by about 1,000 new people for a day. This is Ohio's largest one-day birding festival, and is probably one of the largest such single day events anywhere. 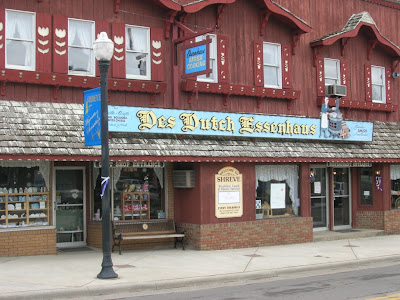 Keen observer that you no doubt are, you may have noticed that I was holding a bag in the shot above. Yes, indeedy-do, it was a bag full of Amish-made cookies from this restaurant, the Des Dutch Essenhaus. It goes without saying that the cookies are magnificent, or so say all of the people that I give them away to. Yeah, right, whatever - I can vouch for their tastiness and it's worth a trip to Shreve just to bag some. 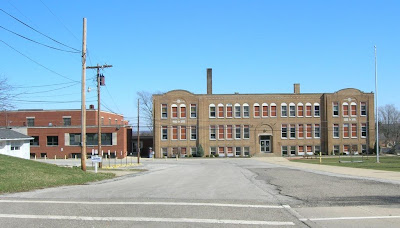 The hub of Migration Sensation activities is this bulding, the local school. That's the original structure on the right; a newer addition on the left. The Sensation always features a half-dozen presentations on various topics, and the programs take place in the gymnasium of the older building.
Believe it or not, Shreve is my mother's hometown. She attended this school. And when I give my program on Ruby-throated Hummingbirds there this year, it'll about the sixth or seventh year in a row that I've given talks in this building. I find this very cool, nearly surreal, especially since my mom - and dad - have sat in the audience and heard their son speak, such as last year. I would bet you $58.00 bucks that my mom, when but a tiny tot racing about in that gymnasium some years back, would never have envisioned that one day she would have a boy who would grow up to like birds and would be speaking about them as an adult in the very gymnasium that she frisked about as an elementary school child. And she would be there to listen. 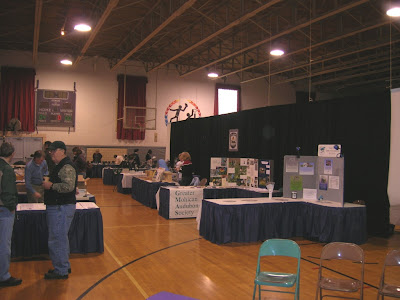 The newer wing of the school also sports a gymnasium, and it is packed to the gills with vendors, exhibitors and various displays. Come on up, and I'll guarantee that you'll see some of your friends in there. And likely meet some new ones. 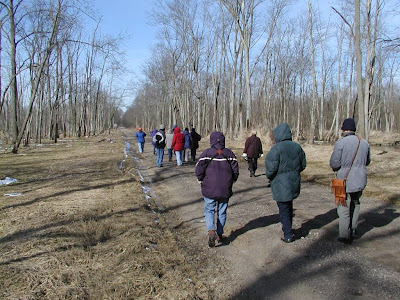 A troop of birders marches into the swamps of the Killbuck Wildlife Area. A month or so later the monotone swee-swee-swee's of Prothonotary Warblers will fill these woods, but for now we'll have to make due with the grating churrs of Red-headed Woodpeckers. And plenty of other birds, including all of the other regularly occurring Ohio woodpeckers. 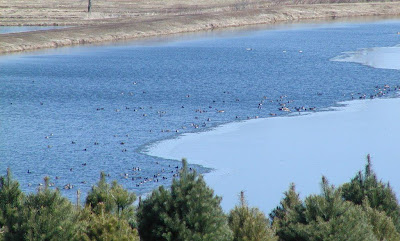 One of the ponds that dot the local landscape. I took this shot at a past Sensation, and this water body, small that it is, had at least the following floating about: Mallard, American Black Duck, American Wigeon, Ring-necked Duck, Redhead, Canvasback, Lesser Scaup, Ruddy Duck, and Common Merganser.
Waterfowl are the centerpiece of Migration Sensation field experiences. The largest wetland complexes in the state away from Lake Erie are found in the broad Killbuck Valley, and the sheer numbers and diversity of fowl is typically staggering. Expert birders are stationed at all of the hotspots to help, and you'll have the company of numerous other birders of all stripes. This is a great chance to learn more about birds from lots of friendly and helpful people. 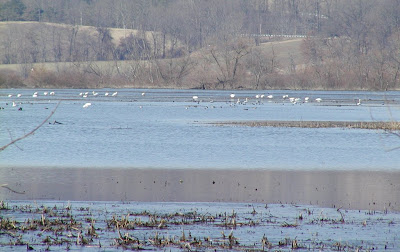 A shot across the wetland-filled Kiillbuck Valley, just a stone's throw north of Shreve. Those are Tundra Swans, the big ivory lumps. Tons of other stuff, too, and those toughest of swallows, the Tree Swallow, should be back in numbers by the time of the Sensation. Sometimes a noteworthy rarity pops up, such as Eurasian Wigeon or White-winged Scoter, sending ripples of excitement through the crowd and causing a migration of birders to the hotspot. 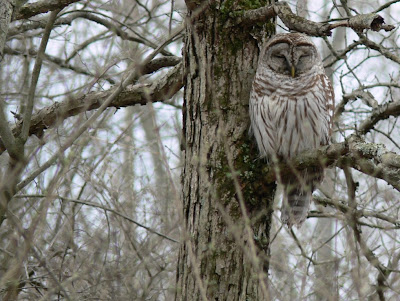 Two years ago, some sharp-eyed birder spotted this dozing Barred Owl taking siesta in a gnarly swamp white oak. The brown-eyed hooter had kindly positioned himself right by a road, and of course word spread. By day's end, more people had fawned over this owl than had seen any of us speakers. We, in essence, were trumped by a chubby bag of feathers who had not even bothered to assemble a PowerPoint.
But that's as it should be at the Shreve Migration Sensation: Birds First.
Come on up, you can pay your ten bucks at the door. All of the details can be found RIGHT HERE.
at March 04, 2011