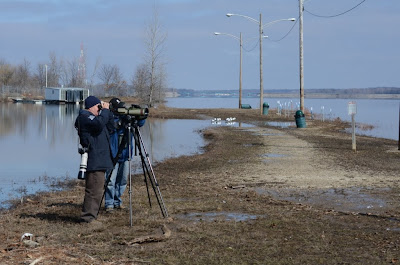 This gravelly spit of land has become ground zero for birders seeking Ohio's rarity du jour - a wayward Royal Tern. The lake is Hoover Reservoir, a long-legendary central Ohio birding hotspot. Many "great" birds have appeared here over the years, and the upper end of the reservoir hosts vast expanses of mudflats most years.

But let's tern the conversation to the bird at hand. I was able to run up to Hoover today during lunch - I have the great fortune of only working about 15 minutes away - and quickly found the bird, along with a number of other birders. 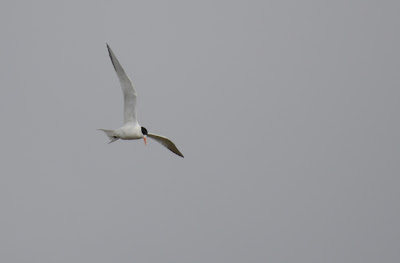 Royal Tern darts into view. As I walked up to the group of assembled birders, someone said those nightmarish words: "it just flew off, as you were pulling in!". Whatever. Maybe so, but it flew back even quicker and we respotted the bird within two minutes of my arrival. The best spot to locate the tern seems to be the first parking lot on the west side of the reservoir, just north of the dam. A map can be found HERE. It is also sometimes seen well from the Walnut Street boat ramp, which is the next boat ramp to the north, a mile or so up from the dam. 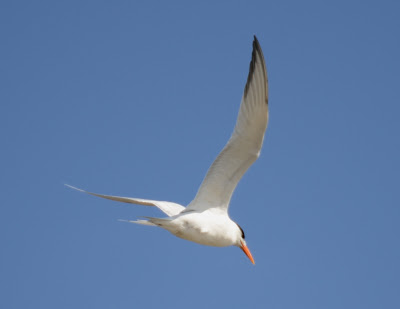 Royal Terns are big, burly birds, common and well known to people who live along the coasts of the Atlantic Ocean, the Gulf of Mexico, and the southern Pacific. In the Americas, it also occurs widely through the Caribbean and along the coasts of South America.
While Royal Terns rarely leave their coastal haunts, wayward individuals do turn up far from home. These vagrants have been seen in the Great Lakes region before. Michigan just had their first record last year, for instance. Ohio had but one prior record - a bird that spent part of July and August of 1995 wandering our Lake Erie coastline. I never did catch up with that one, so it was certainly a pleasure to see this wanderer, and so close to home.
The photos above were mine, taken with my dinky 300mm lens. Now comes the real treat. I ran into Dane Adams at Hoover, and he had his big gun along - an 800mm cannon. If you've read this blog much, you've probably seen some of Dane's outstanding work, as he's good enough to share his photos with me from time to time. And he's done so once again... read on. 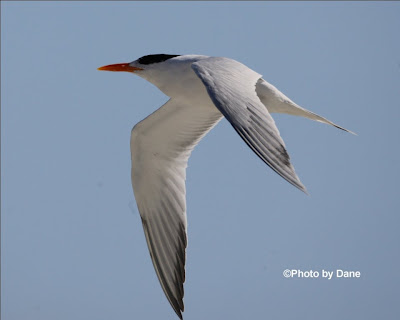 Photo by Dane Adams
Thanks to Dane's photo, it's as if we've got the bird in hand. There are only two likely issues of identification, with the two other jumbo North American terns. Caspian Tern, which is seasonally common in Ohio and a regular migrant at Hoover Reservoir, is a very understandable source of confusion. It is the only regularly occurring big tern in the state, and without benefit of a good look, that's what one would be left thinking.
But with a look like this, the distinctive yellowish-orange bill can be discerned - in Caspian the bill is a honking big reddish thing. Also, the undersides of the primary feathers are pale dusky gray, other than the V of darker pigment that outlines these feathers. In Caspian Tern, the lower primaries are much darker and form a conspicuous blackish blotch. 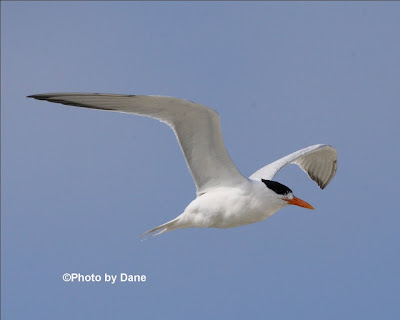 Photo by Dane Adams
Trickier perhaps is separating Royal Tern from its congeners in the genus Thalasseus. In North America, that means the Elegant Tern, found on the West Coast but with a few vagrant East Coast records. That species would be even more exciting here in Ohio, but it can be ruled out by the bill, which is long, slender and somewhat downcurved in Elegant. Among other differences.
But, as Kenn Kaufman noted in a an Ohio Birds listserv post, there are other terns in the world that resemble Royal, notably another Thalasseus, the Lesser Crested Tern. I have no direct experience with that species, but it seems to have a distinctly different wing pattern, such as bolder, wider stroke of black on the trailing edge of the underside of the primaries. But with photos like Dane's now out there, if some expert thinks otherwise they have excellent photographic resources to work with.
Thanks much to Kenny Davis, who first sounded the alert that a big tern was flying about Hoover, and to Vic Fazio for his detective work that led to the identification. This Royal Tern was #364 on my Ohio life list - the only bird list that I keep.
at March 07, 2011

Wow! 364!!! That's a great sighting! I got to see a pair this past Summer out in Virginia along the marshes of the coast. Very cool to watch, they flew together everywhere in a nice tight formation. Thanks for sharing!

I just saw a pair in Chesterton, Indiana. About 10 miles from Lake Michigan. They were in with a big group of Seagulls,but definitely stuck out.