I made a long rambling cruise through southern Ohio yesterday, ostensibly to check for waterfowl on the extensive flooded fields along the lower Scioto River. There were plenty of ducks - and lots of flooding - and I'll post something on that later.

With temperatures pushing 70 degrees, it was the first truly warm and springlike day, and I knew that some of our earliest flowers would be in bloom. So, some special side trips were made to secret little Ohio River Valley hotspots. In these rocky glens, the stones and southern exposure create little pockets that heat up earlier than their surroundings and stimulate the local plants to get a jumpstart on the rest. 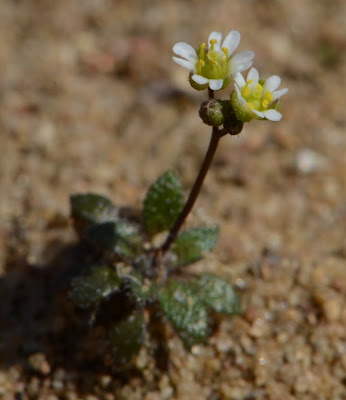 This one wasn't hard to find in sunny sandy and gravelly spots. It's Whitlow-grass, Draba verna, a non-native member of the mustard family. A ubiquitous denizen of open waste areas, the plant is a tiny annual. This one might have towered an inch or so skyward. Small as it may be, these little mustards have a cetain charm to them. 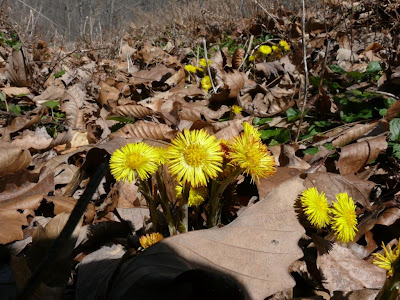 It didn't take long to stumble across lemony drifts of Coltsfoot, Tussilago farfara, festooning roadside banks. This dandelionlike member of the sunflower family is a commonly established Eurasian weed with us, and a true harbinger of spring. It pushes forth naked scapes topped by the beautiful flowers starting about now. Later, once the flowers have largely died away, the leaves will emerge. 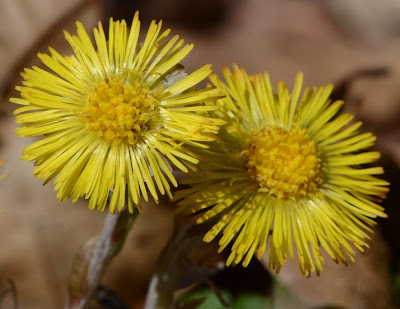 Coltsfoot flowers are quite showy upon close inspection. The myriad narrow rays encircle a little island of disk flowers. When in full fruit, the spherical plumes created by the seeds and their attendant fluff resemble dandelions on steroids. 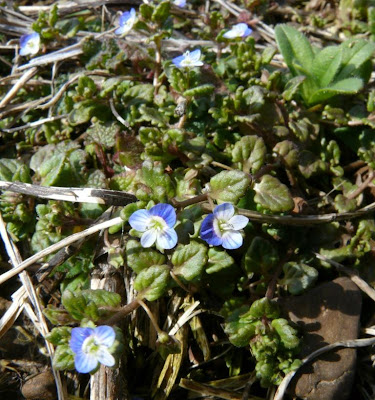 In a few sun-drenched agricultural fields, there were little mats of greenery bespeckled with dots of blue. You must look closely to notice these plants - they are quite easy to pass right by. It is yet another of the long-established Eurasian weeds: Smooth Speedwell, Veronica polita. Some tag it as "gray field speedwell". Personally, I find that cumbersome name about two yards longer than the actual plant. 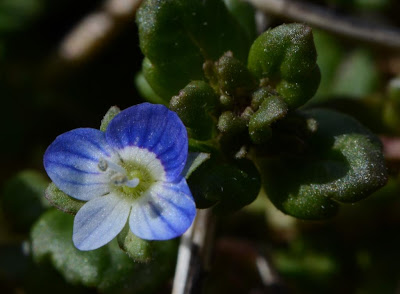 All speedwells, native or not, are things of great beauty when carefully inspected. This flower, photographed from the patch in the preceding photo, is so tiny that a dozen or so could be placed on a quarter. Such miniscule "weeds" are quite adept at dispersing themselves, as their seeds readily adhere to nearly anything and thus are quickly transported far and wide. It should be noted that the definition of a "weed" is in the eye of the beholder. When seen like this, it's hard to think of Smooth Speedwell as a weed. 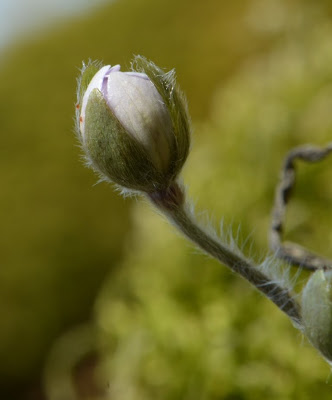 A little white ball nestled in a cup of sepals will soon spread its petals and become instantly recognizable to wildflower enthusiasts. 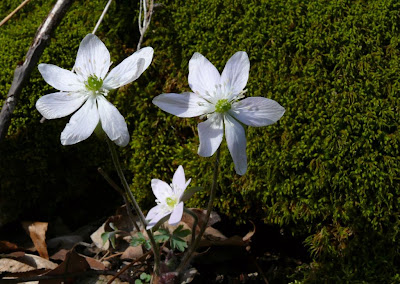 Hepatica, Hepatica nobilis. While not yet peak, some sheltered rocky glens were sporting many flowering specimens, including these stark white ones. A member of the diverse buttercup family, Hepatica flower color can range from pinkish to porcelain blue to rich violet.
Once, our Hepatica were considered to be two species: round-lobed (H. americana) and sharp-lobed (H. acutiloba). The alleged differences had to do with the leaf shape, but these characters don't hold up well and it isn't hard to find intermediate specimens. In a fit of common sense, botanists decided to lump our North American plants with their apparently essentially identical Eurasian counterparts. Bravo! 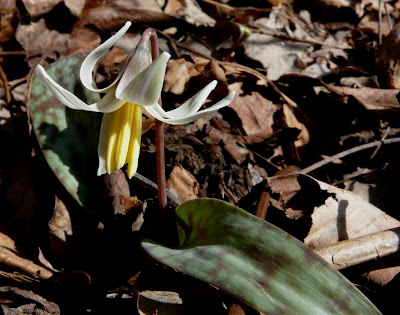 Always a treat, the White Trout Lilies, Erythronium albidum, had begun to bloom. There are places where vat carpets of these small plants will carpet wooded slopes. We have another common representative of this genus in Ohio, the Yellow Trout Lily, E. americanum. It usually follows a few weeks later.
Trout lilies rise from deeply buried bulbs, and are long-lived perennials. I suspect that some specimens, if they live a charmed life, can live for a very longtime. 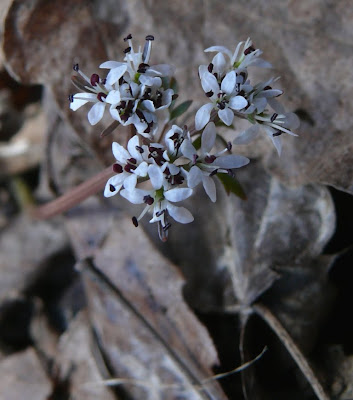 Finally, the true Harbinger-of-spring, sometimes known as Salt-and-pepper, Erigenia bulbosa. This Lilliputian (there you go Janet) member of the parsley family pushes and pries its way through the leaf litter of the March forest, often in profusion on floodplains. Most plants are so small that the casual woodland stroller is certain to miss them; they are so small that some are hard to see from an upright position. The specimen pictured above was gargantuan, perhaps two or three inches in height.
The plants in this blog are the true vanguards of spring. Every week will see new members joining their ranks, and the wildflower army will reach full force in late April/early May in southern Ohio. That's why we hold Flora-Quest then, in the heart of Ohio's greatest forest, Shawnee. If you want to see scads of flowers and learn a lot more about them, join us. Details are HERE.
at March 13, 2011

Can't wait until the climax of Spring wildflowers at Flora Quest! Looking forward to seeing you there!

I had a wildflower surprise, yesterday. I was hiking at about 9000 ft. There, growing in the sun where the snow had melted, was a dandelion! The air temp was in the 30's but the Colorado sun was hot!

Must. Get. Out. I have missed the early wildflowers the last two springs. Looks like if I want to see Hepatica, troutlily, and salt-and-pepper *this* year, I had better get a move on. Thanks for the reminder.

Had my first encounter of the season with Coltsfoot this weekend, too. I was hoping to beat you to it posting about those yellow charmers for a change (this is the earliest I've noticed them), but no such luck. Maybe next year!

Ahhhh! I got my McCormac Lilliputian fix. Now everything is right with the world. :)