Daughmer Savanna, southwest Crawford County, Ohio. This 39-acre place is one of the state's rarest treasures. I found myself flying over Daughmer this morning, en route to Lake Erie, and managed a few photos from 1,500 feet. Nearly 200,000 acres of gently undulating prairie once blanketed this region, covering parts of Crawford, Hardin, Marion, and Wyandot counties. Perhaps 0.000375% remains.

That's right - an almost incalculable fraction of a percent of this former prairie remains in a state that approximates the natural conditions of the prairie. The rest has been converted to agriculture, or had buildings, roads and other development plastered over top. Slightly elevated knolls of the former prairie would have had savannas such as Daughmer; the lowest-lying areas were water-logged and possessed a completely different prairie flora. You can see bits of both in Daughmer, but it's mostly "upland" oak forest. 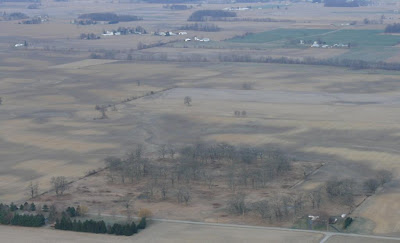 Cast your eyes beyond the savanna and westward into the heart of the Sandusky Plains, and you can see what its fate has become. Conversion from rich prairie teeming with an almost indescribable bounty of natural riches to three primary crops: corn, soybeans, and wheat. 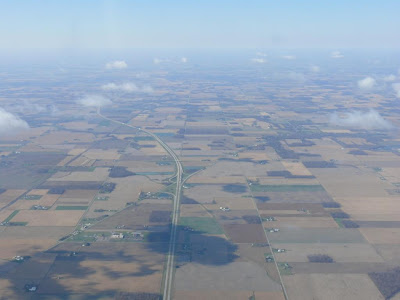 I took this photo in November 2009 a bit further to the north. The quiltlike patterns of farm fields dominate the rich fertile prairie soils. In just this photo, there are probably thousands of miles of underground drainage pipes and tiles working to keep the ground dry enough for cultivation.

Major thanks go to the Crawford County Park District for leading the charge to get Daughmer Savanna protected. It, and the surrounding land, went on the auction block last February. Fortunately for all of us that are keen on conservation, the Ohio Department of Natural Resources was able to broker a deal with the successful bidder, and purchase Daughmer as a state nature preserve.

If you haven't had the opportunity to see Daughmer Savanna, I hope that you can make the trip this summer. I'm not sure what the access plans for the site are yet, but hopefully there will be opportunities for interested parties to visit.
at March 28, 2011

That's it? Oh, my. Photos like that sure put a whole lotta things into perspective, don't they?

Yes, rather depressing what we've done to our prairies. The human species is a bit like a giant amoeba, gobbling up all in our path. We'll pay the price someday.

It did indeed get burned, Buster. Here's a blog that explains the whole thing nicely: http://www.flora-quest.com/blogpage.html

I had a chance to visit the site a few years ago with the Ohio Prairie Association group. I'm so glad to see it protected. One of a kind, that's for sure but it sure makes you want to step back into time 400 years. Just a beautiful property.