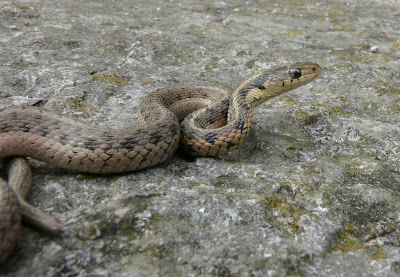 A fine specimen of an Eastern gartersnake, Thamnophis sirtalis, basks on a sheet of limestone along the Olentangy River in central Ohio. We ran across this serpent last Sunday; a day with warm temperatures and a sun intermittently blinking through the clouds. The snakes were out to celebrate the end of winter along with the rest of us.

This gartersnake is back in hiding, I'll guarantee you that. March's notorious yo-yo weather patterns are living up to their reputation, and it's 33 degrees as I write this, with temperatures to dip to 22 tonight. With a high of 36 tomorrow, it's a safe bet this snake won't be showing his smiling face for a while. 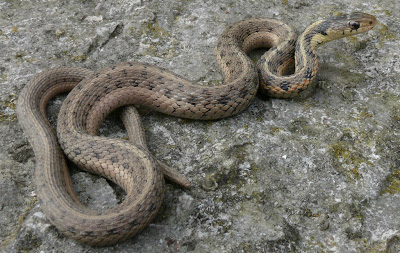 Gartersnakes are one of our more common snakes, and one of the most frequently encountered. They survive well in suburbia, and many a gardener has overturned a rock to find one. No fears - these harmless little animals don't get very big, and normally don't even attempt to bite. Even if they did, you probably wouldn't feel much, so small is their mouth, at least on a young specimen. 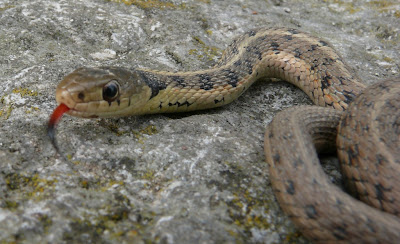 A huge gartersnake might tape out at two feet. Not exactly the stuff of which horror movies are made. Although if you happened to be an earthworm, spider, slug or some other small critter, you wouldn't want to be confronted by this visage.
Gartersnakes have especially showy tongues, and that's not a claim that everyone can make. The basal portion is a striking orange-red, and the terminal fork is glossy black. And a highly functional tongue it is; a veritable reptilian data collector. With each flick of that forked tongue, the snake captures and retrieves airborn chemicals. When it pulls the tongue back into its mouth, the tips of the fork are thrust into something known as Jacobson's Organ. This organ is the snake's data processor, and it translates those chemical cues into information that the snake can process to determine what or who is nearby. 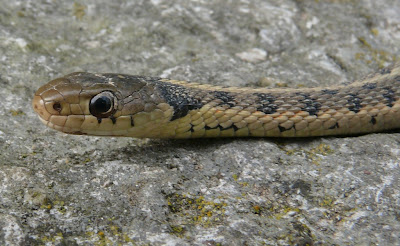 Ophidiophobia is really a tragic thing. That's the fear of snakes, and an abnormally large number of people seem to have it. Worse-case sufferers are even terrified of a charming, tiny little snake such as this one, probably to the point that they won't even look at these photos.
But snakes are among our most interesting animals, and most valuable. I don't think that any of our species are getting any commoner either, at least around here. My travels this year should cross paths with some of our other snake species - at least I hope so - and I'll be sure and snap images. And you'll see them here.
NOTE: Thanks to Ben Warner and Janet Creamer for correcting my identification. I initially thought this specimen was a brown snake, but they set the record straight. I should stick to things without scales :-)
at March 25, 2011

I think they're sweet, an opinion I know puts me in the minority. I wish more people could appreciate the beauty -- not to mention the utility -- of reptiles and amphibians.

Jim. Cool blog about Gartersnakes. Ours down here in SW FL are blue! OK, they have a blue stripe. Called the Blue-striped Garter Snake. Go here:

I used to keep them as pets, when I was a kid. I used to freak my Mom out by letting one go up my pants leg, across the top, and down the other! haha

Thanks for the comments, ye serpent enthusiasts, and I think they're cute, too, Catbird!