The running of the salamanders 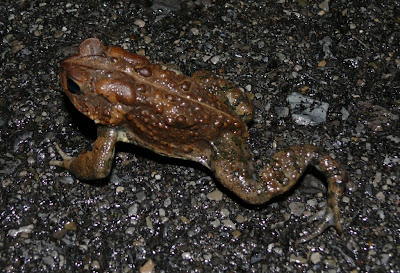 A cold American Toad creeps across the asphalt of a rural western Ohio road. Finally, last night I escaped to the great rainy outdoors to have a go at salamandering. We've already had some good nights - reasonably warm and rainy - and I'm sure that many of our amphibians have already made their way to the vernal pools to mate and release their spawn.

As I'm sure most of the sophisticated readers of this blog know, come the first warm wet nights of very early spring, amphibians move en masse overland to breeding pools. To me, catching these slimy creep-crawlies in the act is a pleasurable rite of spring. And we scored last night, but not in a very major way. It was wet enough, with thoroughly saturated ground and intermittent drizzle all evening. A bit on the cool side at 45 degrees, but well within the operating conditions of our salamanders and other amphibians.

But there wasn't much to see in tried and true amphibian hotspots, and the relatively few animals that I did find came out late; around 10:30 pm. By then, the bewitching hour was drawing near, as I had to get up and go to work today. But some finds were made... 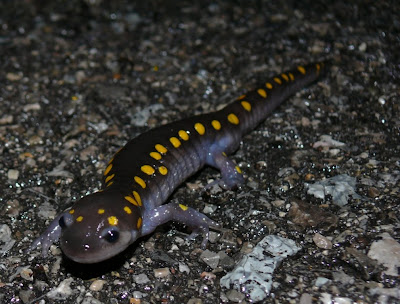 Always a surefire crowd-pleaser, a Spotted Salamander, Ambystoma maculatum, hightails it across the road. This site sports wooded vernal pools on either side of the road, and fortunately for our viscous friends, vehicular traffic is light. Nonetheless, I always find plenty of roadkill on these forays, and that's sad. Bisecting high-quality salamander habitat with roads is an insidious impact that results in sometimes enormous mortality of salamanders and other amphibians. Depending on traffic volume, I suspect that over time entire salamander populations are destroyed by repeated carnage year after year. 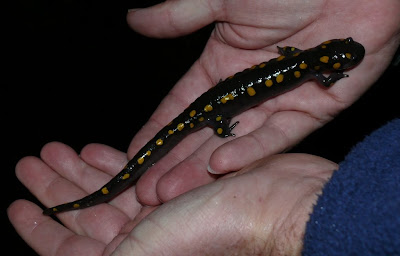 This Spotted Salamander was a big boy; about as large as they come. Spotteds are in the genus Ambystoma: the fabled mole salamanders. For most of the year, they dwell subterraneously, pushing through the damp soil and feeding on various invertebrates. When triggered by various cues in early spring, most mole salamander species burst from the soil and take up an overland march to ancestral breeding pools. Catch it just right and hit a prime spot, and you might find hundreds if you're willing to brave dark, rainy and cool conditions.

An odd duck, this gal. It is a so-called "unisexual" salamander and the area where I photographed her has many. This animal and her ilk are the product of longtime hybridization between several species of mole salamanders. The parentage involves Blue-spotted Salamander, Ambystoma laterale, Smallmouth Salamander, A. texanum, Jefferson Salamander, A. jeffersonianum, and sometimes Tiger Salamander, A. tigrinum.

Almost all if not all unisexuals are female, and individuals have extra sets of chromosomes. The genetic makeup of these beasts varies wildly, as does their appearance. This individual is particularly well markedwith porcelain-blue flecking on its sides, a sure sign of Blue-spotted Salamander genes. I'm guessing that Smallmouth genes are present, too, and who knows what else.
How these things reproduce and carry on is not well understood. I've seen their egg masses, and nearly all of the eggs appear to be only partially developed. Apparently some of them must be fertile and hatch, though. Somehow the unisexual saamander manages to pick up the sperm of fertile "pure" males of one of the species that I mentioned above. I don't pretend to understand the unisexual salamander phenomenon; if you do, feel free to comment and enlighten.
Weird stuff. Well, unisexual or not, mole salamanders are things of great beauty and interest and seeing them is always a treat. Friday night is looking like conditions could be good for another run, and if it is I'll probably be bck out and looking for the mammoth Tiger Salamanders.
at March 16, 2011

Good stuff Jim. This afternoon leopard frogs were hopping across the roads at Delaware WA. I love early spring.

Excellent! I am currently stuck in the herper hell known as Hawaii and am missing the midwest migrations. It was a tough winter and this is always a joyous occasion for me.

I don't claim to understand the mess that is the polyploid complex but here is a general stab at it...

Female salamanders reproduce via "kleptogeneisis". They steal the sperm of nonpolyploid males and use it to trigger development and division of their eggs. Most of the time, the eggs are not actually fertilized by the male sperm and male chromosomes are not incorporated. For reasons unclear, sometimes, male chromosomes are actually used.

The polyploid egg masses seem to have higher rates of die off and fewer eggs reach maturity. One hypothesis is that the eggs that do hatch are more "fit" and able to outcompete the other salamanders.

This is currently fairly heavily studied and very much in flux. I don't know if anyone really has a true handle on the siutation.

Fantastic! I've only helped a few salamanders across the road, and have never beheld a spotted. You've got me wishing for rain, and a good flashlight.

Very cool! Still waiting for another big night here in Athens Co. A friend of mine who's very interested in herpetology believes that Jefferson movements are mostly over. He said that he saw egg Jeff. egg masses early on in February, even through the ice at times. He believes Jeffersons get a move on much earlier most years. Anyway, cool post!

You never cease to amaze. Our own David Attenborough. Love learning new things here in the blog and the comments too.