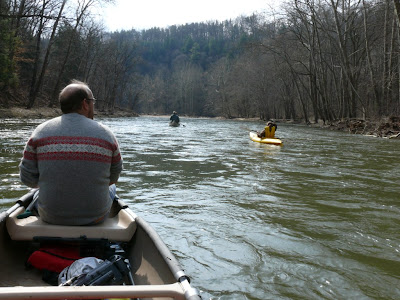 Your blogger pilots a canoe down wild Little Beaver Creek in Columbiana County. I was there last Friday seeking one of Ohio's rarest breeding birds, the Common Merganser. Our party of sawbill-hunters was successful. 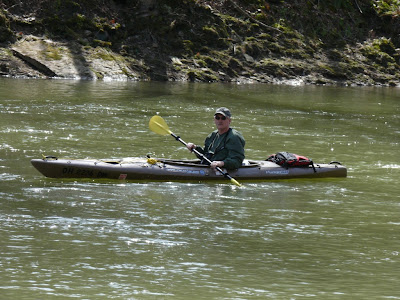 This is Jim Dolan, an accomplished birder who lives nearby and has long surveyed the birdlife of Little Beaver Creek. Using some sort of floatable vessel, such as his kayak, is the way to go. This stream is not readily accessible any other way, and a silent canoe or kayak is without doubt the best way to find mergansers.
A big thanks to Jim and Dan Justice for organizing this float, and providing the boats. 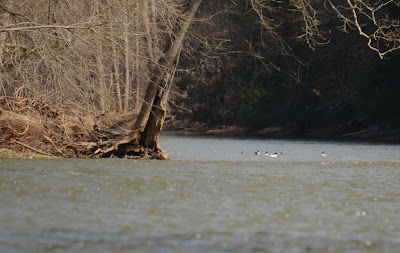 We navigated about five miles of river, and it wasn't long before we happened along the first pod of mergansers. Those gleaming white submarinelike objects down there at the river's bend are the male mergansers, which were actively feeding. Four males, accompanied by three females. Mergansers are sometimes called "sawbills", as they have sharply serrated bills - a perfect adaptation for catching their dietary staple, fish. Common Mergansers are also known as "goosanders" (mainly in Europe), a nod to their massive size. A plump male can weigh four pounds or more. 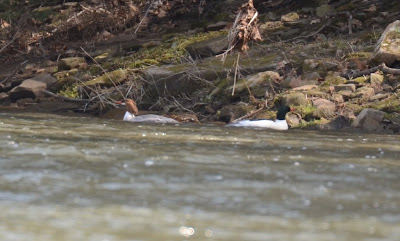 This pair - female on left, male on right - was paired off and quite chummy. Common Mergansers begin breeding very early, and are now forging pair bonds and selecting nest sites. 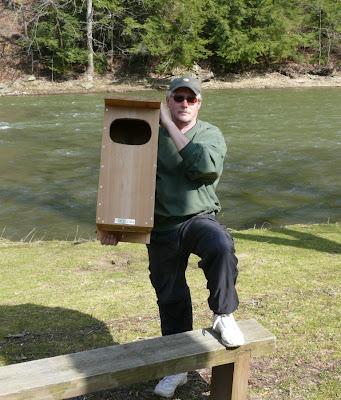 Incredibly, to me at least, Common Mergansers are cavity nesters. They'll use large holes such as those made by Pileated Woodpeckers, or any available natural cavity large enough to accommodate them.
Or nest boxes. Here, Jim Dolan holds a whopping big nest box that will soon be mounted to an appropriate tree along the stream. With luck, the mergansers will utilize it. Jim and Dan Justice began building and erecting nest boxes a few years back, and it appears the mergansers are taking to them. It's hard to get an exact handle on just how many breeding pairs there are, but the number seems to be rising. 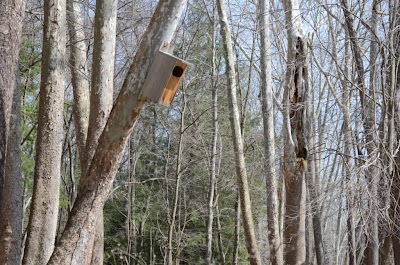 Nest box high on a sycamore along Little Beaver Creek. It must be pretty cool to actually see one of these jumbo ducks enter a cavity like this. Strikes me as a bit like trying to toss a sledgehammer through a donut hole, but somehow the enormous ducks readily navigate the entrance. Like Wood Ducks, the young mergansers have a bumpy introduction to life. A day after hatching, the tiny ducklings are coaxed to the box's entrance by mom, and told to jump. Soft and bouyant as they are, the ducklings bounce harmlessly off the forest floor and dash to the adjacent stream. Mrs. Merganser is a good steward, riding close herd over her flock, which might be a dozen ducklings. She'll even allow them to climb on her back and will ferry the little ones around.
Common Mergansers have an extensive breeding range across northern North America, and Eurasia. Little Beaver Creek in Columbiana County is at the extreme southern limits of their distribution. I feel pretty confident that this species wasn't nesting here until fairly recently. The region was covered fairly well in the first Ohio Breeding Bird Atlas, which ran from 1982-87. And there have been many sharp eyes on the creek since then, and I believe it was 2006 when the mergansers were first noted as possible nesters.
Thus, it appears we have a northern species expanding its range southward, at least slightly. We're seeing the same thing with breeding Blue-headed Vireos in Ohio, and some other northerners. It may be that the mergansers are merely reclaiming former nesting grounds, following a long-term recovery of the habitat. I don't think so, though, as the valley of Little Beaver Creek has long had the extensive mature forest buffering the stream that Common Mergansers require. Also, mergansers were found in appropriate nesting habitat along Conneaut Creek in extreme northeastern Ohio this year. It'll be interesting to see if the Conneaut birds remain to nest. 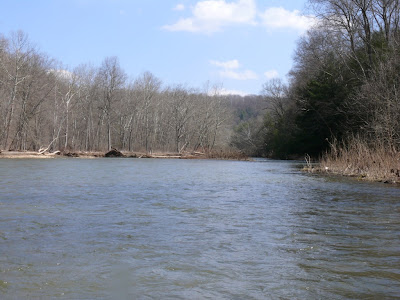 Little Beaver Creek is a state and national wild and scenic river; an appropriate designation. The river and its associated habitats rank high among the wildest places that one can find in Ohio, and its aquatic habitats are among our most pristine. That's why Common Mergansers nest there.
I'm grateful that we still have places like this. And I'm also greatly appreciative of people like Jim Dolan and Dan Justice, and many others like them, who work to protect and enhance Little Beaver Creek.
at March 21, 2011

Awesome! That is wonderful, glad to hear it! Sounds like a fun adventure, I am going to get out on my canoe this week too : )

I can't believe those huge ducks get into a cavity to nest. I hadn't ever thought of it before. WoW.