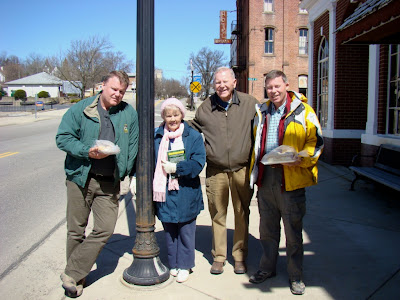 Photo: Cheryl Harner
Your blogger (left) leans against a post in downtown Shreve. That's (from L to R) my mother, father, and brother Mike. They all made it up for the annual Shreve Migration Sensation, which dominated this small town today, and temporarily grew the local populace by 1,000 or so people. We had just stumbled from the adjacent Des Dutch Essenhaus restaurant, and my brother and I carry plunder: cookies, and some sort of insanely robust frosted rolls. 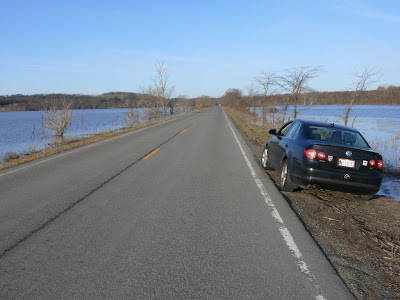 Funk Bottoms Wildlife Area along State Route 95, between the burgs of Funk and Blachleyville. Lots of water, a foot or so more and we'd not be seeing pavement.
There never seems to be enough time to go birding during this jam-packed event, but Peter King and I went up very early, and squeezed in a few hours of birding first thing in the morning. 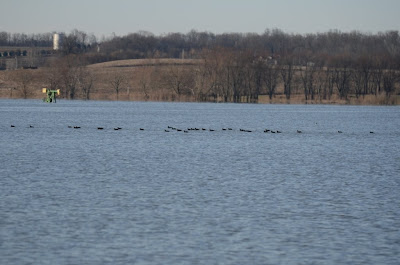 A ragged line of American Coots steams past. Click the pic, and look really closely, and you'll see a drake Bufflehead behind the mudhens, towards the right side. Funk Bottoms sits in a rather massive glacial outwash valley, and when it floods in the spring, it really floods. There was so much water today that the place resembled a miniature Lake Erie.
Ducks abounded. Several thousand Lesser Scaup, and a great many Ring-necked Ducks, Redheads, Gadwall, Northern Pintail, and at least a smattering of nearly everything else ducky. Highlight: A ravishing adult male Black Scoter, his bulbous orange bill glistening. I like ducks of all stripes, and could watch them pretty much all day. 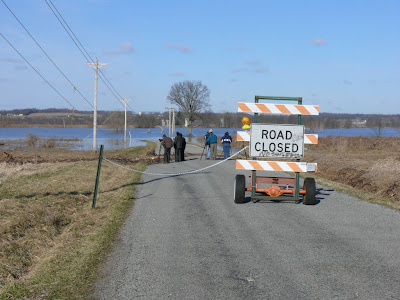 While Route 95 to the north stayed above water, the roads to the south did not. This is Wilderness Road, and as the sign makes crystal clear, the road is CLOSED. Bright fellows that we are, Peter and I figured that out without benefit of signage. You'd have needed a boat to navigate Wilderness Road today. 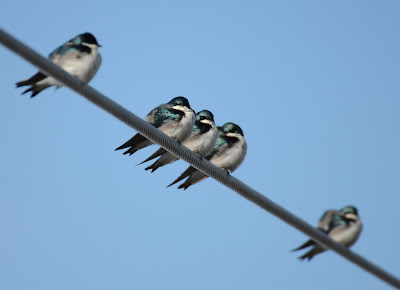 We noticed a bevy of Tree Swallows huddled on some wires near the Wilderness Road floodwaters, and I moved in for closer inspection. When I made these photos, the mercury indicated a brisk 22 degrees, and the overnight low had plunged into the teens. These swallows are tough customers, make no mistake. Few primary bug-eaters would venture this far north when the weather can turn on a dime from warm and sunny to frosty and freezing. 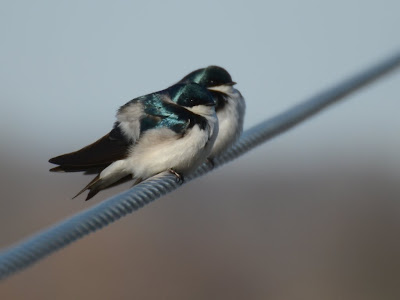 The swallows were more interested in remaining fully fluffed than they were with me, and I was able to make a close approach, act the paparazzi, and leave without disturbing them. A common reaction to plumply fluffed birds such as these Tree Swallows is to ooh and aah and comment on their cuteness. This fluffiness is pure survival mode, though. By expanding their feathers, the swallows maximize heat retention by trapping and warming air near their body.

Our first Tree Swallows typically return to Ohio by early March, and they are fairly plentiful by now. At least part of this intense urge to push the envelope and fly north into potentially perilous late winter weather is due to their cavity-nesting habits. Competition for cavities is fierce, and the early bird gets the worm, so to speak. The downside is the very real possibility of perishing in a brutal bout of lion-like late March Ohio weather.

Your talk on hummingbirds was outstanding. And - Thanks for sharing your scope so we could view the Scoter - a life bird for us.

Glad you saw the scoter, and sharing the scope is never a problem!

Glad you liked the talk; thanks for letting me know. Would have been even better without the technical snafus!

The tree swallow pics are great! I know it's a magical moment when you find birds that allow you some time to get great shots of them just doing what they normally do. Fluffing without worrying about anything but the cold wind.

It was so nice to finally meet you. Your hummer talk was great! I wish I would have heard about the scoter, that would have been a life bird for me. Hope to see you at our (BSBO) festival in May. Thanks, again!

Thanks Jeff, and ditto Randy - great to see you up at Shreve. I'm sure our paths will cross many times.

It was great to see you as always Jim! We missed the Scoter but we did find a lifer Eurasian Wigeon near Orrville!
There's always something to see at Shreve.