Deciphering the language of chipmunks 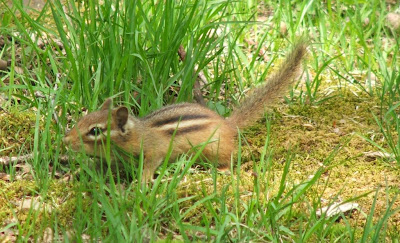 Eastern Chipmunk, Tamias striatus. The little beasts certainly deserve our thanks and appreciation. Vital cogs of the eastern deciduous forest ecosystem, "chippies" serve valuable roles in seed dispersal and as food for things with a taste for meat.

But chipmunks don't like to be eaten. And they express their displeasure with organisms who might pose them a threat loudly, and with gusto. We've all heard their scolding chitters, and most of these calls - two out of three, it turns out - are pretty intuitive. But their other oft-given sound has always puzzled me, as it is quite different than other chipmunk sounds.

Well, I learned a great thing today, courtesy of Lang Elliott and his excellent blog. It's Lang's incredible recording of Hermit Thrushes and companions that was the subject of the previous blog. 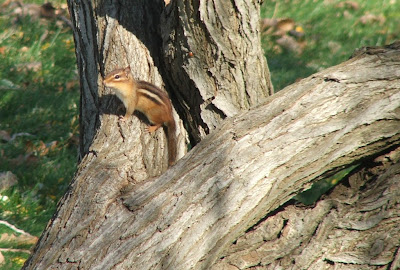 It turns out that Lang did extensive field studies on Eastern Chipmunks as part of his research for his masters degree. He tracked the behavior of an upstate New York population, and was able to place their vocalizations into three major categories: high-pitched chips; chip-trills; and clucks. The first two types are pretty intuitive if you've spent much time watching chipmunks. If they see a threat, such as us, they offer up a series of loud chips. Ditto the "chip-trill" calls, although Lang was able to show that one is invariably given as the animal races into a subterranean hiding spot, and now that I know that, that's been my experience, too.
It was the third call type, the "cluck", that always puzzled me. It's a conspicuous forest sound, and I've found that a surprising number of people don't associate the call with a chipmunk. With good reason - it is quite unlike their other sounds. The cluck call sounds like a drumstick being rapped against a hollow log - a deep TOCK, TOCK sound, at rather well spaced intervals.
Well, Lang's known about this since the 1970's and his field studies, and perhaps you did, too, but it's new knowledge to me. The cluck notes are the chipmunk's warning calls for AERIAL THREATS! How cool is that?! Say a Red-shouldered Hawk is perched close at hand. The observant little chippies go on high alert and start issuing hollow TOCK notes to their buddies while the raptor or owl is in the area and of potential danger.
There are three reasons that I am greatly pleased by this knowledge: One, I don't like it when I encounter something frequently and don't understand it; two, I can now share this very cool factoid when CLUCKING chipmunks are encountered; and three, we can use the chipmunks' alerts as a cue to look for nearby raptors!
Thanks, Lang, and be sure and visit his blog RIGHT HERE and listen to chipmunk calls for yourself.
at March 03, 2011

ONe of my favorite little creatures. Oddly enough I don't see them often. I find them facinating.

Ah. It appears we have someone in our midst who has been routinely bested by these clever beasts. His two-word comments speaks volumes: anger, frustration, fear, bitter defeat, intellectual flummoxing, embarrassment and terror.

What, growing a garden for the chippies, are you, Dave? Sounds as if they've sorely outwitted you.

Bet all of that expensive bird food of yours is plumping their fat little cheeks, too.

Oh THANK YOU for passing along this tidbit of knowledge. Our chipmunks drive me nuts sometimes with their incessant "clucking". But now I'll use it as an alert to grab the binocs and scan the sky for hawks. Awesome!!

By the way, we've just started seeing our chippies come out of torpor this week here in SE Michigan. Spring IS coming!

Thank You for the clucking info. We have 5 or 6 we feed. Today we noticed they were in large crevices of our maples, all taking a turn clucking. We do have eagles and hawks come in. Lower N.Y.

I have a chipmunk that has taken me awhile to do this, but he or she will come over to where have been feeding it peanuts, and I can squat there as it fills its cheeks with the peanuts and listens to me talk to it. It is actually pretty cool. I do not try and touch he or she, the little bugger is spoiled though. Lol

cool, now I also will look around for the hawk or owl! I have chipmunks like crazy now that I do not have a terrier anymore. One of them is so tame now, I can PET HER or him... so cute. They come for the sunflower seeds I put out for the birds. I don't mind them.

I found your site when searching why chipmunks make that clucking sound. It's hard to buy the idea of my chipmunk is a
sounding an alarm about an aerial threat, and here's why. He does this often. He sits on the top of our woodpile, about the same spot every time and clucks for a good 15 minutes. He's not on the wood, per se, he's on the frame of the structure my husband built to hold the wood. This is about 15 feet outside my door, so I can see the whole thing, even his little body undulating with each cluck. If he's warning of an aerial threat, he is making himself a great target. From that perch, a hawk could just swoop down and get him right from where he sits.

He looks more like he's announcing that he's king of the hill. We have a bird feeder on a nearby tree and I spend a lot of time keeping this chipmunk out of the feeder. Maybe he's telling the birds to go away he's hungry?

Living in upstate ny, im glad i found this page. We have a pesky cat always bothering the birds, squirrels, and chippies (all of which i love). The cat was just stalking but "appeared" to leave. One brave chippie stayed, chirped extremely loud for a good ten mins, and now it and even most of the birds and all squirrels and chippies are nowhere to be seen. Survival... And i hope it worked!

I have pet chipmunks that we rescued. I have searched all over the internet looking to see what this sound is & it is not always an aerial attacker. As I sit here, he is in his cage, always perched on a higher level clucking. There are no hawks that I can see. He is sitting there, not eating, not looking outside. Sometimes I wonder if it is a call because he is bored.... Or just ranting. It's always when he is sitting up there & the other one isn't next to him....

I agree that the clucking can't always be an aerial predator. We are in a forest in Quebec, surrounded by chipmunks, and in the mornings we have a cacophony of clucks that goes on for a good 15 minutes or so. Definitely more than one of them clucking at once. Perhaps a territorial thing?
BTW, can there be enough chipmunks to cause sinking in a lawn? That seems to have appeared along with an increase in chippies.