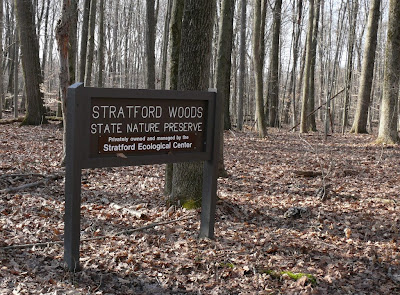 This Saturday past, I attended a wonderful workshop on vernal pools. It was held at the Stratford Ecological Center, a jewel of a place not far north of Columbus in Delaware County.

The workshop was organized and sponsored by the Ohio Environmental Council, and featured a cast of fine speakers on a variety of topics. 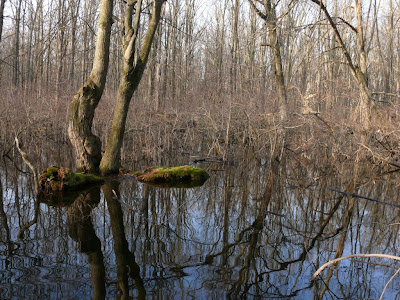 I arrived well in advance of starting time and the arrival of the other attendees. I wanted to wander in solitude through some of Stratford's 236 acres, and drink in the ambience of the large vernal pools. Just in case you're not up on wetland types, a vernal pool is a depressional wetland that floods only for a relatively brief period. Many vernal pools are small, and in this part of the world they are typically found in forested habitats. Winter snow melt and spring rains fuel them, and vernal pools are brimming with water in March. Come summer's end, they'll start to lose water as rainfall lessens and evaporation takes its toll, along with the increased thirst of surrounding plants wicking up the pool's water. By late summer, vernal pools are often bone dry.

But now, at their peak, vernal pools are packed with an incredible abundance and diversity of fauna. The pool in the photo is an absolute gem of a place. It's loaded with salamanders, frogs, fairy shrimp, caddisflies, Wood Ducks, and scores of other beasts great and small. Small, mostly. 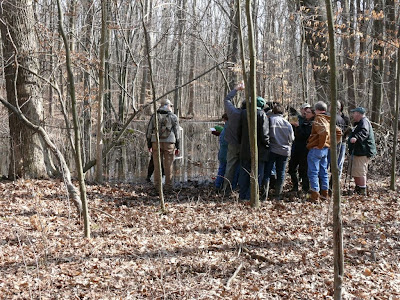 After our classroom lectures had concluded, the group headed afield to learn the secrets of vernal pools up close and personal. Our outdoor lessons were LOUDLY serenaded by legions of tiny frogs; a species that is probably our most conspicuous amphibian right now. Everyone who ventures near vernal pools or other shallow, seasonally flooded wetlands and has their ears open is familiar with the abrasive rasps of Western Chorus Frogs, Pseudacris triseriata, whether they know its name or not. 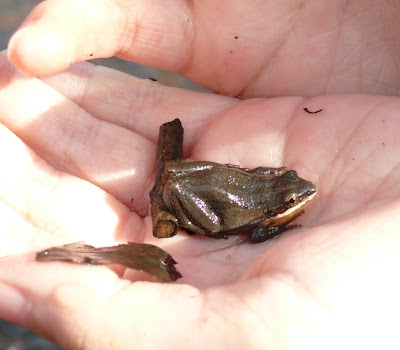 A little girl in our group spotted this throaty little beauty floating in the pool, and snagged it with a deft lunge. Western Chorus Frogs are only an inch and a quarter or so, but have the vocal pipes of a Pavarotti. Get a whole gang of these guys together and bent on impressing the ladies, and the collective din is nearly overwhelming.
For much of the year, these frogs are quiet and retiring, and not likely to be noticed. Not now. They just can't be missed.

I made this video while standing at the edge of the pool in the photo above. It was around 9 am, and the air temperature was 39 degrees. Later in the day, as things warmed, the frogs became even more intense in their singing.
Western Chorus Frogs are a classic sound of spring throughout Ohio and the Midwest. In order to keep this froggy symphony playing, we have to protect the vernal pools and other ephemeral wetlands that are the frog factories that crank them out.
at March 20, 2011

Jim, I read your columns in the Dispatch and bought your book on Birds of Ohio. I remember you from when your family lived on Weisheimer and your Dad worked for Schwenker, Teaford, etc. It is good to see Weisheimer kids grow up and do so well.
I have a question for you about a squirrel that comes to my tray bird feeder.
He/she came yesterday and looked like he had a piece of lettuce stuck to his back but when I got up and looked it was his fur. He came back today and it is really in his fur, not on his fur like paint would be. After trying to take a picture without any real success (can't get close enough) I wonder if you have any ideas on what would cause this.
I called Metro parks about this yesterday and the naturalist had no answer except the he probably got into green paint. I don't think that is the answer since paint would be limited to where he touched it. If you can give me any ideas on this, please respond at melvafisher701@hotmail.com. I would appreciate your ideas.
Say hello to your Mom and Dad for me. I remember having to help find Johnnie when he was little and climbed over the back fence to get away from home. That was a great neighborhood back in the 60's.

Thanks for any help you can offer for my green squirrel.
Melva Fisher
p.s. He was gray before and I do think it is the same squirrel who has been coming for some time.