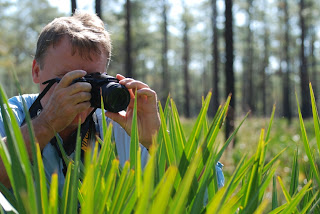 Your narrator at work in the saw palmetto, photographing one of the coolest insects in the southern pine woods. Shortly into my recent foray into the Okefenokee National Wildlife Refuge, I was distracted by a very distinctive singing insect, the likes of which I had never heard. It was clearly one of the meadow katydids, but this species possessed an incredible booming voice. It sounded like a hopped industrial strength automated lawn sprinkler, and even with the distraction of chortling Red-headed Woodpeckers and the odd squeakabilly Brown-headed Nuthatches piping away, I easily noticed the bug's solos.

Being a bit of a student of these sorts of things, I figured the little singer must be the red-headed meadow katydid, Orchelimum erythrocephalum. 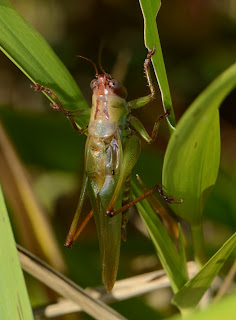 Into the scrub I plunged, and rather quickly hunted down the little fiddler. Bingo! A "life" insect, and one that I had wanted to see ever since crossing the red-headed meadow katydid's path in the lush pages of The Songs of Insects. In this dorsal, or top view, the animal may not look like much, but just you wait. 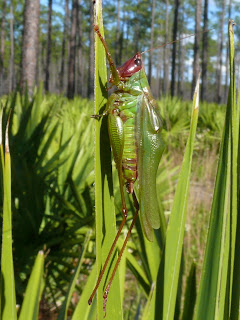 Wow! What's not to like about a red-headed meadow katydid? The deep blood-red face is an incredible contrast to the bug's lime and forest green overall wash, and the rear abdominal segments are also striped in red, creating an artistic complement to the fore part of the katydid.

I was instantly smitten with these red-headed meadow katydids, and hunted up and photographed several of them. The six-legged extroverts are not hard to find, once one is tuned in to their melody. LISTEN HERE. The singing males, such as above, typically mount the highest leafy perch available, and belt their song out to the masses. You could easily hear a singer from 75 feet away. 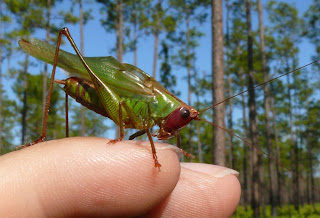 Meadow katydids, and this species in particular, are rather easy to befriend. Just slowly extend a finger towards the animal, and as it comes into range, the katydid will investigate you with its long wiry antennae. Detecting the presence of salts and other nutrients on your skin, presumably, it'll climb right aboard. Handling the animals in this way makes for fabulous photo ops.

I would like to know more of the variation in the red-headed meadow katydid. The Okefenokee insects appear more colorful and boldly marked than most of the images that I've seen, and the eyes seem more strongly blue. But the song is spot on with all of the recordings that I've heard. 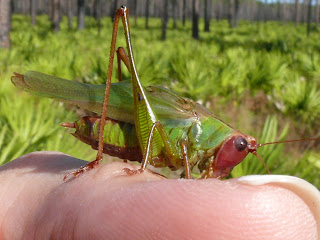 Of course, befriending one of the larger katydids - and red-headed meadow katydids are bruisers in comparison with most of the others - brings on its risks. The reason they like to climb aboard us is to rasp at our skin. Katydids are facultative feeders, tending to graze on whatever is handy, and that's usually plant material. They have very powerful mandibles for crushing seeds and other hard objects, and occasionally can really put the pinch on, especially when they go for your cuticles. It's always fun to help encourage a katydid onto an uninitiated person's finger, and watch their reaction with the first strong nibble.

As I write this entry, the temperature outside is in the low 30's, and there are intermittent snow flurries. I wish I were back in Georgia's piney flatwoods, where the red-headed meadow katydid song resonates!
at November 29, 2011

Great shots I always learn something when I stop by. And it is nice to see some green since we are pretty white here today.

Hi Guy: I always appreciate your nice comments, and am glad that you are a regular visitor to my site!

Were those pictures with the FZ50,carried on a Nikon strap or is the Nikon out of the pic?

Hi Rick, I think all but the second photo were taken with the Panasonic FZ 50.

That is a neat looking/sounding katydid. Thanks for sharing.

Thanks for these recent post. It'll give us something to look for next summer for our trip to South Carolina. (Santee State Park, Edisto Beach State Park)