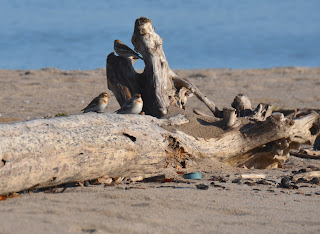 Resplendent in their rust and cream feathered finery, three Snow Buntings, Plectrophenax nivalis, pose on a piece of Lake Erie driftwood. I encountered these hardy little "sparrows"* a few weekends back, and spent nearly an hour stalking and observing them. This trio was part of a group of a dozen birds, and by moving slowly and cautiously, I was allowed to infiltrate their ranks and make some interesting observations at arm's reach.

*Dammit one thousand times over! The taxonomy of birds is in an ever-increasing state of upheaval, and snow buntings are now no longer placed in the family of true sparrows, the Emberizidae. They, along with the longspurs, have been segregated into the Calcariidae family, or longspur family. I am still referring to snow buntings as sparrows until I come to accept this change. 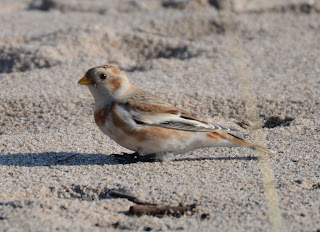 As is often the case with birds that are habitual ground foragers, Snow Buntings walk, rather than hop. Walking is a more efficient form of locomotion for ground-bound birds. When a pack of buntings bursts into flight, they become quite conspicuous, as if a sudden gust blew giant snowflakes in to the air and is swirling them about. Bunting flight is invariably accompanied by their dry throaty rattles punctuated by clear musical TSEW! notes. But when on a sandy substrate or in a barren field, the buntings seemingly vanish, their patterns that are so bold and contrasty in flight now serving to match them to the earthy tones of the soil. Their rather sluggish mousy waddling gaits when at ease further serve to make detection difficult. 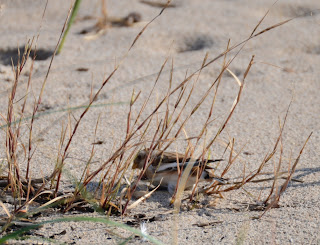 I was especially interested in the buntings' feeding habits. It wasn't long before one of my subjects ambled into a tuft of grass, and began piggishly plucking the fruit from the plant. This is not just any old grass, though - it is purple sand grass, Triplasis purpurea, which is a rare plant in Ohio. For the most part, this grass is confined to sandy beaches along the Great Lakes in the Midwest, and it in general is not common in the southern reaches of its Great Lakes distribution.

As Snow Buntings are quite fond of foraging along Great Lakes beaches when they make their wintertime peregrinations down to our latitude, they certainly consume a lot of purple sand grass fruit as well as the seeds of other beach plants. And thus, these beautiful sparrows undoubtedly become important agents of dispersal for these plants. A percentage of plant fruit will pass through a bird's digestive tract intact and be expelled, possibly a far distance from where the fruit was eaten. Over the long haul, it is probably birds that are responsible for many plant species' distribution. I believe that sparrows, in particular, are important agents of dispersal for numerous grasses and sedges. I wrote about another likely case of interesting Snow Bunting seed dispersal RIGHT HERE. 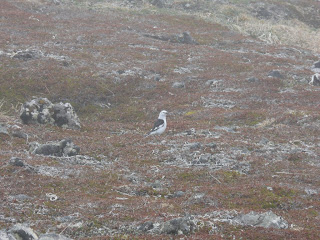 The nearest breeding Snow Buntings to Ohio and Lake Erie are some 2,000 miles to our north. I took the photo above last June, showing a male Snow Bunting in his stunning breeding plumage in the barren rocky scree of St. Paul Island in the Pribilof Islands. This chain of volcanic islands is located near the middle of the brutal Bering Sea, several hundred miles west of mainland Alaska. It was a treat to see these birds that I know so well from their wintering grounds, on their nesting grounds. St. Paul Island would be charitably described as a barren place by most people, and the Snow Buntings seek out the bleakest haunts in this lunar landscape. 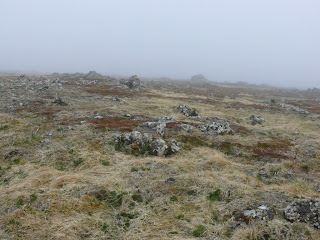 Fog enshrouds Snow Bunting nesting grounds on St. Paul Island. While most people would think this a harsh place, and rightfully so, the little buntings thrive here. The larking male buntings brought brightness and light to the misty barrens with their rich musical finchlike bubblings. Eternal optimists, the males return weeks in advance of females, and will routinely endure temperatures that plummet far below zero.

To them, the winter beaches of a place such as Lake Erie represents a balmy Floridian vacation.
at November 10, 2011

An interesting and informative post. I have always wanted to see Snow Buntings, they are very high on my wish list so it was fun to see your pictures.