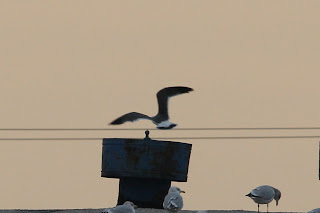 Photo: John Pogacnik
A first state record Black-tailed Gull was found this morning by Craig Holt at the harbor at Ashtabula, Ohio on Lake Erie. Word traveled quickly and a number of people were able to get to the site this afternoon and relocate the bird. Thanks to John Pogacnik for the documentary photo, above.

The Black-tailed Gull, Larus crassirostris, is an Asian species that is a very rare vagrant to North America. There are only a few records from the Great Lakes, and as previously mentioned, no priors from Ohio.

I'll be in Ashtabula bright and early tomorrow, and hope to see the animal. More reports/photos may follow.
at November 16, 2011