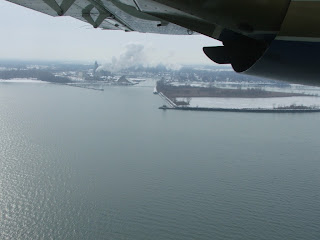 Five hundred feet over Lake Erie and looking due south to the mouth of the Huron River at Huron, Ohio. I took this photo about two years ago, during a survey flight to document waterbirds on the lake. Nickel Plate Beach, where I made the Bonaparte's Gull photos that accompanied the preceding post, is the snow-covered bare patch on the photo's upper left corner.

A few hours after I made yesterday's blog entry about Bonaparte's Gulls, Doug Overacker made an interesting post on the Ohio Birds Listserv, as follows:

"Julie Karlson and I stopped near the Corps of Engineers Visitor Center at Buck Creek State Park this morning to scan the lake for waterbirds. I started scanning the lake and spotted some Horned Grebes. A Bonaparte's Gull was there with them. I scanned some more and found another Horned Grebe also accompanied by a Bonaparte's Gull. Then I found a Pied-billed Grebe and it was also accompanied by a Bonaparte's Gull. I watched the grebe dive and the gull flew. Soon the grebe came up and the gull landed right next to it. Again the grebe dove and the gull flew only to land next to the grebe when it came up. It repeated this one more time while I watched. My guess is that if any of the grebes came up with a small fish the gull would try to claim it. Are there any other explanations?" 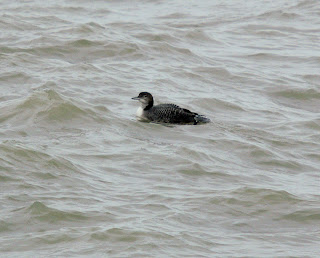 Common Loon in basic plumage, Lake Erie. Photo courtesy Ernie Cornelius.
Doug's observation is an interesting one, and a phenomenon that I have observed dozens of times. During our Lake Erie surveys, we would fly at an altitude of 200 feet, and follow rigid transect lines that criss-cross the lake. Such a perspective offers a magnificent study of huge swaths of Lake Erie, and a unique angle on its bird life. During late fall surveys, we would encounter as many as several hundred loons resting or feeding far out on the lake. It wasn't long before we noticed that actively diving and feeding Common Loons would usually be attended by small squadrons of Bonaparte's Gulls, anywhere from a few birds to a dozen or more. Indeed, we quickly learned that we could spot feeding loons from far away by the concentrated little clouds of Bonaparte's Gulls. This was most helpful as things happen quickly in a fast-moving airplane and the gulls put us on alert to be prepared for loons. 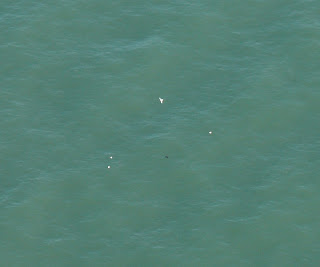 As with all photos on this blog, you can click the photo to expand it. This photo and the next are not great, but I took them in flight as we passed over loons being attended by Bonaparte's Gulls. In the photo above, the loon is easy to see as the big brown surfaced submarine of a bird. A few gulls are hanging with it waiting for some action.

What sort of action? Gulls are well known kleptoparasites, a term that refers to thievery. It is applied to gulls, jaegers, and other creatures that routinely steal food from another animal. We've probably all seen gulls harassing some hapless tern until it disgorges its catch, which the gull then snaps up and swallows. That's kleptoparasitism.

When we first observed the loon-Bonaparte's Gull interaction, we assumed we were witnessing a case of kleptoparasitism. The loon would surface, and the gulls would attempt to snatch its fish away. Except that it became apparent that the gulls never made contact with the loon - and a Common Loon outweighs a Bonaparte's Gull by 21 times. Rather, the surfacing of the loon would send the pack of gulls into a frenzy and they would alight and dip at the water's surface in the immediate vicinity of the just-surfaced loon. 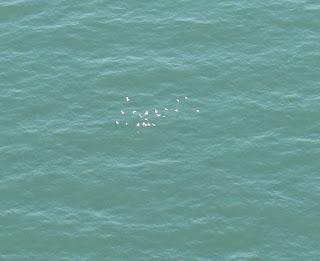 This photo shows a small mob of Bonaparte's Gulls in a frenzy induced by a surfacing Common Loon. What it turns out is happening is that the loons, obviously, are hunting over schools of small fish. It seems that the entrance of a large fast-swimming underwater avian predator throws the fish into a panic, and small fry such as emerald shiners are flushed to the surface. The gulls have learned this, and are poised and ready to attack the fish that arise along with the loon. Such a relationship is known as commensalism: one species benefits from an interaction while the other is unaffected.

I plumbed the literature to see if anything had been published specific to commensalism involving Bonaparte's Gulls and loons or other diving waterbirds, and sure enough, there are a few snippets of information out there. The Birds of North America account of Bonaparte's Gull has this to say:

A brief note from The Auk, Vol. 85: 1, 1968 is entitled Feeding interaction between Bonaparte's Gulls and Horned Grebes. It reads as follows:

Several times between 19 and 28 December 1966 at West Panama City Beach, Bay County, Florida, my wife and I saw Bonaparte's Gulls (Larus philadelphia) and Horned Grebes (Colymbus auritus) feeding together, the gulls eating food the grebes brought to the surface. The grebes fed leisurely about 150 feet offshore, usually in groups of three to six. Two to three times as many immature and adult Bonaparte's Gulls usually fed with them. As the grebes dived, the gulls swam or flew above them. When a grebe surfaced, a gull was usually at the spot for any bits of food it could salvage. We observed no physical contact between birds during these encounters. Neither A. C. Bent (U.S. Natl. Mus., Bull. 107, pp. 23-25, 1919, and Bull. 113, pp. 177-179, 1921) nor R. S. Palmer (Handbook of North American birds, vol. 1, New Haven, Yale Univ. Press, 1962; see p. 79) mention such associations between these species or between either of these species and other species.--Julian L. Dusi, Department of Zoology, Auburn University, Auburn, Alabama.
at November 07, 2011

Bird behaviours are just amazing to observe but even more fun when an expert explains it.

I never realized that gulls – though so beautiful – are such thieves!

I definitely haven't given enough credit on how intelligent gulls are.

How interesting! Thank you for this peek into the wonders of the animal world!