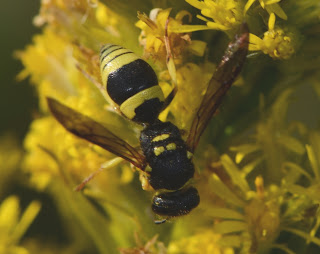 A tiny European tube wasp, Ancistrocerus gazella, laps nectar from one of the season's last Canada goldenrods. I was out a week ago on a brief photographic interlude, and stumbled across one of these miniature beauties. As is often the case with bugs, I didn't know what it was.

I do know enough about entomology that I realized it was a wasp, and that at least provides a starting point. But just knowing that generality wasn't good enough. I am without doubt a born taxonomist, although I don't say that to mean that I am a good or gifted taxonomist. It's just that I can't stand NOT knowing the name of something. I don't like generic identifications. 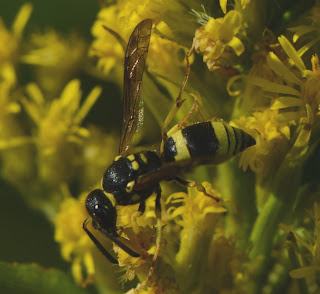 Aspiring to know the name of every creature one encounters brings a certain set of problems. Especially in the world of bugs. One would quickly be driven mad, and use every minute of their waking hours, trying to pin names on every insect encountered, at least if you're in the field a lot and looking hard at things.

I was particularly curious about this micro-wasp for two reasons: it was striking in appearance; and it was a species that I was pretty sure I hadn't yet come across. So, after obtaining these so-so images - but they do show diagnostic characters - I set out to name it. Fortunately, I soon stumbled into THIS PAPER, which does an admirable job of delineating our vespid wasps. Largely by matching photos, I came up with an identity of Ancistrocerus gazella.

However, the wasp world is enormous, and there are plenty of look-alike species. Also, in this case, I could find no reference to this introduced species of wasp as being recorded from Ohio. So, where to turn for expert input?

This website is certainly the most comprehensive and awesome library of insect information on the Internet. Legions of experts and specialists routinely lurk there, and they are often quick to pin names on photographs of mystery bugs that are submitted. I uploaded my wasp photos, asking for a confirmation of my identification, and eventually Richard Vernier chimed in and reported that it was indeed the European tube wasp, Ancistrocerus gazella. Excellent!

Insects rank high on the list of animals that people wish to name. It's a vast and confusing world, and pinning a tag on that strange beetle that was in your basement can be tough. A trip to Bug Guide can help solve the mystery.

By the way, if anyone knows the status of the European tube wasp in Ohio, please let me know.
at November 13, 2011

This is a pretty common species in Michigan. A couple years ago, we embarked on a project to catalog the hymenoptera in our urban southeast Michigan yard. I think we're up to around 90 species, including five identified Ancistrocerus. Here's a photoset of some of the better pictures on Flickr: http://bit.ly/sBhEaV

Excellent info Julie, thank you! This tube wasp is probably a fixture around here as well; I just hadn't noticed them.

Yes, it's amazing how helpful the folks are over at Bug Guide they have saved me hours. My usual process for bug ID's is to spend an hour or so hitting the books and searching bug guide/internet. If after an hour I don't have an ID I'll ask on Bug Guide.