For better or worse, I get dozens of emails and calls every month from people who have questions about natural history. Many of these queries relate to mystery plants or animals. Fortunately, with good digital cameras now being ubiquitous, I often get a photo or two to help out in the quest for a name. 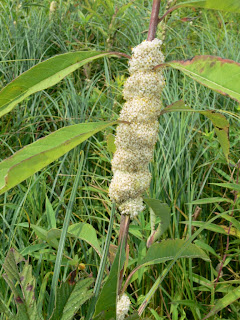 The strange looking plant above is not a pipe cleaner vining its way up that sunflower. It is the very odd -  and quite rare in these parts - rope dodder, Cuscuta glomerata. Dodders are bizarre parasitic plants that tap their nutrients from host plants, which they usually end up killing. There are eight species of dodders that are native to Ohio, and the rope dodder is perhaps the only one that is easily and instantly recognizable. 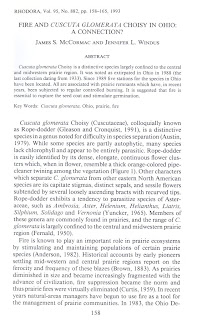 From my experience, many field botanists tend to shun dodders, perhaps because recognizing many of them to species is difficult. I've always rather enjoyed them, and even published a paper on the role of fire in germinating rope dodder, Cuscuta glomerata (above). I've also had a bit of luck with finding dodders in the field, and discovered the cuspidate dodder, C. cuspidata in western Ohio in 2002, which was a new record for the state. It has since been found in a few sites near to where I first found it, and is listed as endangered in the state.

Cuspidate dodder is not the only official rarity in Ohio's dodder world. Of the eight natives, two species are endangered, two are listed as threatened, and two are considered extirpated. The latter category refers to plants that have not been seen for at least twenty years in Ohio, and to botanists rediscovering one of them is somewhat akin to finding a Holy Grail. 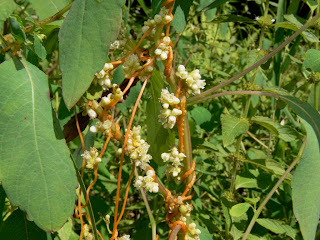 This is good ole common dodder, Cuscuta gronovii, which is our default dodder. If you see a dodder, chances are enormous that it'll be this species. Some people call it "spaghetti vine" as the orangish stems can twine over host plants in such luxuriance that it indeed looks as if someone tossed a colander of spaghetti over the plants. Separating some of the rarer dodder from this one can be tough. 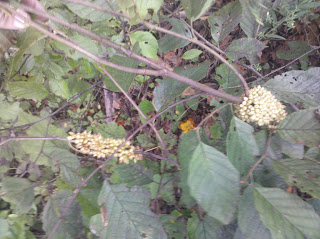 About a week ago, I was forwarded the photo above from a forester in DNR's Division of Forestry. A Jackson County landowner had sent them a few photos of this odd plant, and he wondered what it was. To me, this was sort of like finding a botanical pot of gold at the rainbow's end. The VAST majority of queries I receive are of common things: Cooper's hawks, ox-eye daisies, garter snakes, chipmunks, and so on. But every thousand or so contacts, BOOM! Something amazing comes to light. 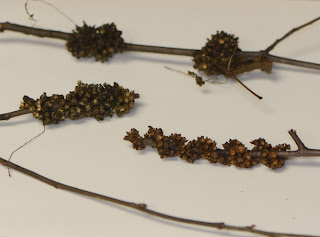 The Jackson County mystery plant was obviously a dodder, and I had a pretty good idea as to what species it was. So, I encouraged the landowner to go out and collect some specimens and ship them to me. And, bless his heart, he did. By the time we reached this point, the dodders were rather far gone, as can be seen in the above photo. But the pertinent parts were all still there, albeit a bit dry and crispy. 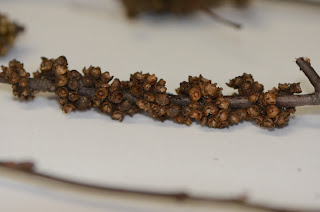 Two features stood out in the photos that I saw that sparked this tale. One, the rather dense ropelike growth habit - not that different than the rope dodder in this post's first photo. But these flowers were not bunched that tightly, and the habitat and host plant were all wrong for rope dodder. And it was the host plant that was also a major red flag that something interesting could be afoot. This dodder was growing on smooth alder, Alnus serrulata, in wet soil on the margins of a wetland. Very few of our dodders grow on woody plants, so the host should eliminate most of the species. 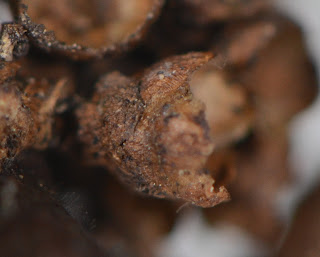 Anyway, with the dodder specimen in hand, I could look at the technical characters of the flowers in detail, which is necessary. Above is a close up image of a flower corolla and its bracts and sepals. Close examination of such features is essential to arriving at an identification.

The upshot is that our Jackson County landowner had found compact dodder, Cuscuta compacta, which was one of the species listed as extirpated in Ohio. Compact dodder had only been collected once before, in 1958, in... Jackson County! Although the location data on the 1958 specimen is sparse, it almost certainly was collected within a few miles of the site where it was rediscovered in 2011.

So, a plant thought to be long gone from Ohio has been rediscovered, thanks to the intellectual curiosity of a landowner who wondered about an odd plant and made the effort to get an answer. I'll look forward to visiting this site next fall, when the compact dodder is in full flower and looking good.

By the way, the specimens of compact dodder will not go to waste. I'll provide the material to the Cleveland Museum of Natural History herbarium as a permanent record of this discovery.
at November 05, 2011

Jim I just wanted to let you know how much I enjoy your blog I first discovered it through Nina's blog Nature Remains. I really appreciate the time and effort you put into providing both the detailed information and great photos. I also enjoy the wide range of topics you cover. I have taken the liberty of adding you to my favorites list.

All the best
Guy

Thank you very much, Guy! I'm glad you read and enjoy the blog!