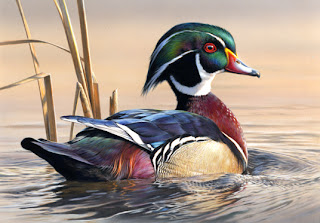 In case you hadn't heard, Joseph Hautman of Plymouth, Minnesota won the competition for the 2012-13 Federal Migratory Bird Hunting and Conservation Stamp, which is far better known as just the "Duck Stamp". Hautman's gorgeous rendering of a drake Wood Duck (above) will grace the new stamp, which goes on sale July 1st, 2012.

Incredibly, this win is Joe's 4th - quite a feat. Many cream of the crop artists vie to have their work featured on the stamp, and the competitions are always ferocious. Adam Grimm, a former Ohio resident and well known to many here, placed second with his painting of a Gadwall.

The Duck Stamp was first unveiled in 1934 as a vehicle to raise much needed funds for land acquisition. It's been a successful program, having raised over $750 million to date. Ninety-eight cents of every dollar raised by stamp sales goes to land acquisition - a percentage probably unmatched by any conservation organization. Nearly 5.5 million (MILLION!) acres have been purchased or leased with Duck Stamp dollars. Over 90% of the funds for Ohio's only federal refuge, Ottawa National Wildlife Refuge, came via the stamp program.

While waterfowl conservation is the driving force behind the Duck Stamp program, it's always important to keep in mind that an enormous collage of flora and fauna comprises the wetlands and prairies that are protected through this program. Botanists, birders, entomologists, and even mushroom hunters benefit in addition to waterfowl hunters. If you support conservation, consider buying a $15.00 Duck Stamp. They can be ordered RIGHT HERE. Besides, the stamps are miniature lickable works of art.
at November 01, 2011