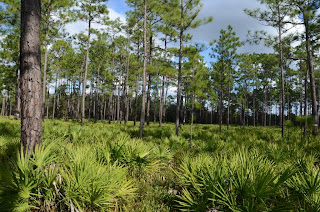 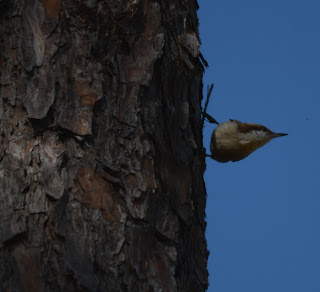 On my recent foray into the Okefenokee, finding Red-cockaded Woodpeckers was high on the list. As a consequence, I spent much time roaming the sandy pine flats. One of the first birds that will greet the pinewoods explorer is this charmer, the Brown-headed Nuthatch, Sitta pusilla. These inquisitive gleaners display great fidelity to one another, and a pair will forage together throughout the year. The birds more or less constantly emit a stream of squeaky chatters, and the notes sound like a dog's squeak toy ball.

A Brown-headed Nuthatch is truly elfin, weighing about ten grams and measuring only 4.5 inches. That's not much larger than a kinglet, and less than half the weight of a White-breasted Nuthatch. 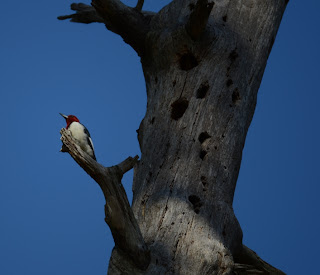 It would be harder to find a more woodpecker-rich habitat than a Georgia pine woods. Red-headed Woodpeckers, such as above, were very common. We also had scads of Red-bellied, Downy, Hairy, and Pileated woodpeckers, Yellow-bellied Sapsucker, and Northern Flicker. In addition to, of course, our target woodpecker. At times, I would see or hear six species of woodpecker simultaneously. 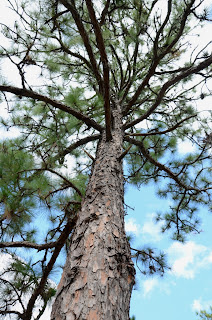 A towering longleaf pine, the Red-cockaded Woodpecker's tree of choice. Longleaf pine forests have suffered terribly, with only an estimated 3% of the original stands remaining. The wood of this species is especially durable and valuable, hence the lumberlust by the timber industry. Many stands have been replanted to faster growing slash pine or other species that will generate a pulpwood crop within a few decades. 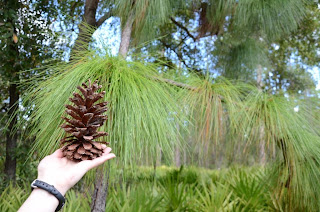 The massive cone of a longleaf pine, set off against its incredibly long, almost silky needles. To my eye, this may be the best looking of any of our native pines, and it has some serious competition in the beauty department. 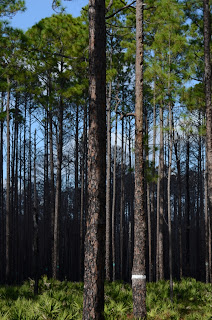 Finding colonies of Red-cockaded Woodpeckers isn't difficult. Active nest or den trees or conspicuously banded with a white stripe. That doesn't necessarily mean the birds are easy to find, outside of the active nesting season. RCW's are social animals, and will forage in loose groups, but often wander some distance from colony sites. The trick is to get oneself in the vicinity of an active denning area BEFORE dawn. Then just stand quietly, and enjoy the animals as they emerge and begin calling back and forth and foraging. Chances are, within five or ten minutes they'll have flown off to distant feeding areas. At least that was my experience. Only once, in all of our pinewoods roaming, did we stumble into a foraging group at midday, and they were much harder to observe. 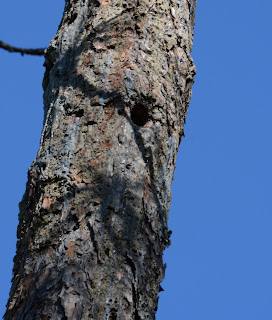 This is a natural RCW cavity. RCW's are the only North American woodpecker that excavates nest holes in living conifers. This habit is thought to be an adaptation that ups the odds of their survival in a habitat that is regularly subject to scorching fires. Older-growth pines are fire-resistant, thus the tree - and woodpecker nest - are likely to survive conflagrations.

Another interesting aspect of RCW nest cavities is the birds' propensity for drilling sap wells around the cavity's perimeter. By doing so, the woodpeckers trigger a sheet flow of gummy, sticky sap all around the nest site. The likely theory for this is that the tarry sap impedes the ability of predators such as high-climbing rat snakes to gain access to the hole. Plenty of viscous white pine sap is evident in the photo above. 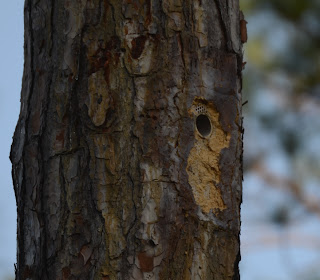 This is a nonnatural RCW nest cavity. A box with an appropriately sized entrance hole is placed high on a pine, in an excavated cavity. The biologists who install these are quite good at it, and the structure can blend remarkably well with the tree. It is thought that artificial cavities have helped to bolster RCW populations. There still aren't many birds. About 14,000 birds are all that's left. 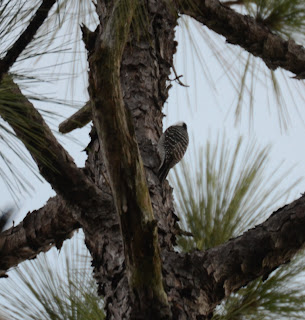 Finally, the Red-cockaded Woodpecker. Sorry for the lack of National Geographic quality images, but I made these photos at the cusp of dawn, when light was dim and the birds were not very close. We can see the complete ladder-backed appearance here; RCW's lack the central pure white back of Downy or Hairy woodpeckers, which are the most likely source of confusion. The RCW slots in between those two species in the size department. 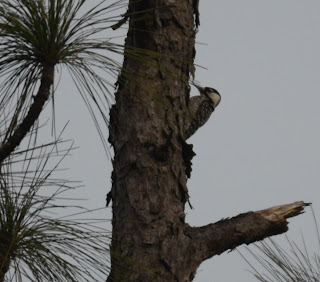 No mistaking an RCW from this angle. That big white cheek is a dead giveaway. Like most woodpeckers, RCW's are also rather vociferous and its likely you'll hear them before making visual contact. They give a loud, rather sharp but nasal squeak, suggestive of an effeminate Hairy Woodpecker. 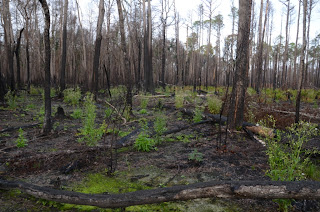 Red-cockaded Woodpeckers are intimately linked with fire, one of scores of species that in effect rise from the ashes. Fire maintains the open savanna-like pine groves that is optimal breeding and foraging habitat. For as long as there have been longleaf pine forests, fire has been a factor, regularly sweeping through and clearing the habitat. As foresters entered their 20th century love affair with Smokey Bear, fire suppression became the norm, and lots of fire-dependent animals and plants suffered. The science of fire ecology has made great strides and we have a much better understanding of the role of fire in ecosystems. As a result, RCW's, Karner blue butterflies, wild lupine and many other species are rebounding.

The Red-cockaded Woodpecker was listed as an endangered species in 1970; thus it was among the first group of animals to gain protection under the federal Endangered Species Act with its passage in 1973. At that time, fewer than 10,000 RCW's existed. With protection of its habitat and management techniques, the woodpecker population has grown by one-third. That's still precious few birds. I certainly hope this iconic bird of the southern pinewoods never goes the way of its larger cousin, the now extinct Ivory-billed Woodpecker.
at November 27, 2011

Wow, I tried finding RCW during my last trip to Florida and was not so lucky. Great posting Jim!

I got my life RCWs at Moody Forest, a Nature Conservancy property in Georgia. Until I read this I didn't realize how lucky I was to find them so easily - I managed to turn up a couple after just a few minutes of nosing around a longleaf pine stand. It was a lot like you describe, with 4-5 species of woodpecker plus Pygmy Nuthatches (love their squeaky toy calls) all working the trees.

I was lucky enough to find mine this past May in Louisianna after following the goofiest driving then walking directions ever! I was covered in mosquito bites when I was done but it was worth it!

Thanks for the comments, and glad that you saw these fascinating birds, Rebecca and Karen. Dwaynejava, try the east entrance/Suwanee Canal area of Okefenokee Nat'l Wildlife Refuge if you ever find yourself in that area!

I really envy you americans for all the great woodpeckers you have on your side of the Atlantic. Here in Europe we have just 6 or 7 species...

I did have the chance of seeing some american woodpeckers once on a visit to Virginia, I loved the Pileated woodpecker! Maybe in a future visit to your beautiful country I may find this red-cockaded woodpecker!

By the way, if you are interested in birds, you will probably like my Birds of the World blog, at www.planetbirds.blogspot.com

Thanks for sharing your blog, Pedro, and I hope you get back over here and find the red-cockaded woodpecker!