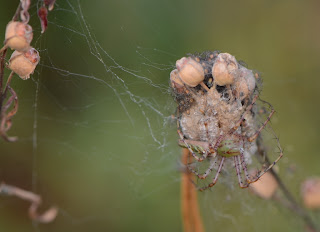 A fiercely protective female green lynx spider, Peucetia viridans, stands guard on her nest. This one had chosen a fruiting cluster of seedbox, Ludwigia alternifolia, in which to weave her saclike structure. The females are big spiders. Her body is nearly an inch in length, and throw in the legspan and you've got an animal that would pretty much cover a silver dollar. You'd notice this thing if you felt the tickle of one crawling up your arm. 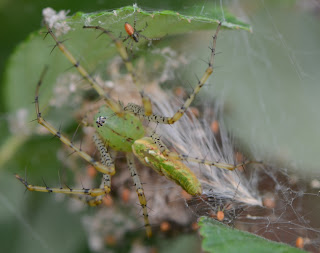 We found this spider and several others of its species in a bramble patch in an open longleaf pine flatwoods bordering the Okefenokee Swamp in south Georgia. I had never seen a green lynx spider before, but figured that it must be some type of lynx spider as soon as I clapped eyes on the beast. We've got a much smaller species in Ohio, the common lynx spider, Oxyopes salticus, and it is widespread and often abundant. It too is colorful and has impressively spined legs. 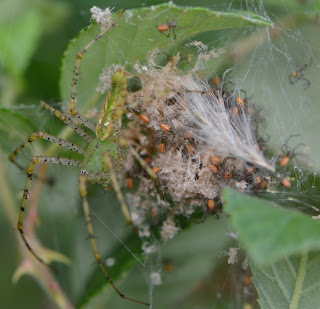 Note all of the spiderlings surrounding mom. If nothing too big and menacing happens by, they're probably in good hands. As I moved in close for these shots, the female spider would move with me and even seem to make hostile advances. Lynx spiders are active hunters, stalking the shrubs and attacking prey. They use those formidable spines that armor their legs to snare and box in their victims; sort of an Iron Maiden embrace of doom. 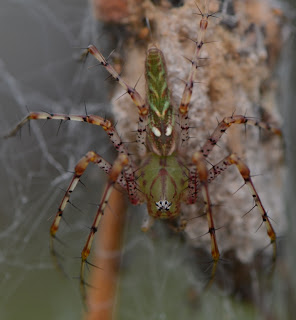 To my eyes, the green lynx spider is an impressive, good-looking arachnid. I'm glad that I was able to spend some quality time with these brutish animals.
at November 25, 2011

She does look formidable!

Yes, a formidably beautiful arachnid to be sure! Apparently their nests, before the spiderlings hatch, are faintly greenish and spiny, too!

Did you see any Okefenokee Fishing Spiders (Dolomedes sp.) while in the swamp? We get them fairly commonly down here in Florida in places like the famed Corkscrew Swamp Sanctuary near my house . . . .

No, I did not see that spider. I saw it mentioned in literature I was studying, and would have dearly loved to cross paths with one, but no such luck. Had I, you would surely have seen an Okefenokee fishing spider blog!

Find the entry for Tuesday, November 22nd and you'll see a female carrying an egg sac. The entries don't stay up for very long so hurry! We actually get three species of Dolomedes here in SW FL, all of which can be seen at Corkscrew Swamp.