The songs have faded...

I really miss the song of autumn about now. This afternoon, I took a brief wander through the local patch, and heard only the feeble swan songs of Carolina and Allard's ground crickets. These little black crickets are the toughest of our Orthopterans, or singing insects, and we'll hear the odd individual fiddling its wings into early December, if the sun shines brightly enough.
But for the most part, the entomological symphony, that grand wall of sound created by legions of katydids, coneheads, trigs, and crickets is gone. The singers have perished, leaving only their eggs to ride out the winter, and it'll be next summer before their life cycle comes once again to the point of music. 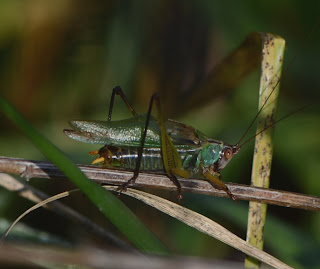 Just two weeks ago, I found myself in some marshy ground on an unseasonably warm day, and the singing insects were going whole hog, every bit as active as a bunch of drunks in a Karaoke bar. This black-legged meadow katydid, Orchelimum nigripes, was especially extroverted so I paused to pay him some mind. 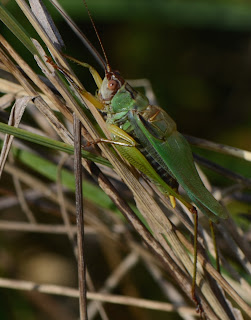 By November, the males are pulling out all the stops in a last ditch effort to woo a female. They know, intuitively, that their days are severely numbered. If they are to leave spawn, it is time to sing with all one's might! Attracting a girl is the ONLY thing that matters at this point.

This black-legged meadow katydid was really going at it, and was not much bothered by your narrator sticking a brightly flashing Nikon in its grill. The paler brown region on the katydid's back is its stridulatory region of the wings, and he was rapidly rubbing them as I took the photo. As were scores of others. That day, October 30, was the last day that I heard a full-bore salvo of insect song. 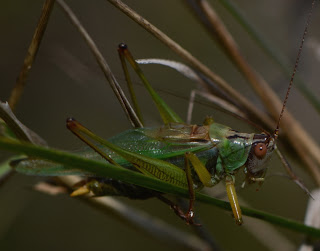 Meadow katydids might be considered the most charming of their ilk. There are a number of species, but all are neatly packaged and rather showy. As is the case with our melodious insect songsters, they sport exceedingly long antennae - far lengthier and more ornate than any grasshopper. The husky sputtering trills of meadow katydids are a ubiquitous sound of summer and fall, lisping forth from meadows and other unkempt open spaces. To my ear, they sound somewhat like an ill-tuned lawn mower firing up, or perhaps the mechanical clicking-ticking of an automated lawn sprinkler.


Click the short video above, and you can hear the meadow katydid for yourself. We'll have to make due with such digital fare for some time, I'm afraid, if its katydids we wish to hear. July is a long ways off.
at November 14, 2011

Hey Jim: Since you missed Millersville this year I wanted to let you know there is a lovely man who was there and has recorded all the songs - The Songs of Insects by Lang Elliott and Will Hershberger includes a CD - so you never need to be in silent space!
Best,
Donna

Yes, Wil and Lang are great and I certainly have their book! Much as I enjoy the cd, its still not the same as the real bugs.

This was my first full summer in The Country after a lifetime in The City, and the evening din of these insects was nothing short of astonishing. I sometimes had to work with headphones on, and I spent much of the summer, iPad in hand, parsing the sounds of the species involved.

One slight correction, though: attracting a girl is the only thing that matters at EVERY point...