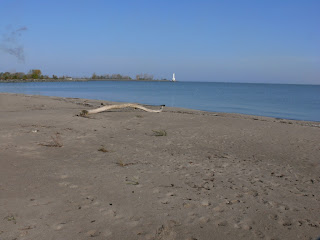 Last weekend, I spent some time on Nickel Plate Beach, which is just east of the Huron River's confluence with Lake Erie. That's the Huron lighthouse in the distance, anchoring the terminus of the Huron Municipal Pier. The lighthouse and its pier are well known to birders, and many a rarity has been spotted over there.

If you hit the pier, you'd do well to drive around to the other side of the river and have a look at Nickel Plate Beach. Lots of interesting birds can be seen just offshore, or on the beach itself. 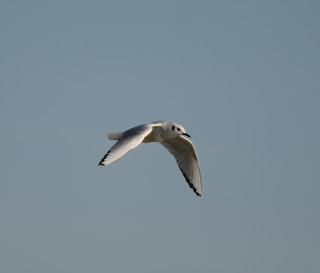 While stalking some Snow Buntings on the beach, I noticed a few hundred Bonaparte's Gulls, Chroicocephalus philadelphia, loafing and feeding in the nearshore waters. After I was through photographing buntings - more on those in a later post - I turned my lens to the gulls.

Bonaparte's Gulls are very handsome, and elegantly ternlike on the wing. The bird above is an adult, showing its prominent white wing flash on the forewing. In the breeding season, adult "Bonies" have a solid black head, as if someone dipped them in a can of ink. By now, they've lost the dark hood and sport only a bold black dot behind the eye. This is one of the small gulls, and it takes but two years for a Bonaparte's to gain its full adult plumage. The largest gulls, such as Herring or Great Black-backed Gull, require four years to achieve adulthood. While the Bonaparte's Gull is not the smallest of the world's gulls, it's close. It would take almost nine of them to match the weight of a Great Black-backed Gull. 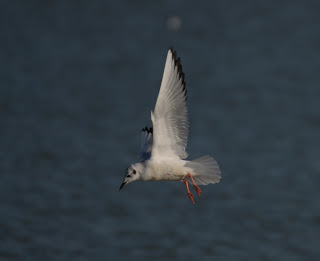 There are always plenty of fish to be found where large rivers meet Lake Erie, which is one reason that sites such as Huron are often bird-filled. This day, the Bonaparte's Gulls were actively fishing just offshore from the beach, and the feeding birds had a regular pattern of foraging. I was able to get fairly close to the small gulls as they would hover over schools of shiners or some other small fish before dipping to the surface and snagging a victim.

The sound effects that accompany a large flock of Bonaparte's Gulls is distinctive, and somewhat comical. They make loud sharp calls that sound like a squeaky growl. Dozens or hundreds concentrated in a small area can create quite a cacophony. 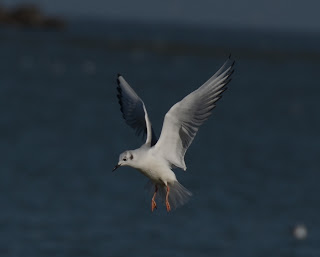 Bonaparte's Gull breeds throughout much of the Canadian and Alaskan taiga - the northerly reaches of the boreal forest. Bonies are unique among the gulls in that they nest in trees. I have seen their arboreal stick platforms, and while in Churchill, Manitoba even climbed a stunted black spruce once to have a look at the eggs. The adults were quite displeased and did their best to knock some new holes in my head.

The Ohio waters of Lake Erie is one of the major staging areas for migrating Bonaparte's Gulls. Last weekend, there were perhaps 1,000 of them in the general vicinity of Huron. Those numbers will continue to grow through November, and will reach a crescendo near month's end. Estimates of up to 100,000 birds have been made in a morning from favored Lake Erie locales. That's just a smattering of the true numbers that are probably present, as many of the gulls will be far from the view of onshore observers, well out in the lake.

Some sources peg the total population of Bonaparte's Gull at a high of around 350,000 birds. Even factoring in a liberal percentage of error on estimates, it's very obvious that a very significant portion of the global Bonaparte's Gull population depends upon Lake Erie.
at November 06, 2011