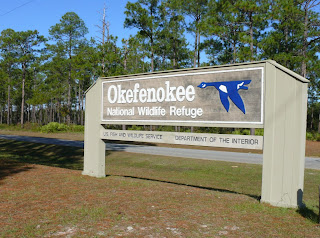 I'm just returned from an immersion into one of our country's most iconic wetlands, the sprawling 400,000+ acre Okefenokee Swamp of southern Georgia and northern Florida. An in-depth look into the Okefenokee had long been on my list, and after spending three days exploring its fabulous habitats, I have a much better understanding of this incredible place. As always, many photos were made, and plenty of interesting creatures were found. 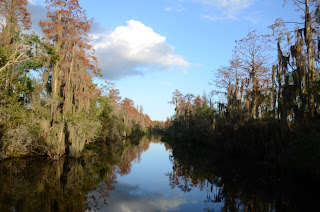 The still black waters of the Suwanee Canal are often described as "mysterious". I suppose that's an understandable thought, as one can't see more than a few inches below the surface. As gators, moccasins, and other potentially scary critters lurk in the depths, the Okefenokee waters are indeed mysterious to most.

I was able to penetrate a fair ways into the swamp on a skiff, and see lots of interesting terrain. The Okefenokee is a place of great beauty, its tannin-stained waters refecting the images of golden-needled cypress and blue skies. Excepting the occasional boatload of touristos traveling down the canal, there are no people and the swamp is far from the hubbub of highways and towns. 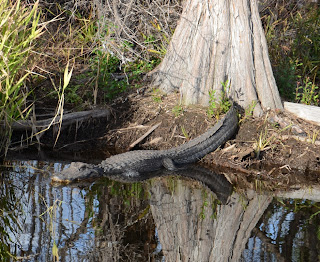 Alligators aplenty roam the Okefonokee. An estimated 10,000+ of the massive reptiles swim in the swamp, and if the temperatures crest 60 degrees, you're sure to see some. 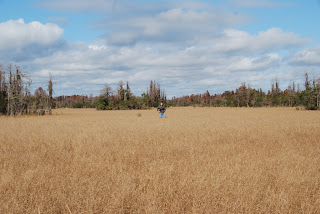 Your blogger far out in one of the Okefenokee's "prairies". It was a real treat to have the chance to wander far off the beaten path and into some of the massive wet meadows of the Okefenokee. I am standing in a sea of horned beakrush, Rhynchospora inundata, and other wetland sedges.

Okefenokee is a Choctaw word meaning "quivering earth", and it isn't hard to see why it's called that when walking across the soggy quaking peat. I saw some great plants out in the prairies, including a fabulous botanical carnivore.

I'll be back soon with some closer views of some of the Okefenokee's extraordinary flora and fauna.
at November 24, 2011

Nice shot of the Alligator I am looking forward to the rest of your post.