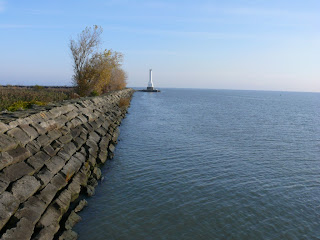 The not always placid waters of Lake Erie lap at the Huron jetty, which encloses a large spoil impoundment. Back in the day, when the dredged muck was still being sprayed into this basin, the impoundment was a huge mudflat and a beacon for birds. Many a rarity was found, including Ohio's only Spotted Redshank (1979), and our first record of Arctic Tern (1980). Even though the impoundment has been swallowed up by a luxuriant cloak of giant reed, Phragmites australis, the Huron Pier and its environs remain one of the most interesting and productive locales on Lake Erie, especially in the fall.

I was here Sunday, on a whirlwind trip from Huron to Magee Marsh. My dream? Discover Ohio's first Ash-throated Flycatcher. I didn't, or this blog would be titled differently. Ash-throated Flycatcher is WAY overdue, with scores of records in eastern North America, including, I believe, every state around Ohio. I figure the inaugural specimen will be found at the tail end of October or in November, and likely at a place such as Huron.

In spite of the Ash-throated choke, I saw lots of interesting birds at Huron. First of season Snow Buntings. Flyover Pine Siskins. Three flyby Surf Scoters. Hundreds of delicate little Bonaparte's Gulls. Six species of sparrows lurking in the Phragmites. And much more. 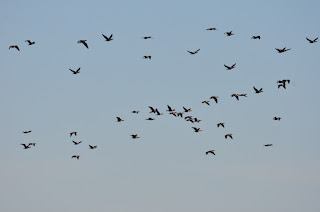 But the dominant bird, bar none, was Double-crested Cormorant, Phalacrocorax auritus. Great platoons of the fish-eaters constantly streamed by, nearly all of them on a west to east trajectory. In my 2.5 hours at the Huron Pier and nearby Nickel Plate Beach, I estimated that 4-5,000 birds winged by, assuming they were all different and that the flocks weren't circling around. 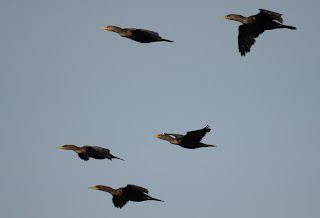 Of the cormorants that were close enough to see well, nearly all were juveniles with their dusty brown throats and breasts. Less than 10% and probably well under that percentage were adults.

There is no question that Double-crested Cormorants are being cranked out in record numbers on the Great Lakes; perhaps unprecedented numbers. Like some other fish-eating predatorial birds such as Bald Eagle and Osprey, Double-crested Cormorant populations plummeted from the 1950's through the 1970's, as the effects of unregulated use of DDT wreaked havoc on the food chain. Spurred by Rachel Carson's landmark book Silent Spring, environmentalists began railing against DDT and demanding it be banned. President Richard Nixon's newly created Environmental Protection Agency reviewed the issue in 1971 and rejected a ban, declaring that the chemical was not harmful to wildlife or people.

Confronted by overwhelming scientific evidence as to the dangers of DDT, the EPA's hand was forced and in 1972 the agency disallowed nearly all uses of the chemical. Not surprisingly, chemical companies sued over this decision, but a U.S. Appellate Court upheld the ban.

And birds began to recover. 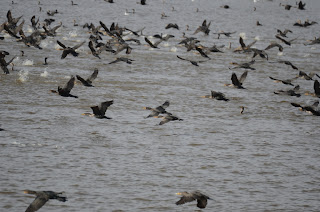 Part of a cormorant concentration that numbered into the thousands skitters across Sandusky Bay, Ottawa County, Ohio yesterday.
I recall from my early days of venturing to Lake Erie, in the mid to late 1970's, that spotting a Double-crested Cormorant was a momentous occasion. There just weren't that many around. According to Bruce Peterjohn's book Birds of Ohio (2001), by the mid-60's observers noted fewer than ten sightings of cormorants annually, and nearly all reports were of fewer than ten birds.
By the 1980's Great Lakes Double-crested Cormorants were booming, and Canadian biologist Chip Weseloh documented increases of nearly 30% annually in breeding populations. While this nearly exponential growth has slowed, cormorants are still thriving.
While crossing the State Route 2 bridge over Sandusky Bay, I glanced over at a rocky islet on the north side of the bridge and saw it was carpeted with probably 1,000+ cormorants. What's more, hundreds and hundreds of others were swimming and flying about, even more birds than I usually see here. I made a detour to a good vantage point and made the video above. It shows but a snippet of the birds that were present. Based on my observations, I would say that as many as 5,000 cormorants were around the mouth of Sandusky Bay yesterday, maybe even far more than that.

Not everyone accepts the presence of all of these fish-eating birds. Fishermen, especially, get their dander up over cormorants. The rod and reel crowd, perhaps understandably, tends to think that the cormorants compete for prized yellow perch and walleye. But the scientific evidence suggests that they don't. A 1997 study, HERE, analyzed the stomach contents of 302 cormorants and found that the primary prey were gizzard shad, freshwater drum, and emerald shiners - fish species of little interest to Lake Erie fishermen.

In recent years, the health of Lake Erie has nose-dived, and that's a topic I hope to find time to write about soon. I wonder if the Double-crested Cormorant population will also begin to fade, as the big birds once again serve as a barometer of Man's ravages to our ecosystems.
at October 31, 2011

I'm really glad you posted this! I got a photo of one of these birds on Lake Snowden a couple of weeks ago, and it's been driving me crazy since then. I couldn't figure out what kind of bird it was.

See the ones in the Dispatch on Sunday,were labeled as egrets.

Glad this post was of help to you, Kayleigh, and glad it was of interest to you, LH!

Yes, I saw that miscaptioned photo, Bill - a real blunder on the identification!