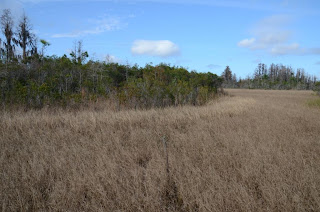 One of my goals while in the Okefenokee Swamp was to see carnivorous plants. This vast 400,000 acre wetland abounds with them. November is not the ideal month for peak glory in the meat-eating plant world, but one species still looks cool even in early winter. To reach the really robust populations involved a lengthy boat trip, skiffing over the shallow black waters of the swamp, and ultimately poling the craft through shallows that would have gummed the boat's prop with gunk. We then debarked and set out on foot through the expansive sedge mats to explore the margins of shrubby copses, such as above. 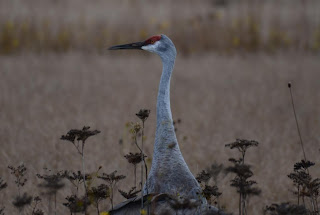 Many fine animals were seen on the journey, including this especially tame Sandhill Crane. Boats are always effective vehicles for viewing wildlife, as animals often permit much closer approach than they would if one were on foot. 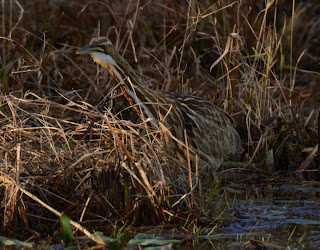 It was a pleasure to encounter this American Bittern actively stalking its prey. At one point, we registered on its radar, and it went into its reed-bending-in-the-wind display, holding its neck skyward and gently swaying back and forth. 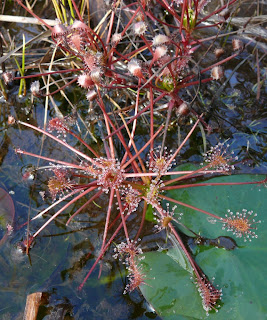 Ah! The real botanizing began once we jammed the boat against a peaty shore and hopped out to cast around on foot. It wasn't long before we encountered a platoon of spathulate-leaved sundew, Drosera intermedia. Click the photo and admire the glistening "dew drops" tipping the hairs of the leaves. While each drop resembles a water droplet, it is actually a viscous secretion produced by the plant. These tiny herbaceous carnivores use the droplets, and probably other chemical cues, to lure small insects. When a naive bug alights on a leaf, expecting a tasty snack or a refreshing draught, it is instantly snared and held fast by the gluey drops. This triggers the leaf to begin folding over in a relentless death clutch, bringing yet more dew-tipped hairs into contact with the victim. In short order, the insect's soft parts are drained of its proteins and nitrogen - a clever evolutionary adaptation to surving in substrates largely bereft of such necessities. 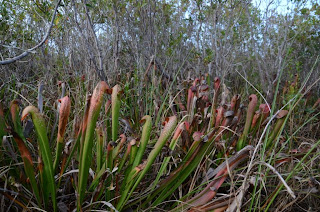 Looking like baskets of rearing cobras, a luxuriant colony of hooded pitcher plants, Sarracenia minor, thrusts from the mire. It was this spectacular botanical carnivore that I had come to see, and I wanted to see them in luxuriance, deep in the "swamp". The hooded pitcher plant is truly one of North America's most sensational carnivorous plants. Chances are you'll have to travel to see it in its wild haunts. It's confined to the Atlantic coastal plain, and nearby areas, of Florida, Georgia, and South and North Carolina. 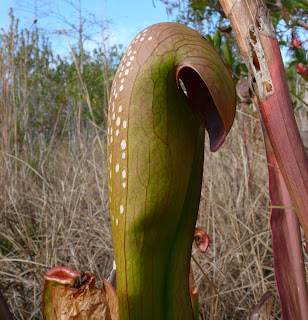 A closeup of the summit of the highly modified leaf, showing the cobralike hood. Note the translucent dots on the back of the pitcher. They may serve to draw in flying insects. 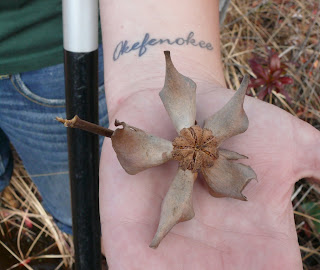 An old flower head, held by our guide Jen. Note her Okefenokee tat. 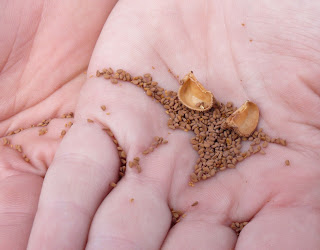 Seed production is prolific in Sarracenia minor. The seeds are rather hard and pelletlike; possibly an adaptation for long-term seed banking in the rich peaty soils. 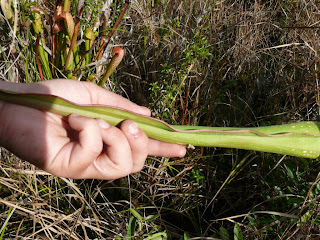 This winged flange that extends the entire length of the pitcher leaf is essentially the highway to doom for insects foolish enough to be drawn in by the plant's trickery. We observed many ants clambering up these pitchers, and an enormous variety of other insects will make the climb. The pitcher secretes chemical lures that are concentrated along that flange, which is also painted with anthocyanic (purplish) pigments that provide a visual lure. The upshot is that bugs are deceived into believing that there is a food reward to be had by scaling to the summit of the pitcher. Once the hapless victim has summited, it is likely to enter the gaping maw of the plant, and tumble in. 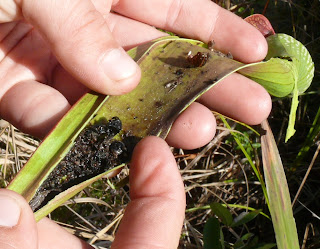 Pitcher plant sludge - the residue of the undigestable portions of scores of insect victims. The plant has extracted the nutritious portions of the animals, leaving only exoskeletons. Carnivorous plants are a strange, fascinating part of our plant world, and seeing these hooded pitcher plants in the wilds of the Okefenokee was a real treat.
at December 02, 2011

So, where do I sign up for the Birds & Botany II--Florida Edition? This all looks so cool!

It is cool! I would love to assemble an expedition down to the Okefenokee next year, if enough people were interested.