A fly in the pitcher

In response to my last post, on the carnivorous hooded pitcher plant, Brian Menker sent along an interesting email and a great photo. He reminded me of the 2006 Ohio Botanical Symposium, where we heard Dr. Greg Dahlem of Northern Kentucky University give an interesting talk entitled "Critters in Pitchers". Dahlem delivered a fascinating pictorial expose of the various small animals who cheat the fate of most of their kin, and have evolved strategies for living and breeding within pitcher plants. 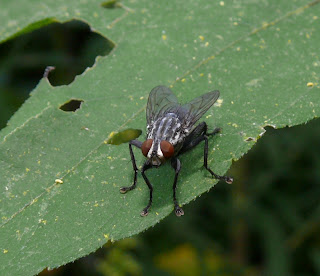 A small fly regards your narrator with inscrutable blood-red eyes while perched on a giant ragweed leaf. I took this shot on August 16, 2009 in Miami County, Ohio. It is one of the legions of species in the fly family Sarcophagidae; the "flesh flies". Although it resembles the common house fly, note its foot pads - probably an adaptation to help it avoid sinking into unspeakable substances.

If there's one thing you don't want to come back as, it is a flesh fly. These insects are tasked with some of Nature's most gruesome roles. They flock to the nastiest of the nasty: decomposing animals, dung in every form, even the raw bleeding wounds of mammals. Once a suitably hideous substrate has been located, the female flesh fly deposits her eggs into the foul gruel. They quickly hatch, and it is the wriggling white grub's lot in life to consume whatever mess Mother Fly has stuck them in. 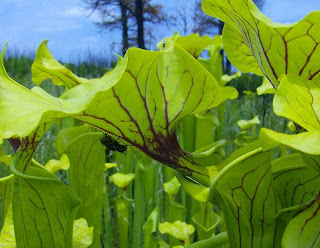 Photo: Brian Menker
So, how does Brian Menker play into this morbid tale? Does Brian even want to factor into this story? Well, yes, he does. A keen biologist and ranger with the U.S. Army Corps of Engineers, Brian remembered the aforementioned Dr. Dahlem's pitcher plant lecture, and knew that a few species of Sarcophagid flies have evolved to utilize the decaying gunk found within a pitcher plant leaf. On a 2007 trip to the Carolina Sandhills National Wildlife Refuge in South Carolina, Brian and company found themselves in a colony of yellow trumpets, Sarracenia flava, one of our most striking species of pitcher plant. While admiring the plants, he noticed a fly lurking below one of the plant's hoods, and made the photo above. 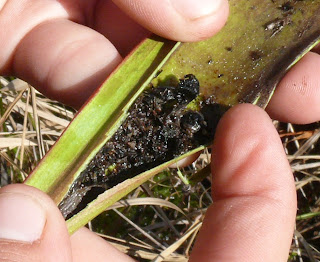 Brian's fly is one of the flesh flies that plies its trade within the normally fatal realm of the pitcher plant. For most bugs, entering one of these vegetative traps means its curtains, sure doom, lights out, baby. But not for the fly. It manages to successfully deposit its eggs within the rotting mass of undigested bug debris at the bottom of the pitcher. In short order, the grubs pop from the eggs, and snap to life in this viscous smelly goo. It is their fate to wallow about in the chitinous mire, consuming whatever it is that is edible down there. After a few days, suitably fattened, the grub prepares to pupate. It somehow extricates itself from the botanical death chamber - or perhaps pupates in the wastes of the pitcher plant - and eventually transforms into an adult fly and carries on its species' gruesome lifestyle.

The fantastically complex web of Nature goes far beyond even the most vivid imagination. There are myriad animals out there, doing their thing, and we have no idea they even exist. And somehow, even if seemingly unfathomable to our constrained minds, each of them plays some vital role in the whole shebang of Mothership Earth. Even these flies.

But, I told you that you probably wouldn't want to return as a flesh fly.
at December 02, 2011

So how do the larvae of Papaipema appassionata (Pitcher Plant Borer Moth) escape a gory fate from its host? Never could figure this out.

I did some more research about my previous question regarding The Pitcher Plant Borer Moth. From this website, it seems the larvae bore into the rhizomes of the plant and often kill it.

There is another moth larva that also bores into pitcher plants Endothenia daeckeana.

I don't know that I've ever heard Mother Earth referred to as a "shebang" before, but it's certainly apt.

Reminds me of when I dumped out a bag of Japanese beetles, surprised to see all the grubs (some quite large) living on the dead beetles.