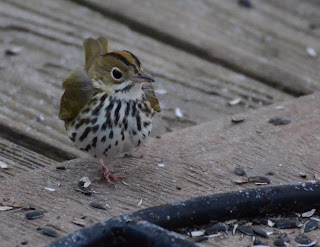 As reported here on December 8th, this Ovenbird, a Neotropical migrant warbler, was found at Inniswood Metro Gardens on December 7th by Jen Snyder and Jennifer Kleinrichert. As I am especially interested in warblers and their ways, I resolved to go visit the animal if it stuck around long enough for me to work it in. 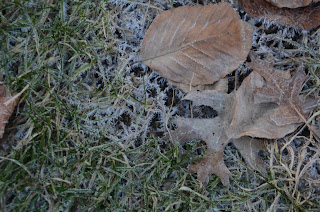 Jennifer has been great about providing status updates on the Ovenbird, as it does not seem to have a Facebook page. As she reported that the warbler was still present yesterday, it was off to the gardens for me bright and early this morning. And a frosty morning it was, with rime glazing the earth's crust and temperatures hovering around the 21 degree mark. 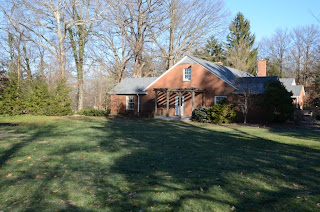 The beautiful Innis House, located smack in the middle of this botanically diverse 123 acre metropark. Over 2,000 plant species can be found; an interesting palette of nonnative ornamentals mixed with native flora and habitats. Our destination? The backyard of this dwelling, which is to your left. 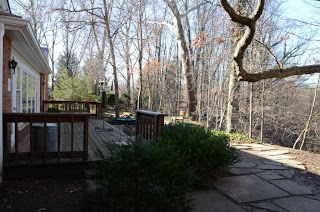 A battery of feeders lures an excellent range of songbirds and others, and the backyard overlooks a well-wooded ravine carpeted in mature white oak and other native trees. An ideal setup for attracting birds, and a likely spot to host a rarity. We didn't have to wait but a few minutes, and out sashayed the chilly little Ovenbird, waltzing from the cover of a yew as if it were a fine spring morning. In this photo, the animal has assumed its typical tail-cocked look. I did notice that every now and again, the Ovenbird would tuck one or the other of its legs up, no doubt in an attempt to warm its appendages.

The bird feeds on seed cast to the deck from other feeder visitors, and also spends time scratching in the leaf litter under nearby shrubbery. Ovenbirds are habitual ground feeders that pick through leaves seeking various small arthropods, and cold as it is, the hard-working Ovenbird no doubt is able to find some spiders and other tiny animals. 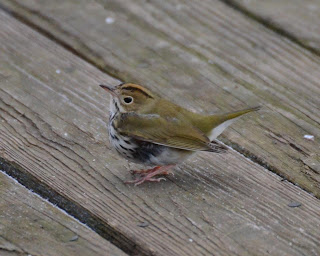 We observed a wound or injury of some sort - not too surprising, as one would not think a healthy, highly migratory Ovenbird would remain into a cold, tough Ohio winter. Although the bird can fly, and I couldn't detect any handicaps, it has suffered some sort of apparent trauma to its left flank. That blackened patch below its wing that is evident in this photo may be the result of an encounter with a raptor, an injury suffered from a building strike, or who knows what. Whatever its cause, I suspect our Inniswood Ovenbird has health issues that are preventing it from making the long journey to its tropical wintering grounds.

At least a few Ovenbirds have been known to survive the entirety of an Ohio winter, and I hope this bird does too. Thanks to Jennifer Kleinrichert for keeping us current with its status via the Ohio Birds listserv.
at December 11, 2011

i know there are oppositions to my thinking, but if this ovenbird was in my yard, I would be putting out small mealworms hoping to get him healthy and southward bound.

How about taking the Ovenbird to the Ohio Wildlife Center Veterinary Hospital to be checked out for travel? I would think there would then be someone traveling south for the winter that could take the Ovenbird to CROW, Clinic for Rehabilitation of Wildlife on Sanibel Is. in FL. Once it is fully healed, they would release the bird in appropriate habitat.